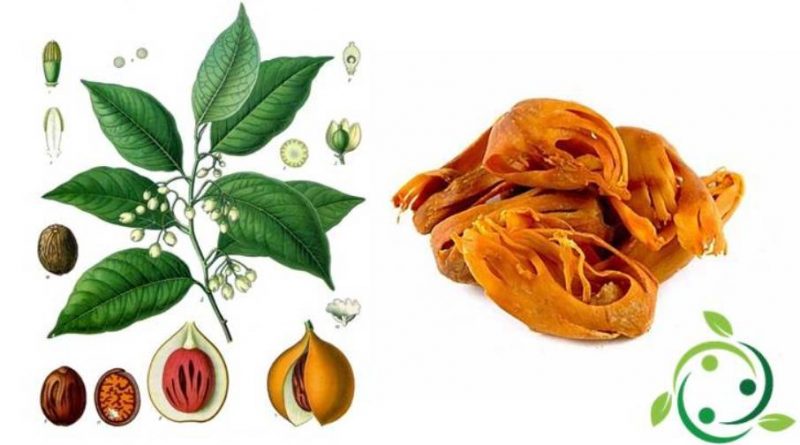 The mace, also known as mace or nutmeg flower is a spice obtained from the fruit of the Myristica fragrans Houtt., 1774.

Origins and History –
The mace is a spice originally from the Moluccas islands and is a spice known in Indonesia since ancient times.
Pliny describes it as “the red bark of an unknown tree”.
Imported from Indonesia to Europe by the Arabs, today the mace is mistakenly called “nutmeg flower”. In reality it is the fleshy membrane that surrounds the nutmeg itself.
Used whole or chopped, the mace was the favorite spice of the head chef of Charles V, for timbales, pates, cakes or focaccias.
Its subtle taste cannot stand the combination with other aromas other than pepper or cloves.
In the 1700s it was ten times more expensive and valuable than nutmeg.
In this regard, the story is told of a gentleman who, in exchange for phantom “mace trees”, cuts down all the nutmeg trees of his lands to deliver a large sum to an adventurous merchant.
In the East it is mainly used for its healing properties: the infusion of some fragments of mace (soaked in water), combats nausea, helps digestion and solves problems with the bronchi.

Description –
The mace is a part of the fruit of Myristica fragrans, an evergreen tree, which can reach a height of 20 m. The mace is the internal part of the fruit (endocarp) and covers the seed, which is the best known nutmeg, another spice obtained from the same plant.
Flowering occurs in trees that are over 15 years of age and the flowers are yellow in color which then give rise to the fruit which inside contains the external part of the seed which is used as a spice.
The mace is bright red in fresh fruit; turns orange with drying.
The mace, after being separated from the seed, is left to dry in the sun for a day or two. It can still be used fairly fresh as an aroma, but very often drying is completed, in order to give it a more pronounced scent, closing it in wooden cases for three or four months.

Active principles –
The mace being dried contains little water (around 8%).
It has a good concentration of 38% starches, 6% proteins, 26% lipids including essential fatty acids and a lot of fiber, over 20%.
In addition, mace contains many mineral salts including calcium, iron, potassium, sodium, magnesium, manganese, selenium, phosphorus, copper and zinc.
This makes it an excellent natural supplement of natural salts.
The mace also has a good reserve of vitamins and in particular it is rich in vitamins A, C, E and many of the group B (B1, B2, B6).
In addition to the nutrients, mace also contains many active ingredients such as elimicin, phenols and essential oils such as myristicin, safrole, eugenol, pinene and sabinene.

Properties and Uses –
In oriental cuisine and in particular in Indian cuisine, mace is very famous and used especially in traditional recipes and we cannot remember the famous spice mix called curry.
The taste of the mace is delicate and its aroma is sweet and intense.
The mace is counted among the spices of the herbs of the diaphoenic (or diaphoenix) an ancient natural remedy very popular in France because it was adopted by the “Pharmacopée de la Compagnie française des Indes orientales”. Herbs such as ginger, saffron, cinnamon, black pepper and rue (ruta graveolens) were included with the mace.
Mace is often held up as a drug or a powerful stimulant because of the reputation of nutmeg.
The mace, since ancient times, is used in traditional oriental medicine especially in Chinese medicine and Indian Ayurvedic medicine.
Its main use is aimed at helping in the problems of the nervous system having efficacy also against depression and anxiety derived from stress.
In fact, the mace is a relaxant of the nervous system and is used precisely to rebalance tiredness conditions.
Within the mace phytocomplex there are substances such as elimicin and myristicin that act as brain stimulants thus helping the total rebalancing of our body.
The mace is excellent against mental fatigue as well as to combat stress at a more general level.
The mace contains substances such as eugenol that have an active effect on inflammatory states. It acts by inhibiting the synthesis of prostaglandins and therefore has an effect on the mediators of inflammation and pain.
The anti-inflammatory properties of the mace are also indicated in the treatment of pains such as arthritis and rheumatism as well as for other types of pain that is localized.
Even headaches can be treated naturally with mace as well as toothache always thanks to the calming action of pain by eugenol.
The mace is even included in some natural toothpaste recipes with an excellent action for the health of the teeth and the treatment of halitosis.
The essential oil extracted from the mace is also indicated for the treatment of joint and muscle pain thanks to its sedavite and analgesic properties.
The mace: helps the heart, eyes, lungs and stomach and is also active thanks to its nutrients such as the presence of potassium which is an essential mineral salt for the control of blood pressure and heart rhythm.
In addition, the presence of beta-carotene in the phytocomplex gives it a strong antioxidant action that counteracts cellular aging by free radicals.
Beta-carotene is the precursor of vitamin A which is then used to establish good eye and skin health.
The use of essential oil also finds space in the formulation for cough syrups and respiratory problems.
Even in the event of a cold, the use of mace is indicated as it is also a natural antiseptic, an antibacterial and even an antifungal.
In ancient herbal medicine, mace was also used in the treatment of asthma.
Finally, mace is an excellent spice to help digestion and avoid intestinal gas thanks to its carminative action, it is a valuable remedy for flatulence and abdominal bloating.
Among the contraindications, it is recommended to avoid it in pregnancy.

Preparations –
This spice, known especially in the countries of South East Asia, is rarely used in Italy so it is difficult to find it in shops or supermarkets while it is easier to buy it online.
Once the vacuum pack has been opened, it is advisable to transfer the spice into a hermetically sealed container or envelope and keep it in contact with air as little as possible.
The mace which, as mentioned, has a more delicate flavor than nutmeg, is used in the kitchen for savory dishes with a light and bright color, yellow or orange, in a similar way to saffron, as well as in the preparation of spice mixtures (e.g. for example, curry), in spiced vinegars, for storing vegetables or in the preparation of homemade liqueurs such as nocino or cherry stone liqueur. It adapts very well to the spices used to make mulled wine.
It is pleasant in cheese sauces and freshly grated.
In Indonesian cuisine, mace is used to flavor sweets and pies or even nougat, caramelized fruit and honey.
In addition, mace can be used like nutmeg, to enrich a puree or to spice a jam.
Even fish can be enriched with mace so creams for desserts or even infusions and tea. In short, it is a spice that goes well with sweet and savory dishes.