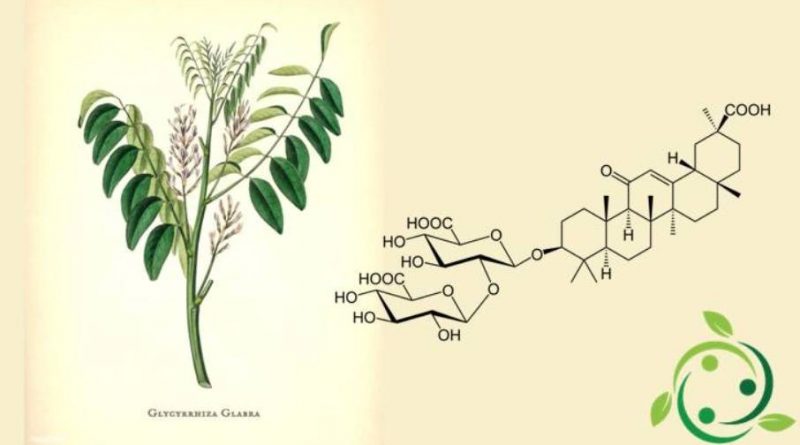 Glycyrrhizin, also known by the names of glycyrrhizinic acid or glycyrrhizic acid is a tri-terpenoid saponinic glycoside with brute or molecular formula: C42H62O16.
The term, in the official IUPAC nomenclature of this molecule, is: acid (3-β, 20-β) -20-carboxy-11-bone-30-norolean-12-en-3-il-2-O-β- D-glucopiranuronosil-α-D-glucopiranosiduronico.
Glycyrrhizin represents the active ingredient of the licorice extract. In acid form it is not particularly soluble in water, but its ammonium salt is soluble for pH values> 4.5.
This compound, extracted from the root of licorice (Glycyrrizha glabra L.) where it is present in concentrations ranging from 2 to 4%.
Licorice is a perennial plant with horizontal underground stems (called stolons). The drug (i.e. the part of the plant containing the active substance) is represented by these stolons, which are collected in the autumn.
Licorice has been used by medicine since ancient times. It is one of the drugs most used in traditional Chinese medicine and remains of the plant were also found in the tombs of the pharaohs. Doctors of ancient Rome and Greece prescribed it to treat coughs, ulcers, malaria, abdominal pains, kidney and liver colic, heartburn.

In the pharmacological field, this compound is used as an expectorant and as a gastroprotector in the peptic ulcer.
It is also used as a food sweetener, being up to 50 times sweeter than sucrose and compared to which the sweet taste is perceived later but remains longer in the mouth.
Compared to the synthetic sweetener aspartame, it continues to impart a sweet taste even after heating.
In case of high intake or overdose of glycyrrhizin some side effects can be hypertension and edema, due to the accumulation of sodium ions and water. Glycyrrhizin inhibits the enzyme 11beta-hydroxysteroid dehydrogenase which, in a physiological situation, catalyzes the formation of cortisone (less active form) starting from cortisol (active form).
Cortisol can act similarly to aldosterone on mineralocorticoid receptors, with consequent increased reabsorption of sodium and water in the renal collector tubule. However, the use is not recommended for those suffering from high blood pressure.
According to the American Journal of Epidemiology, there could be an increase in the probability of cognitive and behavioral disorders in children of women who have made a large use of it during pregnancy: according to Seckl and Katri Räikkönen, of the psychology department of the University of Helsinki, glycyrrhizin can damage the placenta, allowing some stress-related hormones to pass which are produced by the mother’s body.