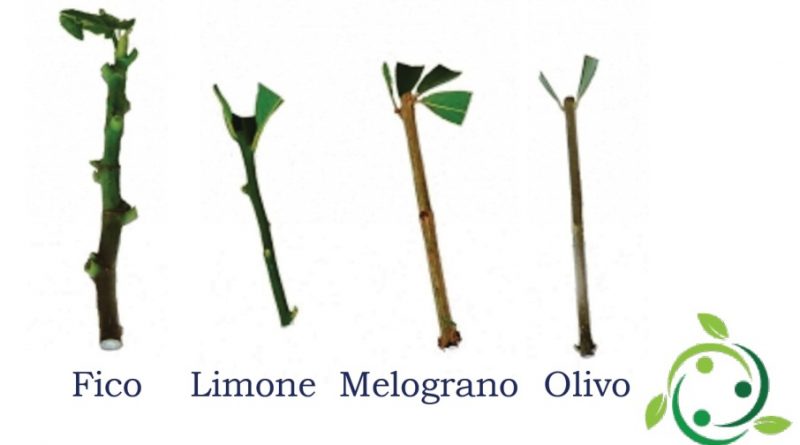 The term cutting means a portion of a plant which, specially cut and placed in a fertile substrate, is capable of perfectly regenerating the plant of origin.
The reproduction of a plant, starting from the cutting, is an agamic reproduction, that is, obtained without the aid of the reproductive phase.
Propagation by cuttings is a possible technique, which also occurs in nature, and which is made possible by the great regenerative properties of plants, in particular that of differentiating the root tissue from the undifferentiated (meristematic) tissue that is found in very thin sub-epidermal layers in various parts of the plant.
In the plant kingdom, in fact, the cells are totipotent and capable of regenerating lost parts much better than in the animal kingdom.
Cuttings can have different consistencies and come from different parts of the plant.
In general, the young and green stem segments are called herbaceous and have greater vitality than the woody ones: in particular, the apical cuttings, therefore those with germinative apices, are distinguished by a higher content of auxin compared to simple segments cut both from the top than from the bottom.
To obtain a herbaceous cutting of stem, this is cut just below the attachment of the petiole of a leaf (internode), therefore at the point where more roots generally develop. In this procedure the leaf located at the cut is eliminated from the cutting.
However, the rooting of more woody cuttings, with large reserves of stock substances and little or no foliage, is also quite common. This technique is used for example in the case of different tree species.
Four types of cutting are distinguished according to where the portions of the plant are to be reproduced:
1. Herbaceous cutting;
2. Woody Cutting;
3. Root cutting;
4. Cactus cutting.

– Herbaceous cutting: the herbaceous cutting is obtained in late winter or spring, by taking an apical portion of a branch, or a small sprig, trying to keep a “foot”, or a small part of the rind of the branch to which it was attached . In general, herbaceous cuttings are very suitable in the case of herbaceous plants, perennials, or lively plants, and also for small shrubs; less indicated in the case of large trees or shrubs, in this case in fact the young shoots generally have few nutrients stored in their tissues and are able to live for a very short time if separated from the mother plant.

– Woody cutting: woody cuttings, in turn, can be distinguished between woody and semi-woody cuttings. The semi-woody cuttings are obtained in summer, taking portions of the young branch, but already partially lignified, cutting just below a knot; this type of cuttings are taken from trees and shrubs and can be apical, that is, include the top of a branch, which must be readily cut, to avoid excessive development in height of the cutting; or semi-woody cuttings of stem, that is, which comprise a portion of branch which has some nodes. These cuttings are generally 10-15 cm long, some of them can be produced by cutting a single branch from the plant, to be subsequently divided into portions; they are buried for a few centimeters, inserting at least one knot in the root compound, from which the new roots will develop. Before burying the cutting, it is good to remove the leaves in the lower part, for at least a third of the length of the cutting.
Wood cuttings are obtained in autumn or at the end of winter, taking portions of branches from the previous year, therefore not from excessively old branches; cuttings must be 10-15 cm long, or slightly more; it is good to remove a small portion of bark from the lower part of the twig, to encourage rooting; in general the leaves are raised in the lower part of the cutting, the outer half is removed from the remaining leaves. This type of cutting is practiced with tall trees or with some shrubs.
– Root cutting: this type of cutting is worked in late winter, or early spring, taking a portion of the root, including a root apex, and burying it not very deep; this type of cutting is indicated only with some plants, generally it is however a method little used.
– Cactus cutting: this category includes the cuttings obtained from cacti and succulent plants that root very easily, so that this method of propagation is often used in the case of diseased plants, from which the healthy parts are removed, which are rooted in order to obtain new plants, perfect replicas of the mother plant. In general, before laying a cutting of a succulent plant, which can be of leaf, stem, branch, etc., it is good to let it dry for a few hours, so that the cutting surface, being dry, allows a greater probability of rooting.