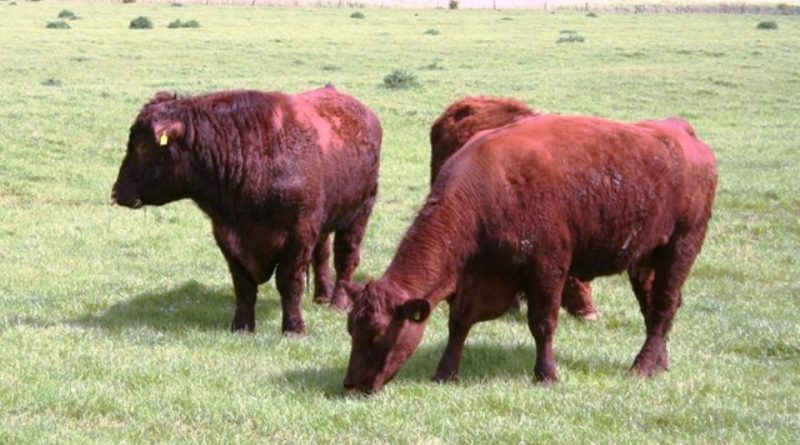 Lincoln Red is a bovine breed (Bos taurus Linnaeus, 1758) originating from Lincolnshire, in eastern England, and now spread in various countries around the world for the production of meat.

Geographical and Area Distribution –
Lincoln Red is a breed that was born in the Lincolnshire region of Great Britain, where it is currently bred, but today widespread in many countries of the world, including Australia, where these cattle were imported over 100 years ago and where the The country’s Lincoln Red Cattle Society was founded in 1971.

Origins and History –
Lincoln Red is an autochthonous beef cattle breed with ancient origins, and whose ancestors were probably brought by the Viking invaders of Great Britain. The geographical origin of this breed is, as mentioned, in the Lincolnshire region of eastern England where the animals were originally selectively bred by the indigenous cattle of the region, crossing Durham Shorthorn to create a dual-purpose breed. Over time it then became a specialized breed for the production of meat, so the leaders of the modern breed are very different from past times.
As for the history of Lincoln Red, after the invasion of the Vikings, who had the merit of having brought the descendants of the Bos genus to eastern England, little is known about the history of Lincolnshire cattle; we must reach the notes present in the book of Gervaise Markham in 1695.
During the late 18th and early 19th centuries a number of Lincolnshire breeders brought Durham and York Shorthorn bulls in cherry red color and medium sized heifers, some from the famous herds of Robert Bakewell and the Collings brothers. These animals were crossed with local cows, large and robust, to improve conformation. The resulting livestock became known as the Lincolnshire Red Shorthorn.
In 1799 the breed was described by the Board of Agriculture as: an unsurpassed and valuable breed of cattle.
In 1822 the first volume of the Coates Herd Book distinguished the two types of Shorthorn. Then, in 1895, the Lincoln Red Shorthorn Association was founded which began to publish, in 1896, its genealogical book.
A few decades passed and already in 1926 the Lincoln Red Shorthorn was the second largest breed of breed cattle in England in terms of records – Shorthorn was the largest. Initially, the breed had a dual purpose, later with selective breeding, it progressively changed to a specialized breed for the production of meat, even if it retained a high milk yield, important for the rapid growth of the offspring.
In 1940 it was still classified as a dual-aptitude breed but in 1980 it was decided to definitively focus on the aptitude for meat production.

Morphology –
Lincoln Red is a breed characterized by an intense cherry red coat, a broad muzzle, good haunches and strong feet.
They are cattle with a withers height ranging between 135 and 150 cm and with a flesh-colored muzzle.
It is also an acorna breed.

Productive attitude –
Lincoln Red, as mentioned, is now a specialized meat production breed.
It is a breed with high food efficiency, which converts the fodder dose very well, and is easily adaptable to regional grazing and climatic conditions.
Due to its morphological characteristics, and their robustness, they are animals that adapt very well in areas with poor pastures and that respond quickly when introduced for finishing indoors.
Furthermore, their docility allows them to be raised in the most varied conditions.