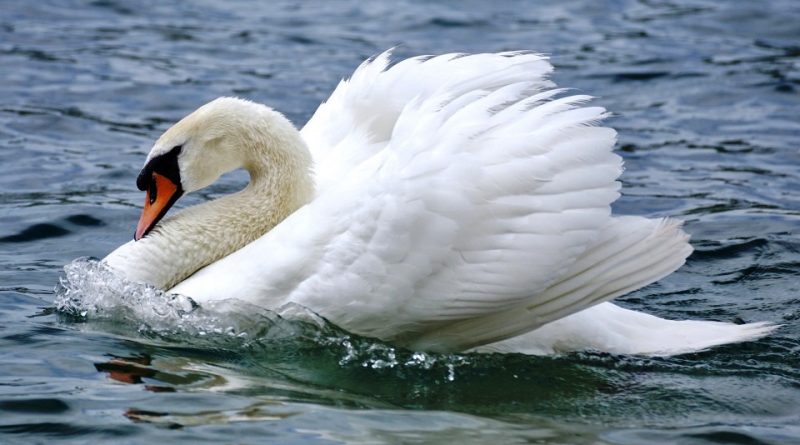 The mute swan or white swan (Cygnus olor (Gmelin, 1789)) is a large bird belonging to the Anatidae family.

Geographical Distribution and Habitat –
The mute swan is a species native to Eurasia but also introduced in North America, Oceania and Southern Africa.
This bird, in the wild, nests in Northern Europe, southern Russia up to Mongolia and Tibet. It is generally a migratory species.
In Italy it is not particularly widespread in the free state.
Its habitat is that of wetlands and areas rich in vegetation, such as reeds; it is also a bird that adapts very well to captivity and is also easily domesticated. 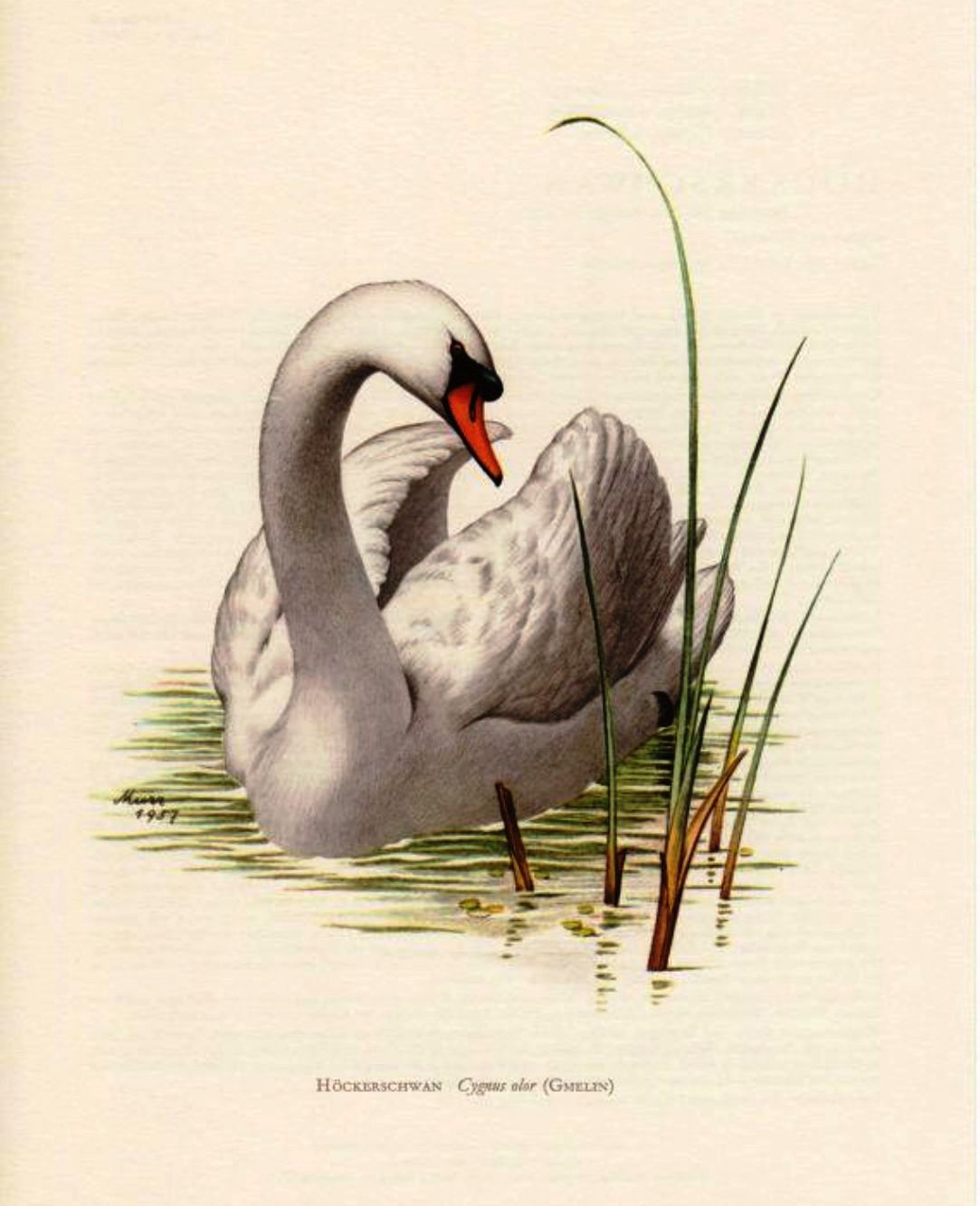 Description –
The mute swan, also known by the names of mute swan or white swan is a bird of considerable size with practically identical males and females, even if the female is slightly smaller.
The male has a wingspan of 240–275 cm and the female of 220–245 cm.
The length is 135-160 cm in the male and 127-150 cm in the female.
The average weight is around 15-20 kg.
It has a prevailing pure white plumage with the head area between the eyes and the black beak, devoid of feathers.
The legs are gray-black; the upper beak for the most part is orange – with the exception of the partially black ends – while the external part of the lower one is mainly black.
At the attachment of the head with the beak it presents on the upper part of the latter a black protuberance, whose development begins a few months after the birth, which is generally of a more pronounced size in the male than in the female (within a couple) , and variable in the maximum size from specimen to specimen.
The young swans have gray plumage and a greenish-gray beak.
The mute swan is also known for the very particular sound produced by the flight, audible even at a great distance in case of flocks.

Biology –
Cygnus olor, like all swans, is a monogamous species (also in captivity) and the mating phase begins with a characteristic exchange of effusions within the couple, as well as the courtship and mating rituals (which take place in water), consisting of movements neck, body and swimming almost identical and synchronized – easily comparable to a dance – in which the swans seem to verify or refine their harmony as a couple; curiously, during the courtship ritual (in which two swans decide whether to become a couple or not), while they each rotate on themselves moving together, the position of the neck and wings can be very similar to that in which they are in the maximum state alert.
Before hatching, a nest is created with the interlocking overlapping of dry branches, rushes and various shrubs, in shallow, calm and substantially stable water, close to or close to the shore (sometimes using immediately adjacent reliefs, from which to access however directly to the water), in inlets between reeds or in other areas with shallow waters, in any case defensible against predatory animals and hostile to them, generally secluded, and immune to normal potential changes in level and water course.
In some cases the nest is built on the mainland adjacent to the undertow, for example in the case of colonies of several couples in protected natural reserves, or where the safety of the place is however implemented by other factors in place of the natural protection constituted by the realization in water ( e.g. protection of man, fences, area accessible only from the shore, etc.).
The nest is of large diameter and is due to the fact that the edges are made with a deliberately slight slope in at least one point, to allow on that side the ascent and descent from the nest of the parents during the hatching – and of the small swans a once born.
After mating, the spawning runs from early spring to end in the period of May – June.
The female lays on average from 5 to 7 eggs which are mainly hatched by her – with the collaboration of the male – for a period of about 34 – 38 days.
The hatching period varies between May and July, depending on when the spawning of all the eggs ended (i.e. based on when the hatching started).
After the birth of the young swans, they remain in the nest for a few days – sometimes a few hours – and are then able to walk and swim quickly.
In this period the couple constantly protects the young, and during the movements the family often moves in a row, generally with the male closing it while the female guides it. In water, children sometimes climb onto their parents’ backs without particular need, which is later useful in potentially hostile underwater predatory waters that could otherwise take advantage of the reduced size of the cygnets to attack them. The protection of the offspring lasts for about 5/6 months.

Ecological role –
The mute swan is a sedentary bird, very tied to its habitat: only populations that live in the northernmost latitudes gather in flocks to go down to winter in the regions where the climate is milder.
When it feels threatened, this bird emits “puffs” at the address of the unwelcome patron, similar to those of cats when they raise their fur in view of a fight, and always similarly to cats contextually tends to retract their wings, increasing visually in size; another sign that the mute swan is in an alarm state comes from its eventual total retraction of the neck by flattening the head up to the hanging with the bust.
Like the other swans, the Mute Swan often swims with one leg – usually when very relaxed – placing the other on the back (on the side of the leg itself) or keeping it folded under the plumage of the wing (always on the same side).
This posture can be maintained even when standing, on dry land or in particularly shallow waters.
Like many birds, and especially aquatic birds such as Anatidae, the mute swan dedicates assiduous care to the cleaning of the plumage, which is very important since – in addition to being a useful function to keep the body free of dirt potentially harmful to health – it includes making water repellent the plumage itself.
To take flight, this bird needs large stretches of water without obstacles around it, where you can take a run almost running on the water and where you can gradually get up in flight.
As far as their nutrition is concerned, the diet is based on minnows, molluscs, seeds and sprouts which it finds in water by immersing its long neck. In captivity it is fed with grains (or specific pelleted feed) with the integration of fresh fruit and vegetables.
For the breeding of swans it is essential to have a pond or a mirror of water of adequate size.
As for its relations with the human species, in the swan he relates to man with prudent diffidence, then easily pushing himself to socialize (accept food, attend shores / beaches with people, etc.).
In some cases, however, it can become aggressive and harm the human being, when he feels in danger, or to protect his fellow human beings (e.g. offspring and partner).
As for its state of conservation, Cygnus olor is a particularly protected wild species pursuant to Law 157/92. It suffers from some rare act of poaching and the destruction of the natural environment.
Among the major threats of this species we remember the aerial pylons (in which cables the swans in flight risk colliding if they are not very evident and / or placed along descent or ascent trajectories required for ditching or to gain altitude), artifacts and devices that alter or unnaturally or force the course and water level (which is particularly dangerous during the hatching period, in which the nest risks being submerged or finding itself dangerously far from the water), fishing activities and residues (lines, baits, hooks and sinkers, in which the swans risk being caught or ingesting in feeding – e.g. residues on the seabed).