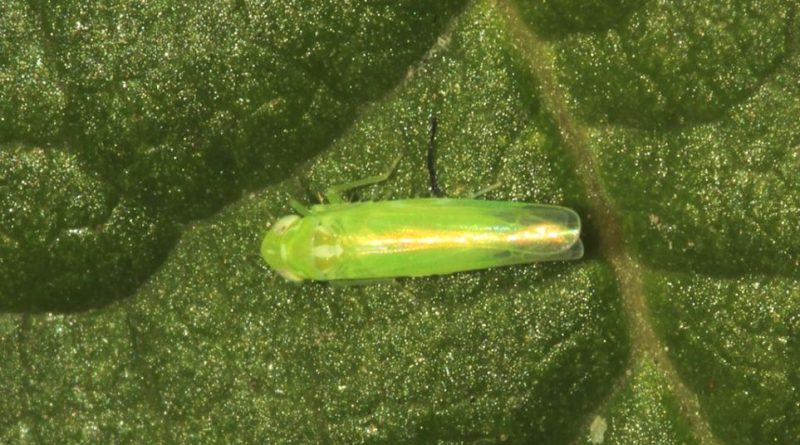 The greenish cicada (Empoasca decipiens Paoli, 1930) is a small insect belonging to the Cicadellidae family.

Geographical Distribution and Habitat –
The greenish cicada is an insect present in most of the European territory, in the eastern Palearctic ecozone, in North Africa, in the Near East and in the Afro-tropical ecozone.
In Italy it is widespread throughout the territory and can be found in the various stages of development on numerous host plants, cultivated and not: beetroot, eggplant, potato, pepper, fava bean, bean, tobacco, alfalfa, elderberry, clematis, spontaneous essences, etc..
At the adult stage it infests numerous arboreal and shrubby plants such as privet, hazel, lonicera, fig, sofora, orange, bramble, maple, poplar, willow and alder.
Sporadic infestations of adults can occur in late summer on vines and citrus fruits.

Aptitude and biological cycle –
Empoasca decipiens spends the winter at the adult stage, in shelters among the vegetation.
This insect on reproduces sexually and the females, once fertilized, will lay their eggs in the tissue or stem of a host plant through their ovipositor. The larvae will hatch after 1-4 days; subsequently the insect undergoes incomplete metamorphosis, which means that the nymphs resemble the adult insect during their five nymphal stages, but do not develop wings until the fourth stage.
Complete development takes 10-37 days depending on the temperature and the host plant on which the insect develops. The optimal temperature for the development of eggs is 24 ° C and the insect shows its preference for development on broad bean plants; the development from egg to adult, during the summer period, is completed in about a month.
Arriving in the spring, the insect begins to feed at the expense of various herbaceous plants, such as Potato, Beetroot, Cotton and some Legumes.
At the end of the summer period, in August-September, it is brought to the citrus fruits where it stings the fruits. This insect completes several generations (up to 4) per year in temperate areas but can reach 10 generations in warmer climates, such as in North Africa.

Ecological role –
The adults and the pre-imaginary forms of Empoasca decipiens infest the leaves of the host plants, through sucking bites on the main and secondary ribs.
However, the preimaginal stages of the insect are the main culprits of the damage: their poor mobility pushes them to concentrate their trophic activity on the same leaf. The second generation individuals, active in the hottest summer period, are particularly dangerous if the host plants are in a state of water stress.
The lesions caused by the insect cause the onset of browning of the ribs, hindering the circulation of the processed lymph, with consequent showering of the peripheral part of the flap towards the lower page; also necrosis of the margin itself occurs, preceded by the yellowing of the tissues (in the white vines) and the redness of the same (red vines). These necrosis can extend to the entire leaf margin or only in limited sectors, sometimes deep into the plant tissues.
The affected leaves dry out and fall prematurely; the younger ones wilt and dry up without showing the chromatic alterations described.
As for the most harmful conditions, these occur with more humid weather and shading of the vegetation that push the insect to push itself on the growing leaves placed in the inner part of the vegetation.
As for the peach, Empoasca decipiens attacks the leaves located at the apex of the shoots causing crumpling, failure to develop the flap and necrosis of the apical part. On actinidia, on the other hand, the suckings cause the necrosis of the leaf edge, with consequent consequences on the development of the fruits.
These alterations are called “yellow spotting”, or “fetola”; the symptoms considerably depreciate the fruit and are more frequent on Mandarin, Clementine, Orange and Lemon.
The interventions aimed at containing this insect must first of all be directed to the elimination of the plants of the herbaceous plants which host, in spring-summer, the Empoasca decipiens before they are transferred to citrus or other fruit.
Chemical control interventions must be carried out only in case of extreme necessity and in any case with a threshold of about 3% of affected fruits; it consists in the execution, at the moment of migration of the phytophages on the citrus fruits; of a hair spray treatment with phosphorganics.
However, consider that if the infestation occurred, almost always, it is because the agricultural production ecosystem was designed with non-agro-ecological criteria (excessive specializations, incorrect fertilizations, too tight sixths, etc.). It should be remembered that in nature this insect, if all these conditions are respected, is controlled by some Hymenoptera.
Once the chemical treatments have started, it is very complex to restore certain natural biocoenoses.