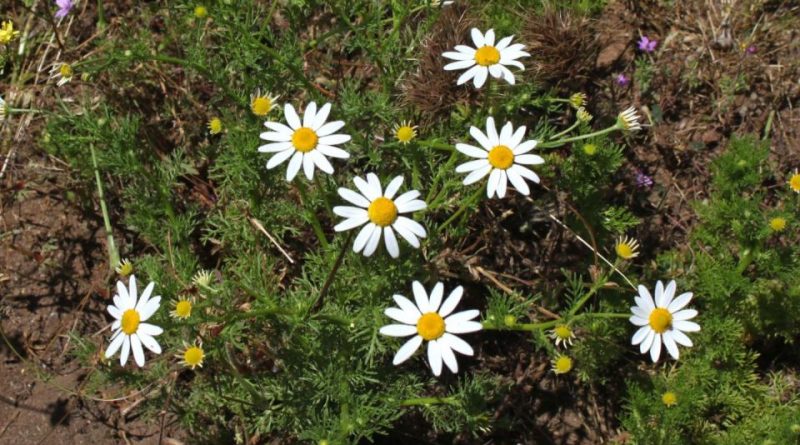 Geographical Distribution and Habitat –
Anthemis cotula is an annual plant of probable Middle Eastern origin, introduced by us since ancient times with the spread of crops (archaeophyte) and today with a Euro-Mediterranean distribution.
In Italy it is present almost everywhere except the Aosta Valley.
Also across the border (always in the Alps) it is present in most of the regions: France (departments of Alpes-Maritimes, Drôme, Isère and Savoy), Switzerland (cantons Bern, Ticino and Grisons), Austria (Salzburg Länder, Carinthia, Styria and Lower Austria) and Slovenia. On other European reliefs it is present in the Black Forest, Jura Massif, Central Massif, Pyrenees, Balkan Mountains and Carpathians.
Outside Europe, fetid chamomile is present in North Africa, in temperate Asia; while it is considered naturalized in North America and Australia.
Its habitat is that of uncultivated, cereal fields, ruderal environments, below the mountain belt, even if its reliefs this plant can be up to 1,300 m. s.l.m. and beyond. 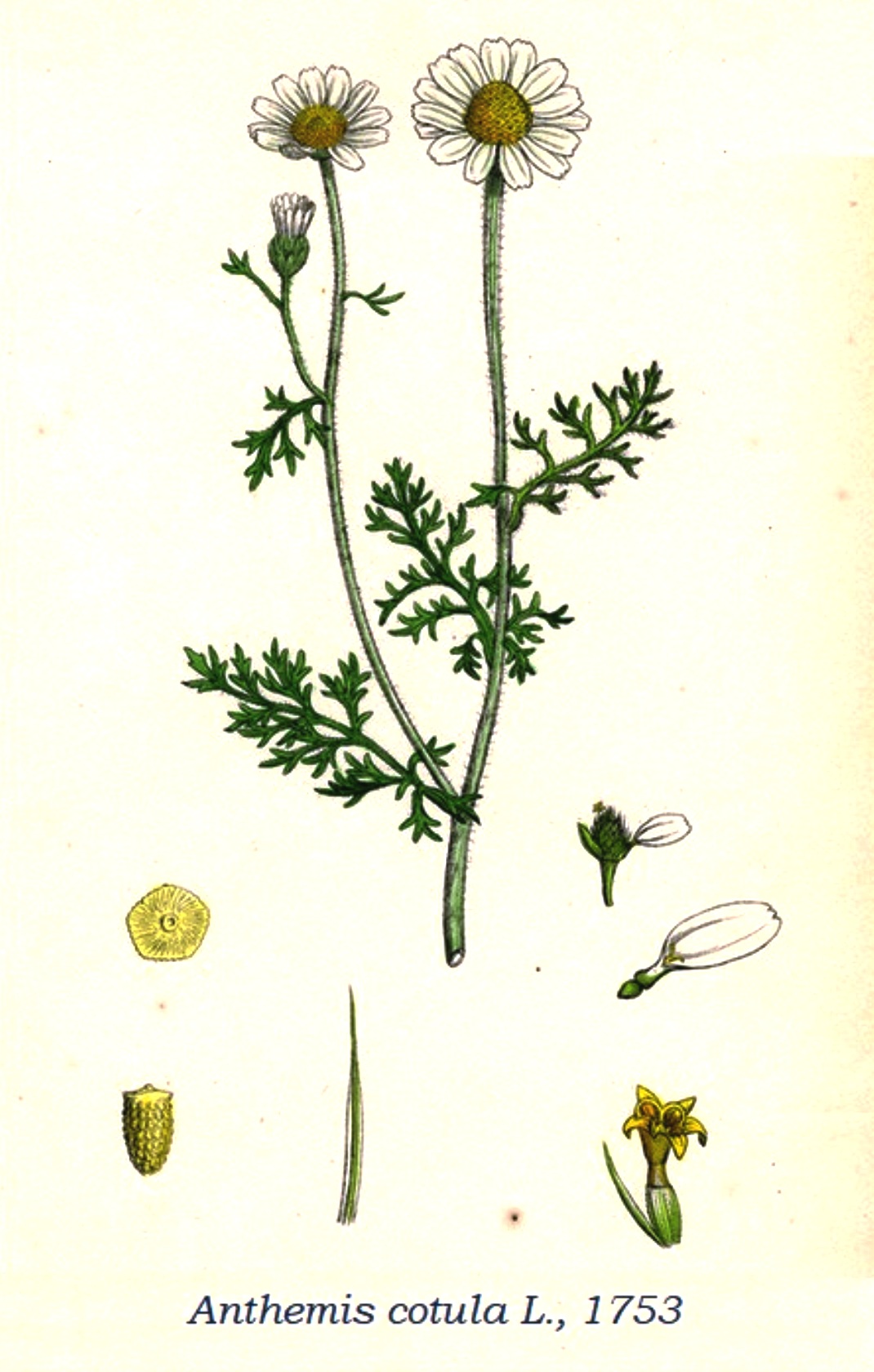 Description –
Stinking Chamomile is a herbaceous plant that grows between 10 and 50 cm, up to a maximum of 90 cm.
It has an erect floral axis, often with few leaves. The whole plant is sub-hairless, partly dotted with glands and with an unpleasant odor.
The epigean part of the stem is branchy-corimbosa, with prostrate or ascending stems and streaked and green surface tending to reddish.
The roots are of the collated type with a fittonante underground part.
The leaves along the caule are alternately arranged. The foil is finely engraved: once or twice pinnate seven. The segments are completely divided and have a form of capillary lacinias. The foil dimensions are 15 – 30 mm wide and 25 – 55 mm long, with lacinias of 0.3 – 0.4 mm wide and 6 – 9 mm long.
The inflorescences are in the form of pedunculated terminal heads collected in corymbs. The peduncles have a vertical bearing, are bare (without leaves – afilli) and do not swell to fruiting. The structure of the flower heads is typical of the Asteraceae.
The flowers are sympathetic, zygomorphic (ligulated ones) and actinomorphic (tubular ones); they are also tetra-cyclic (i.e. formed by 4 verticils: calyx – corolla – androceo – gynaeceum) and pentamers (calyx and corolla formed by 5 elements). They are also hermaphrodites, more precisely the ray flowers (ligulate ones) are feminine and sterile; while those of the central disc (the tubular ones) are bisexual.
The flowering period runs from May / June to September.
The fruit is a slightly compressed achene conical-cylindrical, striated and tuberculate, with a rounded (or elliptical) section with barely noticeable angles and a smooth surface.
Inside the fruits we find angular seeds (one for each fruit). The achenes are without pappus (or surmounted by a short spongy membrane elongated on one side). The color of the fruit is dark reddish. Fruit size: 1.3 – 2 mm.

Cultivation –
Stinking Chamomile is very often widespread on cultivated land, gardens and vineyards, along the edges of paths, walls and is particularly widespread on silty and clayey soils recently worked, humiferous, and rich in nitrogen.
The preferred substrate is both limestone and siliceous with neutral pH, medium nutritional values ​​of the soil which must be dry. In some areas (North America) it is considered a weed.
As far as reproduction is concerned, this occurs by seeds after entomogamous pollination.
The seeds falling on the ground (after being transported for a few meters by the wind thanks to the pappus – anemocora dissemination) are subsequently dispersed mainly by ants-like insects (myrmecoria dissemination).

Uses and Traditions –
Stinking Chamomile, also known as Antemide fetida or Cotula has properties similar to those of the common Chamomile (Matricaria chamomilla L.) but much less effective, moreover it is weakly toxic.
The plant contains a bitter volatile oil which is responsible for the typical unpleasant odor and which can cause photoallergic reactions in sensitive subjects.
According to popular medicine, this plant has the following medicinal properties:
– antispasmodic (reduces muscle spasms, and also relaxes the nervous system);
– astringent (limits the secretion of liquids);
– diaphoretic (facilitates skin transpiration);
– diuretic (facilitates the release of urine);
– emetic (useful in case of poisoning as it causes vomiting);
– emmenagogue (regulates menstrual flow);
– tonic (strengthens the body in general).
Beekeepers rub their hands with this plant to avoid bee stings.
The various parts of the plant if dried are valid for repelling fleas and mice. A dye similar to gold can be obtained from the whole plant.

Method of Preparation –
Anthemis cotula can be used like common chamomile, with the precautions mentioned above about its possible allergic reactions, but it has less effective properties than this.