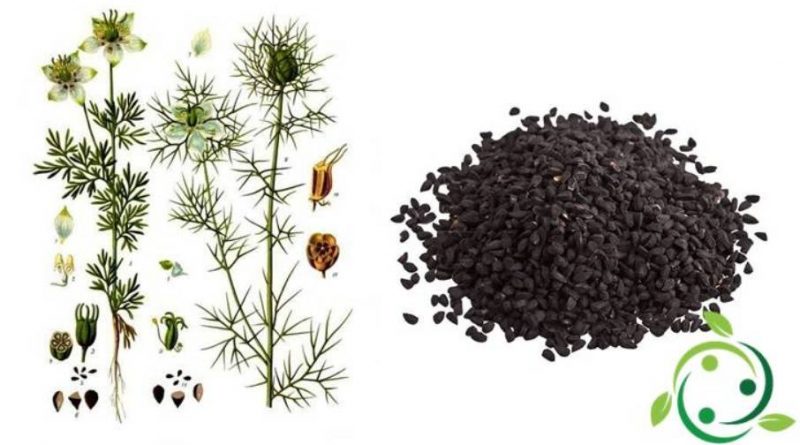 Black cumin is a spice obtained from the seeds of the homonymous plant, also known by the name of Nigella (Nigella sativa L.) which belongs to the Ranunculaceae family.

Origins and History –
This spice, given its great diffusion, is known with many terms, which make it confuse with other spices: black cumin, black seed, fennel flower, nutmeg flower, Roman coriander, black onion seed, black sesame or black wheat . Among the names with which it is known in the various countries we remember. kalonji (hindi), קצח (kazah) (Hebrew), chernushka (Russian), çörek otu (Turkish), حبه البركة (habbatul barakah, literally blessing seeds) (Arabic), سیاهدانه (siyah daneh) (Persian), black wheat (habbe sauda, ​​as it was called in Arab countries in medieval times).
Other names with which it is known are: black seed, fennel flower, nutmeg flower, Roman coriander, black onion seed or black sesame; these names are often misleading and lead to confusing Nigella with other spices. The old English name used to indicate it, Gith, is now used for gittaione (Agrostemma githago).
Furthermore, the term black cumin means Bunium persicum which, in fact, is the real black cumin.
However black cumin, obtained from Nigella, was already known and appreciated in antiquity: a Hittite find dating back to around 1650 BC. revealed remains of honey and nigella seeds.
It was also already appreciated by the ancient Egyptians, as evidenced by the seeds found in various archaeological sites (in the tomb of Pharaoh Tutankhamun there were amphorae full of nigella oil). Although their function in Egyptian culture is unknown, these findings tell us that the seeds and oil of the plant had to play an important role if selected to accompany the pharaoh after life.
The first written in reference to Nigella sativa is found in the book of Isaiah in the Old Testament, where the prophet contrasts the cultivation of nigella and cumin (typical Egyptian crops), enhancing the cultivation of wheat (Isaiah 28: 25, 27).
We know for sure that it was used as a medicine in ancient Greece, for the treatment of intestinal and genital tract disorders.
This leads to the medieval era with Charlemagne who indicated the plant as one of the indispensable ones in the garden. The Arab tradition called “blessed seeds” the fruits of the Nigella following both the indication of the Prophet who advised to always use them since they treated all diseases, except death.
In medieval times, the properties of Nigella were studied by Arab-Islamic researchers, particularly by the scientist al-Biruni and by the philosopher and physiologist Avicenna (Ibn Sina) in the “Canon of Medicine”, who claimed that black wheat seeds had the property of stimulate body energy.

Description –
Nigella which is a plant native to Southwest Asia is a herbaceous species that grows up to 20-30 centimeters in height. It has branched and linear (but not filiform) leaves. The flowers are delicate, and usually pale white and blue in color, with 5-10 petals. The fruits are large and swollen capsules composed of 3-7 follicle units, each containing numerous seeds, which represent the real spices.

Active principles –
Nigella Sativa is a plant particularly rich in nutritional principles, in fact it contains eight of the nine essential amino acids (that is, that we are unable to synthesize in sufficient quantities and we must introduce through the diet to keep the body in good health) and over a hundred precious elements including arginine, ascorbic acid, glutamic acid, calcium, carbohydrates, carotene, cysteine, iron, lysine, magnesium, minerals, potassium, proteins, selenium, vitamins A-B1-B2-C, zinc.
It also contains many essential fatty acids (EFA-Essential Fatty Acids) – including linoleic acid and linolenic acid – which, like vitamins and minerals, are important for hormone production.
The properties of black cumin derive mainly from its carvone content (in the volatile part of the oil contained in the seeds).

Properties and Uses –
The seeds of the Nigella Sativa plant have been appreciated for their healing properties since time immemorial. The first news on its cultivation even comes from ancient Egypt.
Recent scientific studies confirm the therapeutic value attributed to the plant, it is even recognized as the “regulator of the immune system”, useful for fighting degenerative diseases.
In Middle Eastern cuisine, after fast toasting that enhances its bitter and pungent flavor (vaguely reminiscent of oregano), nigella is used in recipes for traditional desserts or biscuits, to flavor and cover particular types of bread, or as a decoration in salads. .
What the ancient tradition had learned through the experience and daily use of this remedy has today been confirmed by scientific literature. Since the 1960s, in fact, hundreds of studies have focused on analyzing the health benefits of taking black cumin.
The black cumin for its particular richness in various active ingredients boasts several properties including:
– Anti-inflammatory: it is able to fight inflammations present inside the body;
– Analgesic: acts on pain helping to relieve it;
– Antibacterial, antiviral and antifungal: counteracts infections due to the presence of viruses, bacteria or fungi;
– Antioxidant: counteracts the free radicals responsible for cellular aging;
– Immunostimulant: the seeds of this plant strengthen the defenses of our organism;
– Bronchodilator: acts positively on the respiratory tract by promoting the passage of air;
– Keeps blood sugar and high blood pressure at bay: the active ingredients present in black cumin seeds act positively against blood sugar levels and blood pressure regulation.
According to what has been discovered by some research, several health problems can potentially be treated with this plant:
– Type 2 diabetes: two grams of black cumin per day reduced fasting glucose, decreased insulin resistance, increased beta cell functionality and reduced glycosylated hemoglobin (HbA1c) in human subjects;
– Helicobacter Pylori infection: black seeds have the ability to fight infection due to the presence of this bacterium;
– Epilepsy: black cumin seeds were traditionally known to have anticonvulsant properties. A 2007 study on epileptic children, whose condition was refractory to conventional drug treatment, found that an extract of Nigella Sativa significantly reduced seizure activity;
– High blood pressure: the daily use of 100-200 mg of black seed extract, twice a day for 2 months, has been shown to have a positive effect on patients with mild hypertension;
– Asthma: Thymusone, one of the main active ingredients of Nigella sativa has anti-asthmatic qualities. A study found that a black cumin seed liquid extract has a fairly potent effect on the airways;
– Acute tonsil-pharyngitis: against this inflammation, often of viral origin, black cumin seeds (in combination with Phyllanthus, Phyllanthus niruri) have proven effective in significantly alleviating pain in the throat;
Colon cancer: cell studies have found that black seed extract can help stop the growth of colon cancer, even the oil extracted from this plant has significant inhibitory effects against this type of cancer without side effects. observable;
– Methicillin resistant Staphylococcus aureus infection: black cumin seeds have antibacterial activity against this microorganism which has become resistant to methicillin (antibiotic).
In Eastern folk medicine and Ayurveda, black cumin seeds are frequently used in the treatment of respiratory diseases, digestive problems, cardiovascular diseases, kidney and liver problems, dermatological disorders but also to support the immune system and promote the well-being of the body. If you intend to use these seeds for healing purposes, contact an expert who will advise you best.
But beware of some contraindications on the use of black cumin seeds.
Their intake is not recommended in pregnancy. There is in fact the possibility that the active ingredients present in this plant lead to the appearance of premature contractions.

Preparations –
As mentioned, the seeds of black cumin are widely used in the kitchens of various countries around the world. Recall that it has a bitter and pungent taste with a faint strawberry smell. It is mainly used for the preparation of liqueurs, candies and sweets in general. In Middle Eastern cuisine it finds its place in the recipes of typical sweets and traditional biscuits; often it is also used to flavor and cover particular types of bread (the variety of naan bread called Peshawari naan), or as a decoration in salads. Nigella oil is used in the United States as a dietary supplement and can also be safely eaten on bread. It is the main ingredient of a cola-flavored drink: Summon Cola
In general, Nigella seeds can be used in the kitchen, for example by spreading them on your favorite dishes, just a teaspoon is enough to put them in salads, soups, grilled vegetables or where you like them more.
At the pharmaceutical and therapeutic level, the easiest way to take advantage of the properties of black cumin seeds is to prepare an herbal tea simply by pouring hot water over a spoonful of seeds and leaving them to infuse for about 10 minutes. Once the time has elapsed, it is necessary to filter before drinking.
As for black cumin seed oil, this is often used to treat skin problems such as dermatitis, urticaria, eczema, acne but also for herpes and allergies. In this case, it is used externally using a small dose of product 2 or 3 times a day, massaging gently until completely absorbed on the area to be treated.
However, this oil can also be taken internally. The generally recommended dose is 1 teaspoon 3 times a day for a few weeks. It can be used to treat the various aforementioned ailments, there are those who use it successfully in case of Candida or to strengthen the immune system.