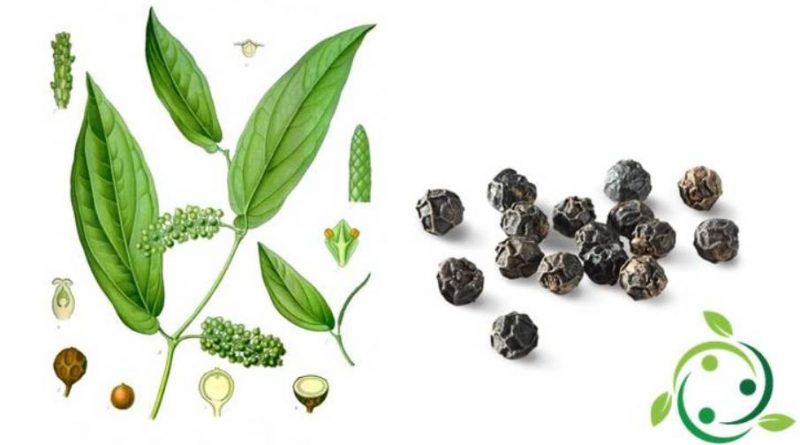 Cubeb or Java pepper is a spice obtained from the fruits of Piper cubeba (Piper cubeba L.), a plant common in the Java and Sumatra areas.

Origins and History –
Pepe cubeb is a spice that comes from Indonesia, still used in some dishes of the archipelago and that was already imported into Europe around the 1500s and 1600s, although it was less liked than traditional pepper, for its taste it is acrid and pungent. Over time it has lost more and more importance for which today, in Europe, it is an unknown emeritus.
In the fourth century BC, Theophrastus mentions a spice, komakon, used together with cinnamon as an ingredient in aromatic blends. Guillaume Budé and Claudius Salmasius have identified this komakon with the cubeb, given the resemblance that the word has with the Javanese name of the cubeb: kumukus; this would also provide us with evidence, if not of direct trade between Greece and Java, at least of the spread of Javanese products also in the Mediterranean basin.
In the Middle Ages, this spice arrived in Europe from India through trade with the Arabs; it became one of the most used and widespread spices. The name cubeb comes from the Arabic kabāba (كبابة) which is, perhaps, a transliteration of the ancient French word quibibes. In the book The Thousand and One Nights (which should be from the tenth century) the cubeb is named as a remedy for infertility, which would demonstrate its use in Arab medicine.
In the thirteenth century Marco Polo describes Java as the largest producer of Cubeb.
In the 14th century, cubeb was imported to Europe from the grain coast, under the pseudonym of pepper, by the traders of Rouen and Lippe. John Parkinson, in his Theatrum Botanicum, states that around 1640 the king of Portugal would have prohibited the sale of cubeb to promote black pepper; following this, its use in Europe would decline until it almost disappeared. It would return to the limelight in the nineteenth century as a medicinal plant.
Today it continues to be used as a flavoring for gin and cigarettes in the west and as a condiment for food in Indonesia and Africa.

Description –
The spice of the Cubeb is obtained from the fruits of the Piper cubeba which is a climbing plant that can reach 6 meters, with oval and elongated leaves, leathery and dark green in color. The flowers are sessile and gathered in inflorescences.
The fruit is a drupe, similar to the black pepper drupes but remains attached to it, even when dried, the peduncle with which it was joined to the plant. The pericarp of the dried fruit is wrinkled, the inner seed is white and oily (it contains numerous essential oils).
It is similar to black pepper, from which it stands out for its straight “pigtail” and its gray-brown color. These fruits are then dried to be used as spices and from which essential oils are obtained.

Active principles –
Cubeb contains some important active ingredients and essential oils.
There are Cubebine (C10H10O3), a crystalline substance discovered by Eugène Soubeiran in 1839, Camphor of cubeb or cubebene (C15H24) and cubebic acid.
There are sesquiterpenes, such as: caryophyllene, copaene, α- and β-cubebene, δ-cadinene and germacrene and some monoterpenes, such as sabinene 50%, α-thujene and hulls, in addition to rubber, fatty substances.

Properties and Uses –
Cubeb has a pleasant and aromatic smell and a taste associated with allspice but with more bitter notes.
It has a pungent, camphoric, aromatic, pleasant smell, vaguely reminiscent of allspice; but with more bitter notes, citrus. The flavor is peppery, aromatic and slightly bitter, with notes of allspice and nutmeg. Intensity scale: 3.
Since it was widespread in the Middle Ages, many recipes date back to that period. It is used in meat recipes or sauces. It can also be candied with sugar or tamarind glaze. In Moroccan cuisine it is often used in pastry; it may also occasionally appear on the list of ingredients for ras el hanout. In Indonesian cuisine it can be an ingredient in masala. In Poland it is used for Ocet Kubebowy, a typical condiment made up of vinegar, cubeb, cumin and garlic.
Other uses include therapeutic ones; until not many years ago cigarettes were packaged and frequently used for the treatment of asthma, chronic pharyngitis and allergic rhinitis. Cubeb oil has been included in the list of cigarette additives published by the Tobacco Prevention and Control Sector of the North Carolina Department of Health.
The fruits of the cubeb have diuretic, balsamic and antiseptic properties of the urinary tract. They are used as natural remedies in case of asthma, pharyngitis, meteorism and intestinal fermentations, diarrhea, sexual impotence.
Furthermore, cubeb is often used in cosmetics to adulterate patchouli essential oil. Several well-known cosmetic companies use cubeb in their anti-wrinkle products.
In the United States advocates of the legalization of marijuana often claim that the dangerousness of a joint is equal to that of a cubeb cigarette.
The main cubeb producing countries are the islands of Java, Sumatra and the Malaysian archipelago, where the plants grow spontaneously, as well as in the Antilles and in some parts of Africa (Sierra Leone and Congo).

Preparations –
Cubeb is a spice which we recommend purchasing the necessary quantities as it easily loses its aroma.
In any case, the best conservation of cubeb pepper is obtained in a cool, well-ventilated, dimly lit environment and in the absence of humidity.
It is recommended to grind it before use, as is done with pepper, to have the maximum flavor possible.
The cubeb goes well with meats, vegetables and cheeses. It is recommended in dough for savory biscuits and for those who love light but aromatic pepper. Its pleasant and rather acrid smell, the resinous, balsamic and fresh scent reminiscent of juniper and myrtle makes it suitable for game. Sometimes it is added to the composition of the mixture Four spices to flavor pate, sausages, spiced bread. In Poland it is used for the Ocet Kubebowy, a typical condiment consisting of vinegar, cubeb, cumin and garlic.
A pinch should be tried in a glass of Prosecco, and the result is delicious.
It is also very suitable for flavoring bitter chocolate desserts and chocolate truffles. Much used in Asian cuisine. in particular, in Indonesian cuisine, it is an ingredient of various masalas, while in China it enters the composition of curries, not vegetables, together with other spices, for example in curry chicken. In Moroccan and Tunisian cuisine it is often used in confectionery, moreover it is sometimes included among the ingredients of the mixture of spices ras el hanout. In Morocco it is often used in confectionery, sometimes candied with sugar or tamarind glaze.