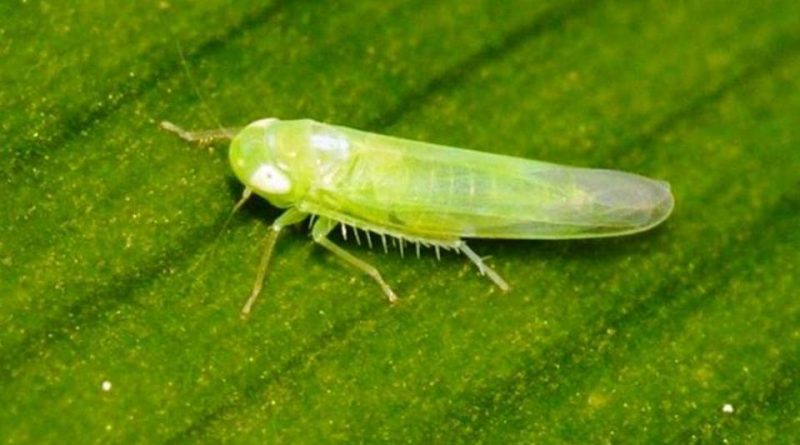 The green buzzer (Asymmetrasca decedens Paoli) is a small insect belonging to the Cicadellidae family.

Geographical Distribution and Habitat –
The green buzzer is an insect widespread in the Mediterranean area, with presence in Asia on the Indian continent, and present in Italy especially in the southern regions, but it can also be found in Liguria, Veneto, Tuscany and Emilia Romagna.
This insect is a polyphagous that lives on different tree plants (citrus, almond, peach, plum, vine, Salix purpurea, etc.), on herbaceous plants (strawberry, bean, eggplant, beet, tomato, potato, pepper, pumpkin, cotton and castor) and spontaneous essences.

Morphology –
The Asymmetrasca decedens, in the adult stage reaches 3-3.5 mm in length; it is recognized for its light green color with green elytra and distal part of the transparent chorus.
The male is characterized by a brown-ferruginous penis, curved dorsally, the apex of which tapers and extends, before the orifice, with a showy process bent at an angle.

Aptitude and biological cycle –
The green buzzer spends the winter at the adult stage in shelters on evergreen, herbaceous and arboreal plants, cultivated and spontaneous, with a greater preference for plants such as viburnum, piracanta and privet.
In the spring, however, it lives preferably on herbaceous plants, including: Potato, Beetroot, Cotton and some Legumes on which it makes the first generation. At the beginning of summer it migrates on peach trees and from August it colonizes the strawberry orchards and in autumn it begins to infest citrus crops. The females lay their eggs in isolation, in the tissues of the leaf veins.
The development from egg to adult, during the summer period, is completed in about a month.
The bites of nutrition are localized instead at the level of the ribs.
This insect, in one year, completes 4-5 generations whose different stages of development can also overlap.
The juvenile stages and the adult forms of the insect usually colonize the lower page of the leaves, sucking the sap directly from the ribs by means of sucking stings.

Ecological role –
The damage resulting from the biological activity of this insect occurs on the fruit and is caused by trophic stings; on the epicarp of the fruits there are yellow spots, or rust, as a result of the escape of essential oils. These alterations, which are more frequent on Mandarin, Clementine, Orange and Lemon, are called “yellow spotting”, or “fetola” and the symptoms considerably depreciate the fruit.
On peach trees sucking stings cause crumpling and curling on younger leaves; these then turn yellow, dry out at the apex or at the edges of the flap. This causes slowdowns in the development of the shoots, the shortening of the internodes and the emission of adventitious vegetation.
The damages are particularly evident in the young plants due to the delayed entry into production.
In peach orchards in full production there is a slow growth of the fruits (on the varieties that ripen in the period of greatest activity of the buzzer). Negative effects are also noted on the production of the following year due to the fruit branches that develop irregularly. In addition, the emission of adventitious vegetation interferes with the regular nutrition of flower buds.
On the strawberry plantations, the damage caused by Asymmetrasca decedens becomes evident in the period of August-September, borne by the young vegetation, with leaf curling and sensitive slowdowns in the growth of plants with heavy repercussions on production.
The fight against this buzzer must be thought of in a preventive way and essentially consists in the elimination, from the citrus groves and their surroundings, of the herbaceous plants that host, in the spring-summer period, the Buzzers but in the maintenance of a high herbaceous, shrubby biodiversity and arborea avoiding that their elimination pushes the buzzers to migrate on the cultivated plants.
It is above all the high production specializations, the excessively high sixths and the use of pesticides that destabilize biocoenoses to alter the populations of insects and to favor their own which are phytophages of agricultural crops.
If you have to intervene with the chemical defense this must be done only in case of need or with a threshold of about 3% of affected fruits. It consists in the execution, at the moment of the migration of phytophages on citrus fruits; of a hair spray treatment with phosphorganics. In certain situations, a second treatment may be necessary. The chitin inhibitor is also active.
Remember, however, that in nature this buzzer is controlled by some Hymenoptera, for which an analysis of the presence of these is necessary, carried out by an Agronomist and Forestry Doctor who, with a specific analysis, establishes its presence and the time of intervention.