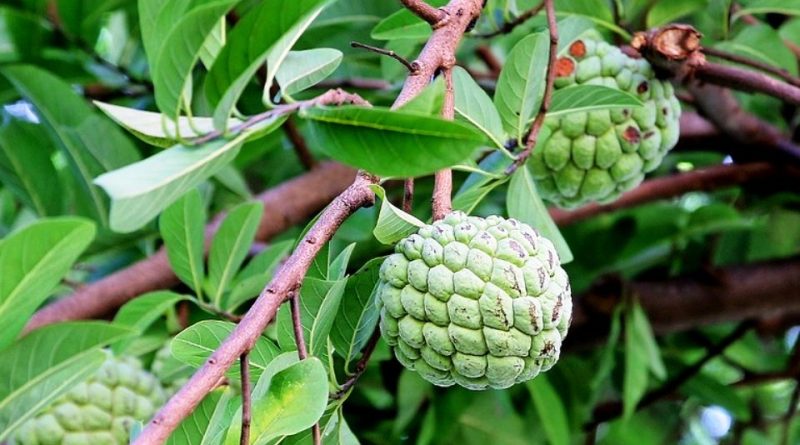 Sugar-apple (Annona squamosa L.) is an arboreal species belonging to the Annonaceae family.

Etymology –
The term Annona the Latinized form of the vernacular name attributed to this plant by the Taino Indians of America.
The specific scaly epithet derives from squáma, squama, flake, due to the presence of scales on the fruit.

Geographical Distribution and Habitat –
Sugar-apple is a plant native to an area between the tropical Americas and the West Indies, although its exact origin is unknown.
This plant was introduced in southern Asia before 1590. The species has naturalized in the United States, in the area up to northern southern Florida in the south as in the State of Bahia, in northeastern Brazil, Bangladesh, and is also , an invasive species in some areas.
It is currently the most cultivated species of Annona, especially in all the tropics and the hottest subtropical areas, such as Indonesia, Thailand and Taiwan.
Its natural habitat is that of tropical or subtropical climates with summer temperatures from 25 to 41 ° C and average winter temperatures above 15 ° C, where it grows from sea level to around 2,000 meters. 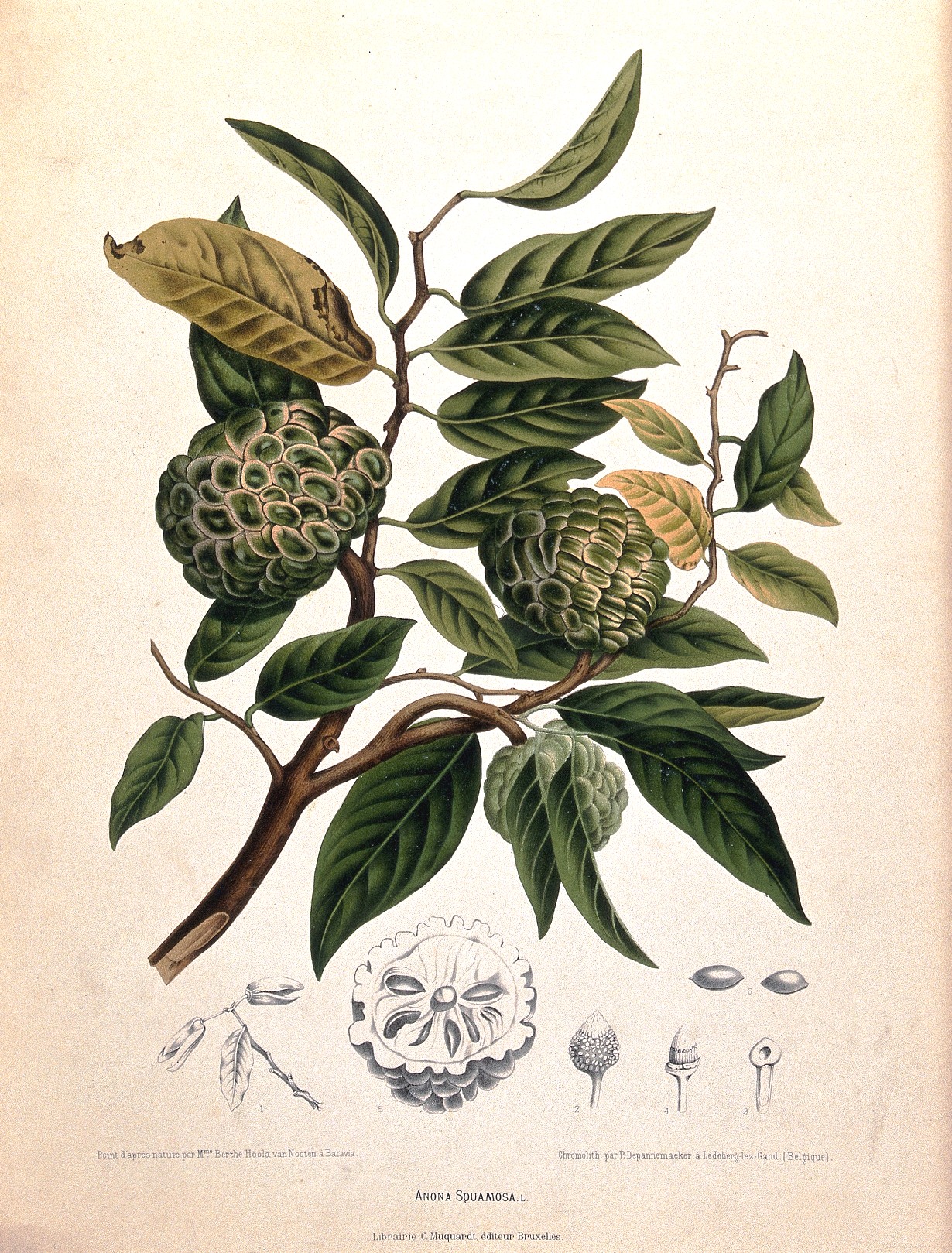 Description –
Annona squamosa is a small, well-branched tree or shrub.
The branches have a light brown bark and visible leaf scars. The inner bark is light yellow and slightly bitter. The twigs turn brown with light brown points, called lenticels from which the underlying tissues can protrude or emit the roots.
The leaves, carried by petioles that are 0.4 to 2.2 centimeters long, green and poorly pubescent, are thin, simple and alternating, single, with a length of 5 to 17 centimeters and a width of 2 to 6 centimeters, rounded at the base and pointed; they are pale green on both surfaces and mostly hairless, with fine hairs on the underside when young; they also have margins which are sometimes slightly unequal and toothless, apparently hairy when young.
The flowers are present alone or in small lateral groups of 2–4; they are about 2,5 cm long, greenish-yellow on a hairy and slender stem, 2 cm long. They have three green, purplish, oblong outer petals, 1.6 to 2.5 and 0.6 to 0.75 centimeters, and three tiny or absent inner petals. The stamens are very numerous and densely present, white in color, less than 1.6 cm long with a light green ovary. The pistils are white, crammed on the upper axis. Each pistil forms a separate tubercle (small rounded warty protuberance).
The antesis occurs between the spring and the beginning of summer and the pollination is entomophagous by means of nitidulid beetles.
After pollination, heart-shaped fruits of greenish yellow color are formed from multiple pistils, when ripe and pendulous, carried by a thickened stem, and has a diameter ranging from 5 to 10 cm, with many round protuberances covered from a dusty branch.
Inside the fruits there is a white color with yellow reflections, edible and sweetly aromatic.

Cultivation –
Annona squamosa is a plant that tolerates the tropical climate of the plains better, both of Annona reticulata and Annona cherimola.
In order to be able to vegetate at its best, it requires summer temperatures between 25 and 41 ° C and average winter temperatures above 15 ° C.
This sapling is sensitive to cold and frost and defoliates below 10 ° C and dies at temperatures a few degrees below zero. It is a moderately drought tolerant plant, it requires at least 700 mm. annual rainfall and does not bear fruit well during drought.
Annona squamosa is a rather prolific plant that bears fruit in less than two or three years. A five year old tree can produce up to 50 fruits; in any case, production is subordinated to the presence of pollinators, however, manual pollination with a natural fiber brush is effective for increasing the yield. Natural pollinators include beetles from the Nitidulidae, Staphylinidae, Chrysomelidae, Curculionidae and Scarabeidae families.

Uses and Traditions –
Sugar-apple, as well as for food purposes, is a plant known for some time in traditional Indian, Thai and American medicine, where the leaves are used, in the form of a decoction, to treat dysentery and urinary tract infection.
In traditional Indian medicine, they are also shredded and applied to wounds. In Mexico, the leaves are rubbed on the floors and placed in the chicken coops to repel lice.
Both the leaves, the shoots, the bark and the roots have medicinal properties; they are all strongly astringent and used to treat diarrhea and dysentery. Green fruits, seeds and leaves have effective vermicidal properties. Young shoots, combined with peppermint, are used in the West Indies to relieve colds and chills.
In Cuba, the leaves are used to lower blood uric acid levels.
The unripe fruit is astringent, while the root is a drastic purgative.
The bark and leaves, combined with those of Annona muricata, are used in a sedative infusion.
An infusion of leaves and fruits is used to aid digestion and cure rheumatism.
From this plant, an oil is obtained from the leaves by distillation, which is applied to the head for the treatment of insomnia.
The powdered seeds are an excellent dewormer and the plant extracts have shown anti-tumor activity.
Among other uses, fibrous bark has sometimes been used locally to produce cordage.
In addition, the light yellow sapwood and brownish heartwood are soft, light and weak so trees are a good source of firewood.
In this plant there are some active ingredients including aisine, which is a diterpenoid alkaloid which is the most abundant alkaloid in the root.
Other components present in the plant include the alkaloids oxofoebina, reticulin, isocoridina, methylcoridaldina the flavonoid quercetin-3-O-glucoside.
Bayer has patented the extraction process of some acetogenins as biopesticide. Other acetogenins have been isolated from seeds, bark and leaves.
Among the various aspects related to this plant, its particular ecological role is recalled. In the Philippines, the fruit is commonly eaten by the Kabog, a bat that then spreads the seeds from one island to another.
It is also a host plant for the larvae of the Graphium agamemnon butterfly.

Method of Preparation –
The Annona squamosa fruit has a whitish and sweet pulp and is common in tropical markets, where they are consumed as dessert fruit.
They can also be used to prepare sorbets, ice creams, jellies, etc.