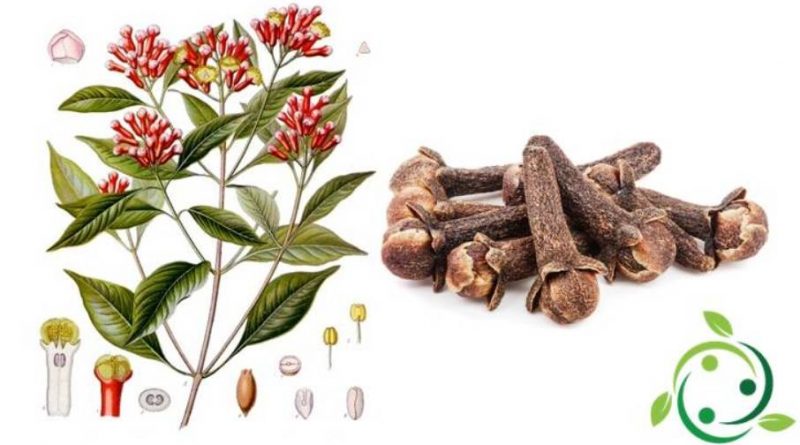 Origins and History –
The cloves are obtained, as mentioned, from the dried closed buds of Eugenia caryophyllata “, a tree originating in the Moluccas (Indonesia), but today cultivated in many tropical areas: the Antilles, East Africa, China and Zanzibar, a small island in the the Indian ocean, which is the world’s largest producer of this spice.
The pharmacological and aromatic properties of this plant have been known since ancient times in China but were long ignored by the Greeks and Latins.
It seems that the Arabs were in the fourth century. to introduce this spice to the West, enhancing its value and mythological origin.
It dates back to the 6th century. the first archaeological evidence, found in Alsace (FR), in a tomb containing a small gold box that contained two cloves. The myth of this plant grew with time, and in the Middle Ages a handful of nails was worth half an ox or a ram.
A testimony of this plant is found in the XXIX canto of the Inferno where Dante testifies its preciousness, condemning the wasting behavior of a rich Sienese of the thirteenth century: “… and Niccolò that the rich costume of the carnation was first discovered in the garden where this seed ‘appicca; and between ‘the brigade in which he dispersed … “.
In the Middle Ages some type of clove was used, called “gariofili”, also for therapeutic purposes. The Salerno Medical School rated them as a real panacea, effective for fighting mental fatigue or memory loss. It was even believed that oranges in which cloves had been stuck protected from the plague, and for this purpose in Naples tablets were prepared with this spice.
However, it is necessary to arrive in the sixteenth century for this spice with a pleasant aroma to become one of the most sought after and dearest products, and doctors advised to infuse it in milk because it would “admirably increase the strength of Venus”. Nails were considered so powerful as aphrodisiacs that their use was forbidden to members of various monastic orders.
In 1500 cloves began to be imported directly from Europeans, thanks to the Portuguese returning from East Timor and the Dutch, who discovered an excellent source on the island of Zanzibar and in the Maldives: as already for Cinnamon, they became the main importers of one of the most loved and dearest spices. The Dutch and Belgians subsequently obtained the essential oil which became a much loved component of cosmetics, which flourished in the two countries thanks to this.
Medical treatments of the nineteenth century continued to consider cloves valid for treating impotence, and an excellent anesthetic remedy to be introduced inside a sore tooth or on top of a sore wound.

Description –
Syzygium aromaticum, from which cloves are obtained, is a plant that loves the humid climate and the sea air. The flowers, still collected in bud, dried take on a brown red color, becoming similar in appearance to nails.
The flower buds so collected and dried make up the spice called cloves. Despite the name, they have nothing to do with the carnation plant: the combination between the two simply derives from the carnation-like shape that the buds take when dried.
A single clove is therefore formed by the long gamosepal calyx formed by 4 sepals and 4 still closed petals that form the central round part.

Active principles –
The composition of the cloves is characterized by the predominance of a propenylphenol: the eugenol which represents up to 80% of the essential oil and it is precisely this component that gives the spice the particular aromas and fragrances that have made it the protagonist not only of kitchens but also of balsamic perfumes and oils.
Eugenol also has antiseptic and anesthetic powers. In cloves there are also discrete quantities of beta caryophyllene, a natural anti-inflammatory.
On average 100 g of cloves contain 274 kcal, as well as: Proteins 5.97 g, Carbohydrates 65.53 g, Sugars 2.38 g, Fats 13 g, Cholesterol 0 mg, Dietary fiber 33.9 g, Sodium 277 mg.

Properties and Uses –
The main areas of cultivation of Cloves are: Zanzibar, Indonesia and Madagascar.
Cloves have local anesthetic and analgesic properties, which is why they were used in the past as a natural remedy for toothache and are still present in the composition of many oral disinfectants.
They stimulate blood circulation, help overcome exhaustion, headaches and memory loss, they are digestive and invigorating. Furthermore, it would seem that cloves are among the foods with aphrodisiac properties.
Another virtue of this precious spice is that of being a powerful natural antioxidant: it fights the action of free radicals while keeping the body young.
This spice has one of the highest antioxidant power (ORAC), an index of value 314.446, about 80 times more powerful than an apple. Cloves have a strong, sweet and flowery scent, with a hint of peppery and “warm”. The compound most responsible for this aroma is eugenol. The taste of cloves can remember carcadè infusions. They present themselves with the characteristic nail shape that gave it its name. They are purchased whole in jars, and used for infusion.
In food use they are used in both sweet and savory. Among the best known dishes are some fruit desserts, especially apples, pandolci and gingerbreads, biscuits, creams and fillings, liqueurs and flavored wines; in Northern Italy mulled wine is very well known. In the savory they accompany game marinades, roasts, broths (especially chicken or chicken) and sometimes seasoned cheeses. They go well with some sweet vegetables, such as onions, spring onions, carrots that are often stored in preserves with the accompaniment of a couple of cloves. They are frequently used to flavor tea or some infusions.
Outside the kitchen they find ample space as already mentioned in cosmetics, and in objects, as potpourri and natural air freshener.
Cloves inserted into an orange are used as a natural alternative to camphor and other moth chemicals, for wardrobe clothes.
Cloves placed in half a lemon are used as a natural alternative to chemicals against mosquitoes in bedrooms. It works until the lemon is fresh, then it must be replaced.

Preparations –
Today this spice, with a penetrating aroma and a pungent bitter taste, enters almost all blends, from garam masala to baharat. It is also widely used to improve the preservation of marinated meats, as well as to flavor stews and stews.
In the United States, cloves perfume and decorate the baked pork leg. In Europe they are an ingredient in spice bread, mulled wine, fruit preserves, liqueurs and drinks.
In the kitchen, however, they are used both in sweet and savory recipes.
They are used to flavor sweets, cooked fruit, gingerbreads, biscuits, creams, liqueurs and flavored wines (for example mulled wine).
Cloves accompany meat very well: they are added to soups or soups with meat, they are used in stews, with game and to enrich barbecue sauces. They season aged cheeses, some sweet vegetables such as onions and carrots and pickled vegetables.
Tea and infusions are often flavored with this. Cloves are very aromatic: to give a dish a spicy tone without covering its flavor, just one will suffice. The particular aroma of cloves, so intense and pungent and slightly fruity, has made them an ingredient of many perfumes and their essential oil is widely used in the cosmetic industry.
In Indonesia they are used to produce aromatic cigarettes, with a very particular flavor.
Putting a handful of cloves in a small bag in the closet (if you want you can add a little cinnamon) is useful to keep moths away, as well as putting them in a bowl in the pantry will keep the food butterflies away.