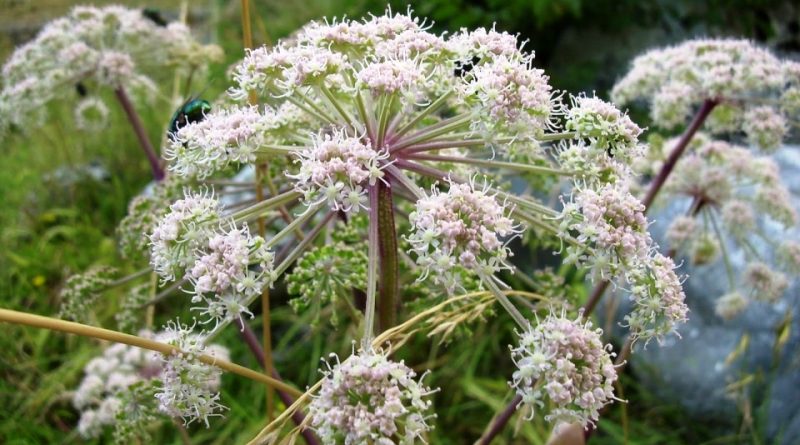 Etymology –
The term Angelica of the genus comes from the medieval Latin herba angelica, since the plant was believed to protect from the devil and cure all diseases; the legend also tells that the healing properties of this plant had been revealed to a monk by an angel.
The specific epithet sylvestris comes from sylva selva, wood (Latin form less correct for silva): plants that grow in the woods, in wild places.

Geographical Distribution and Habitat –
Wild Angelica is a plant in the cold and temperate-cold areas of Eurasia where it is widespread in humid and poorly sunny places, in Europe, Asia Minor, Siberia and Canada.
In Italy it is present and common throughout the territory, with the possible exception of Puglia and Sardinia, where its presence has not been confirmed.
Its habitat is that of wet woods, rocky gorges, banks of streams, where it grows up to 1600 m. 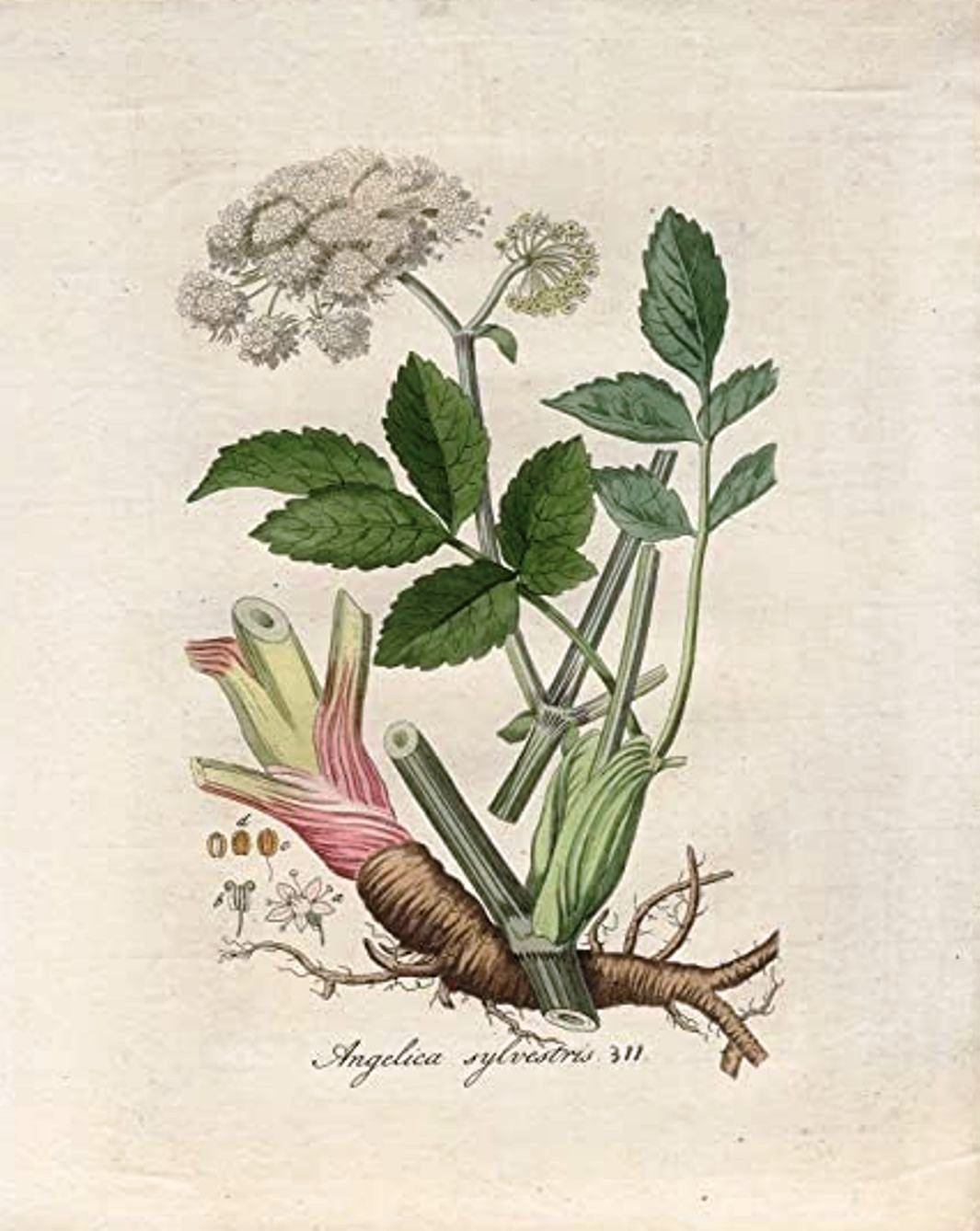 Description –
Angelica sylvestris is a perennial herb species with an aromatic smell and an acrid-spicy flavor.
It has a fleshy root from which a robust stem that can reach a height of 2 m starts.
The stem is cylindrical, branchy, striped, suffused with violet, finely pubescent in the floral scape; presents nodal sheaths, 3-6 cm, which surround the base of the lateral branches.
The basal leaves are carried by a 10-40 cm long petiole; they are three-year-old, with ovate-sharp elementary segments, equipped with a thin and pointed bristle placed in the apical part.
The flowers, made up of pink – white petals, are gathered in large umbrellas, with 30-50 pubescent rays; 2nd order shell umbrellas (compote), with wrapping of filiform bracts, licenses.
The antesis is between June and August / September.
The fruit is a 3-7 (8) x 2-4 (6.5) mm polachenary, with an elliptical outline, with a attenuated and truncated base, brownish. Mericarpi with prominent dorsal ribs, the commissurals prolonged in wings of 1-3 mm; visible visible both in the back and in the commissure.
The seeds have flat endosperm in the commissural face.

Cultivation –
Wild Angelica, as the name implies, is a plant that grows in the wild in the humid habitats of areas with a cold and temperate-cold climate.
It is however possible to cultivate it, starting from seed, with the same precautions adopted for the other species of the Angelica genus provided that it is cultivated on substrates with subacid or neutral pH, well endowed with humus and in areas with sufficient shading.

Uses and Traditions –
According to a legend, it was the archangel Raffaele who introduced the plant to men, which then took the name of Angelica.
The ancients attributed to this plant almost miraculous properties: it eradicated the plague, neutralized the effects of poisons, prolonged life span. In our day these virtues have been greatly reduced and is appreciated in herbal medicine as a stimulant of the digestive system and as an antiseptic.
As for its recognition and its possible confusions, of the numerous species (more than 100) belonging to the genus Angelica, in the Italian territory, it is possible to find, in addition to the common A. sylvestris L., only a few rare specimens, escaped the cultivation, of A. archangelica L., a species used in liquor and reported as sub spontaneous.
The two species are very similar, differing in some details, among which the color of the stem is more evident, green in A. archangelica and purple in A. sylvestris, and the flowers, whitish and greenish in A. archangelica and pink in A. sylvestris.
It is easier to confuse A. sylvestris L. with Peucedanum verticillare (L.) Mert. & W.D.J.Koch, widespread in the central-northern part of the country. There are many characters in common: both robust, tall plants with a streaked purple stem; also in this case the most evident differential element is the color of the flowers, which are greenish in Peucedanum verticillare.
Furthermore, for the less experienced, this plant could be confused with the hemlock (Conium maculatum L., 1753) which, remember, is remarkably poisonous, in all its parts, and can lead to death. In this case, however, recognition is facilitated by the fact that the hemlock, when broken, gives off a strong smell of cat urine and that, if it is chewed, there is an unpleasant burning sensation on the tongue that alerts us and makes us aware of the danger.
As regards its protection, there are no reports of general, regional or local regulations that protect this plant.
Wild Angelica is an herb with an aromatic smell and a bitter and acrid spicy flavor.
This plant contains coumarin, furocumarin, tannins, resin, starches, sugars and essential oils.
This plant is used for both food and pharmacological purposes.
For food use, fresh leaves, buds and stems are used to flavor salads. Once cooked, as a slightly bitter vegetable side dish. Chopped leaves are a pleasant addition to the sour fruit compote, especially rhubarb. The stems can be candied and eaten as sweets. The seeds are used to flavor sweets and pastries.
For pharmacological use, research has highlighted the efficacy of coumarins as anticoagulants, phlebotonics, anti-inflammatory, spasmolytic, antioxidants, antitumor, antimicrobial and antiviral agents.
No cosmetic uses are known, above all because the furocoumarins contained in it and in other congeners increase the sensitivity of the skin to sunlight and can cause dermatitis.

Method of Preparation –
For the gastronomic use of Angelica sylvestris, the leaf petioles and the tender apexes of the branches and stems can be collected, which should be collected preferably in the period of April – May (in some cases parts can still be found even in June, but the more you advance with the season, the more difficult it is to find parts of the plant that are tender and appetizing enough).
The green and tender parts can be boiled and used as a side vegetable, as well as used in cooking fish and crustaceans; the particularly tender green parts can also be used raw for the preparation of mixed salads. Another interesting use is to use chopped leaves and tender petioles in the dough for the biscuits, to which it gives a characteristic aroma (perhaps associated with that of vanillin).
In Northern European countries Angelica is widely used in the preparation of sweets and particularly appreciated is the candied Angelica, which can be prepared by following this recipe:
– take leaf stalks, which must be carefully cleaned and washed. They are then distributed in a single layer in a saucepan and covered with water and sugar: everything is boiled on a low heat for about 10 minutes and left to rest for 24 hours. The next day, add more water and sugar to cover the stalks, boil slowly for about a quarter of an hour and leave to rest for another 24 hours. On the third day, the stalks must be removed from the saucepan, the sugar syrup must be boiled for about 5 minutes to make it thicker and at the end of the boiling, the stalks must be put back in the syrup and left to rest for another day. On the fourth day, the whole mixture is boiled (always on low heat) until the syrup has been almost completely absorbed; at this point the petioles are removed from the saucepan and dried on a surface sprinkled with sugar (pay attention to let them dry strictly separated from each other). Once dry, they turn over in sugar and can be safely stored in a glass jar, preferably dark (remember that the conservation of herbs, spontaneous or officinal, is always advisable in the absence of light, which accelerates the phenomena of expiration quality of the same).