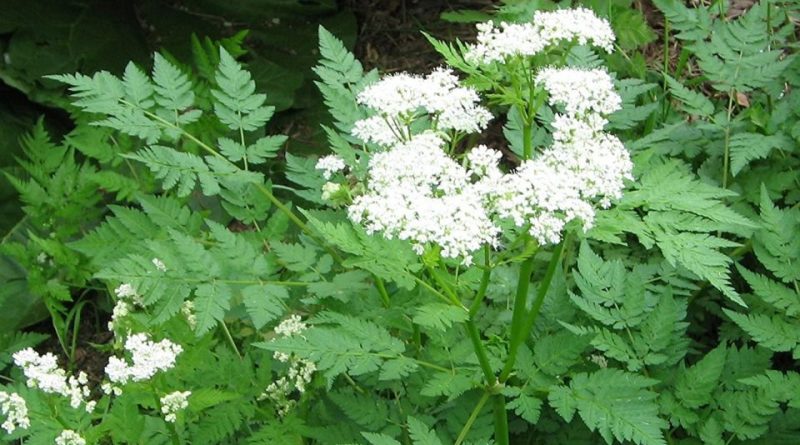 The dong quai (Angelica sinensis (Oliv.) Diels) is a herbaceous species belonging to the Apiaceae family.

Systematic –
From a systematic point of view it belongs to the Eukaryota Domain, Plantae Kingdom, Magnoliophyta Division, Magnoliopsida Class, Rosidae Subclass, Apiales Order, Apiaceae Family and therefore to the Angelic Genus and to the A. sinensis Species.

Etymology –
The term Angelica comes from the medieval Latin herba angelica, since the plant was believed to protect from the devil and cure all diseases; the legend also tells that the healing properties of this plant had been revealed to a monk by an angel.
The specific epithet sinensis comes from Sínae China: for its origins.

Geographical Distribution and Habitat –
Dong quai is an endemic plant of China, in the areas of Gansu, Hubei, Shaanxi, Sichuan and Yunnan, where it is grown or grows spontaneously in forest areas, in the bushes, at an altitude ranging from 2500 to 3000 meters. 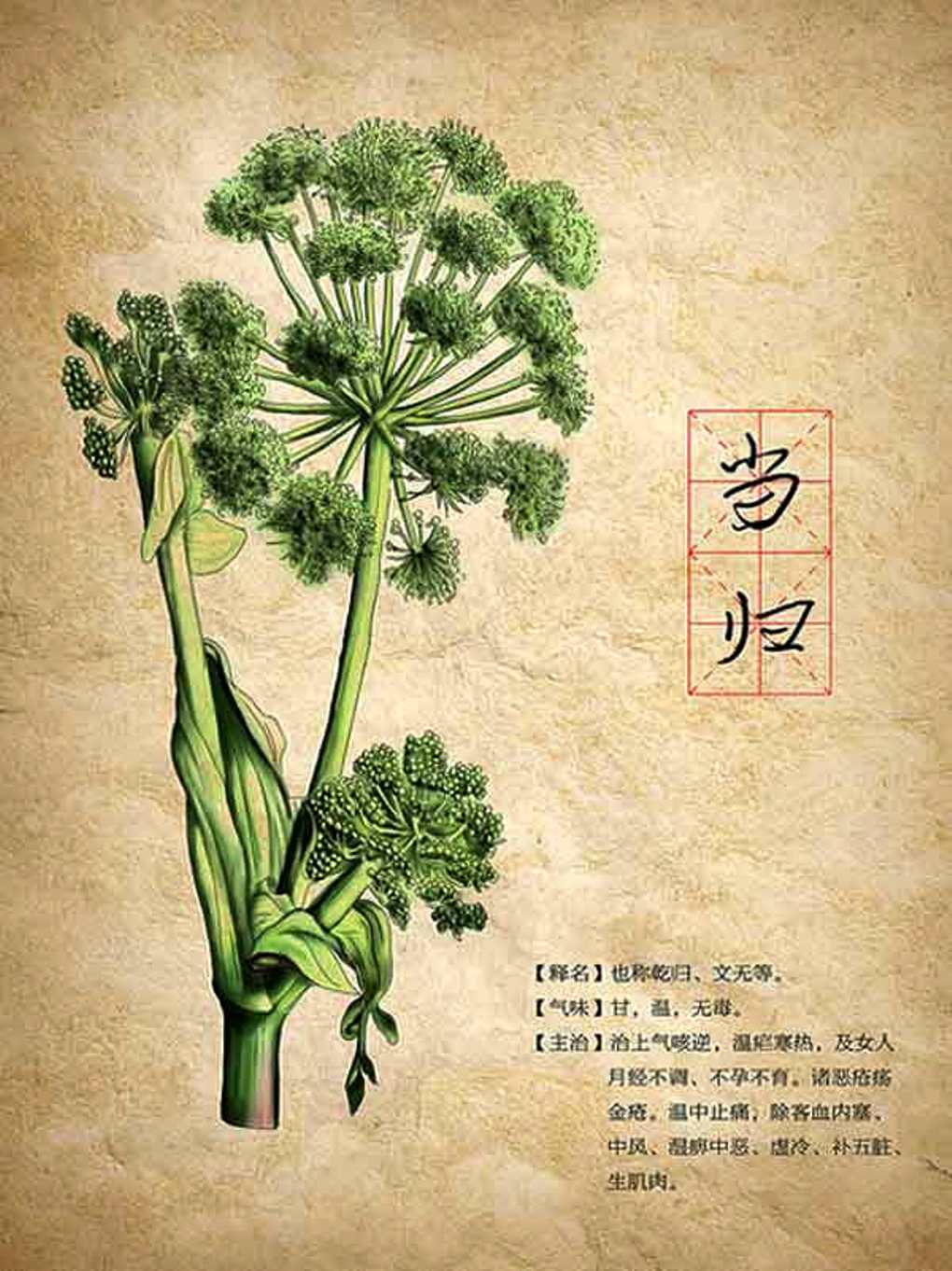 Description –
The dong quai is a biennial or perennial herbaceous species, which reaches a size of 0.4-1 m in height.
The main root is cylindrical, branched, with many roots, succulent and very aromatic.
The stem is violet-greenish in color, with evident ribs and branching at the top.
The basal and lower petioles measure 5-20 cm, with green and purple pods, ovate, with membranous margin.
The leaves are ovate 10-30 × 12-25 cm, 2-3-ternate-pinnate, with 3-4 pairs of fins, carried by a long petiole.
The inflorescences are found on 8-20 cm peduncles, pubescent or subglabrous; the bracts are absent or 2, linear, with 10-30 radii, irregular and umbels with 13-36 flowers; with thin pedicels. The flowers are characterized by white – red and more rarely violet petals.
The antesis is in the period of June-August.
The fruits have an ellipsoidal or sub orbicular shape of 4-6 × 3-4 mm, with the presence of filiform dorsal ribs, prominent ribs, wings laterally broadly thin, wings wide or wider than the body. Ripening is between July and September.

Cultivation –
Angelica sinensis grows both in mountainous wetlands and on coastal areas.
It is cultivated in Asia for medicinal purposes for the countless uses of local medicine.
The right time to grow angelica is late winter, early spring. Angelica seeds must first be sown in a greenhouse and then subsequently transplanted in the open field. The transplant must be carried out in the early spring in the open field.
It is a plant that bears very well low temperatures and harsh winters but the optimal conditions are those of a cool and humid climate.
The substrate must be moist, rich in organic substances and well drained. Before cultivation it is good to intervene with mature manure.
In transplanting, rows of seedlings should be arranged at a distance of 60-70 cm.
Watering must be regular to leave the soil moist.
The angelic plant blooms in the June-August period.
The fresh leaves can be taken at the beginning of the spring; the fruits are harvested around June before flowering.
As for the care of the plant, we recommend every 15 days to eliminate all the herbs that grow around the plant.
Be careful in the collection of spontaneous species, since being a plant very similar to the poisonous plant of the Cicuta, before touching and using it make sure that it is Angelica and not the latter.

Uses and Traditions –
In China this plant is known by the name of Dong Quai and is used in Traditional Medicine of this country where it is considered by the Asian tradition the “plant of women”, the most important female tonic.
For millennia, in fact, it has been used by the Chinese tradition for all gynecological, menstrual or menopause-related symptoms.
According to Traditional Chinese Medicine, Angelica is classified as a “hot” plant capable of stirring and toning the blood which, according to a more modern conception, is intended to improve circulation.
In Asian countries, Angelica is precisely known as a remedy in case of “blood scarcity”, that is, speaking in more western terms, in situations of anemia, pallor, palpitations and general atony.
In general, in traditional Chinese medicine this plant expresses its tonic characteristics, precisely toning the heart-lungs-liver-spleen and kidney.
Angelica sinensis is also used in traditional Korean medicine with the name danggwi (Hangŭl: 당귀, Hanja: 當歸).
The active ingredients are present in volatile oil: it contains various coumarins, essential oils, favonoids, polysaccharides, ferulates, phytosterols (beta-sitostesrol).
Among the vitamins are mainly A, E, B12, as well as mineral salts.
The parts used are the roots and the fruits.
The indications for the medical use of this plant are for:
– Premenstrual syndrome;
– Symptoms of menopause;
– Spasms of smooth muscle;
– Anti-inflammatory;
– Pain relief;
– Antiallergic Immunostimulant.
In internal use, the volatile components contained in the root seem responsible for the relaxation of the muscles of the uterine wall.
In the presence of irregular contractions of the uterus, the extract of Angelica sinensis is able to normalize contractility and increase blood flow.
The extract of this plant improves circulation because it reduces pressure, increases blood flow in peripheral vessels, reducing peripheral resistance.
The extract has been shown to reduce inflammation, pain and spasms, effects that seem to be due to the presence of coumarin derivatives.
It also appears to protect the liver from toxins and help to use more oxygen.
For its vitamin and mineral content, it helps prevent anemia.
It is recommended to reduce all the expressions of premenstrual syndrome and to regularize the female cycle.
Also recommended to reduce the symptoms of menopause, such as hot flashes, uterine contractions, pressure surges, mood swings, joint pain; it also appears to reduce the loss of calcium in the bones by preventing postmenopausal osteoporosis.
It is also used as an aphrodisiac.
As for contraindications, in general the dong quai is a plant considered safe, however it contains substances that can interact with sunlight and therefore be photo sensitizing; moreover, due to its coumarine content, it is contraindicated in subjects taking anticoagulants, also it should not be taken during pregnancy and breastfeeding.
Dong quai is traditionally considered to be a plant that increases the risk of miscarriage.
It prolongs the prothrombin time and can have interactions with drugs, in particular it increases the anticoagulant effects of the warfarin drug and consequently increases the risk of bleeding.

Method of Preparation –
The root of the dong quai is the part that is used because it is rich in active ingredients and that it also contains a volatile component, responsible for most of the beneficial activity.
The recommended doses provide for the use of root powder from 1 to 2 grams.
An infusion can be prepared with the dried fruits of Angelica; in this case, pour a cup of boiling water on 1 level teaspoon of the plant. Cover and leave to infuse for 5/10 minutes. It can be flavored with a piece of orange zest and sweetened with honey.
If you use the root you can prepare a decoction: the use involves the use of a quantity of water corresponding to 2 tea cups together with a teaspoon of roots, rinds, hard seeds and simmer for 5/10 min. Filter and drink. It is possible to sweeten with honey.
Angelica mother tincture can be used with 40 drops 1 to 3 times a day.