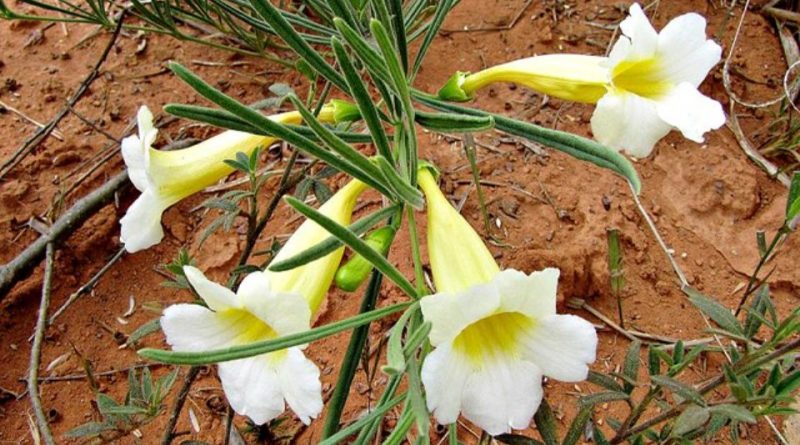 Etymology –
The term Anemopaegma comes from the word anemo, coming from the Greek ἄνεμος, wind, air flow and from the Greek paigma, sport.
The specific arvense epithet comes from arvum campo, arative soil, in reference to the growth environment.

Geographical Distribution and Habitat –
Catuaba is a medicinal plant native to the vegetation of the Cerrado, a large tropical savannah, an ecoregion of Brazil, characterized by a great biodiversity of fauna and flora.
According to the WWF, Cerrado is the biologically richest savannah in the world, characterized by a warm, semi-humid and seasonal climate, with dry winters from May to September-October. Annual rainfall is around 800–1600 mm and with somewhat poor soil. 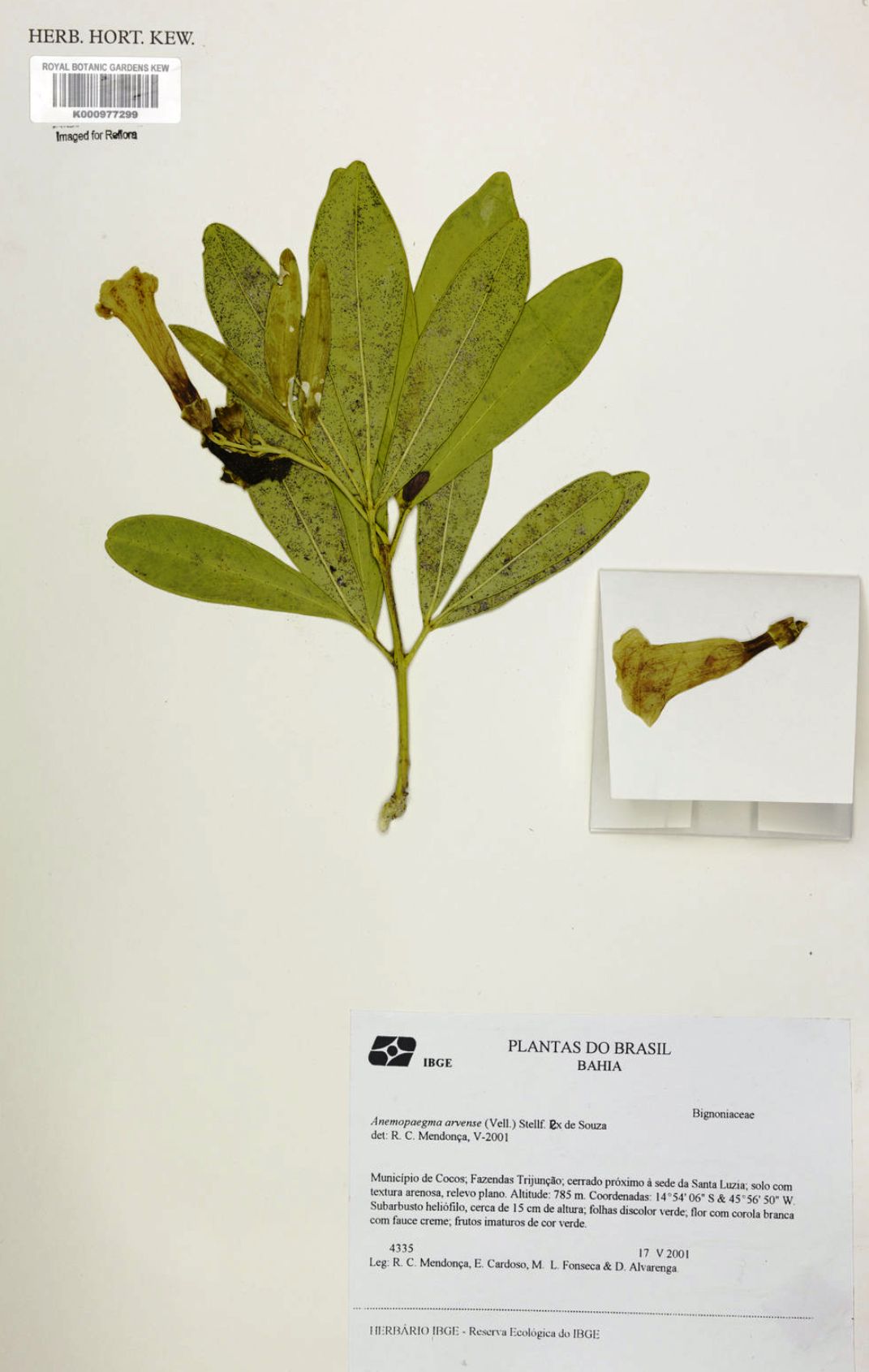 Description –
Catuaba is a small shrub-shaped plant.
The leaves are long and lanceolate, with a central rib.
The flowers are bell-shaped yellowish – white in the terminal part.
The fruits are green, rounded – ovoid.

Cultivation –
Anemopaegma arvense is a plant that grows spontaneously, widely distributed in the Brazilian Cerrado, in soils typically poor in nutrients.
Unfortunately these species, due to the tampering of some habitats, is considered an endangered species.

Uses and Traditions –
This plant, popularly known as catuaba, tatuaba, verga-tesa is used as an aphrodisiac and tonic for the nervous system and memory loss.
The part normally used is the root, although aerial parts are also used.
The species contains triterpenes, flavonoids, proanthocyanins and epicatechins replaced with phenylpropanoids, for which antimicrobial, antioxidant and cytoprotective effects have been reported.
Toxicological studies were conducted with a herbal medicine containing both Anemopaegma arvense and other species and the formulation was considered safe. However, there are no studies confirming its popular use as an aphrodisiac.
With the term Catuaba, however, there is a great deal of confusion as it refers, in addition to synonyms, to other species such as Erythroxylum vaccinifolium Mart. 1840 (synonym: Erythroxylum catuaba A.J.Silva ex Raym.-Hamet, 1936) and Trichilia catigua A.Juss., Known as the great Catuaba.
However, in the popular tradition of the Anemopaegma arvense, the bark decoction is used for sexual impotence, agitation, anxiety, nervousness, fragility of nerves, memory problems and stimulant in general of the central nervous system. It has beneficial effects in both men and women as an aphrodisiac but it is in the area of ​​male impotence that the best results have been achieved and no side effects have been highlighted even in the long term.
Furthermore, according to some research, the potential cytoprotective effects of one of the commercial extracts of Anemopaegma arvense have been demonstrated.
Currently Catuaba extracts are often used in the treatment of fatigue, insomnia, hypochondria, impotence, erectile dysfunction, sciatica. Supports the immune system and supplies energy to the body.
Some studies have shown its ability to defend skin cells against free radicals and chemicals. Its consumption therefore combats aging of the skin and the possible toxic effects on it.
In addition, a study is underway that would demonstrate how the extract of Anemopaegma arvense is able to combat the apaptosis of cells caused by neurodegenerative diseases such as parkinson’s and others.

Method of Preparation –
With this plant, herbal teas are prepared for its aphrodisiac effects, for health and skin abilities, as well as to combat the aging and neurodegenerative processes of the skin.
One method involves pouring about 200 ml of water and a spoonful of Catuaba into a container. Bring to a boil and boil for 10 minutes. Turn off and leave to infuse for 10 minutes, filter, sweeten to taste.
The method of use provides for 1 to 2 cups a day, preferably in the morning and early afternoon.