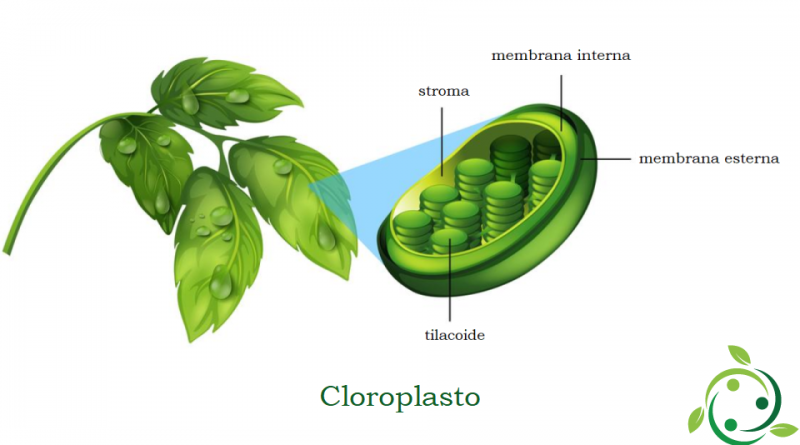 Chloroplast is a type of organelle found in plant cells and eukaryotic algae.
In chloroplasts the chlorophyll photosynthesis takes place.
Chloroplasts, due to their size, are visible under the microscope as green corpuscles (due to chlorophyll).
Chloroplasts have the characteristic of capturing light energy and transforming it into chemical energy through the action of chlorophyll.
During photosynthesis oxygen is released through the photolysis of water molecules, and this allows the Earth’s atmosphere to be supplied with oxygen.
As well as for mitochondria, their origin occurred with a process, called endosymbiosis, between eukaryotic cells and cyanobacteria (photosynthetic prokaryotes), about 1 billion years ago, and for this reason chloroplasts have their own genome (of the bacterial type) and they reproduce in the cell independently.
The endosymbiotic theory of chloroplasts, first suggested by Konstantín Merezhkovski (1905) and later supported by Hans Ris (1962) was later popularized by Lynn Margulis (1981).
Chloroplasts have a round or lenticular shape with a diameter of about 4-8 µm (1µm = 1 micrometer = 10-6 m) and a thickness of 1-3 µm.
From the structural point of view (as seen in the figure) the chloroplasts are composed of an external envelope that encloses an internal space called the stroma, which in turn contains the membranous structures responsible for photosynthesis, the thylacoids.
The envelope of the chloroplast is in turn formed by 2 lipid membranes between which there is a space, called the transmembrane space.
The outer membrane is equipped with non-selective membrane channels, from which ions and smaller molecules can pass freely.

The internal membrane, on the other hand, only allows the selective transit of the molecules and is equipped with specific channel proteins.
The space enclosed by the internal membrane, called the stroma, is composed of an alkaline and protein-rich solution where the DNA of the chloroplast, ribosomes, metabolic enzymes, starch granules or lipids are contained.
The Calvin cycle takes place in the stroma, which is the so-called dark phase of photosynthesis, which allows the fixation of inorganic carbon in organic molecules (autotrophy).
The process takes place using the energy produced by the light phase of photosynthesis and allows to obtain glucose molecules by fixing the inorganic carbon present in carbon dioxide, which is taken from the atmosphere.
Inside the stroma are the thylakids (also called thylakoid membranes). These are a system of flattened discs formed by membranes and stacked on themselves, which together form the so-called “grain”.
The different stacks of thylacoids are connected to each other through portions of the membrane called lamellae (or intergrana tilacoids).
Thylacoids are the organelles where the light phase of photosynthesis takes place and photosystems are present on its membranes, where the light energy is absorbed through the chlorophyll molecules to generate high-energy electrons, which are used to create a proton gradient at inside the lumen of the thylakoid.
During the process there is the photolysis of water, which through the loss of protons and electrons is oxidized to oxygen and released into the atmosphere.
The protons accumulated in the thylakoid are then released through the ATP-Synthase membrane complex, which uses the energy of the protons at the output to produce ATP (adenosine triphosphate) molecules.