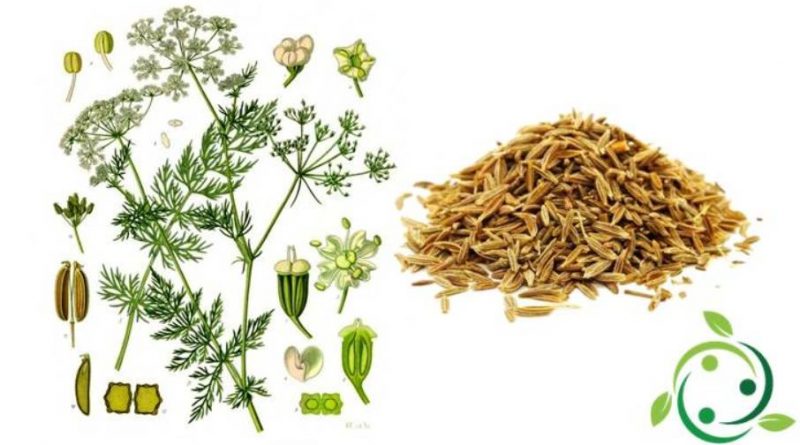 Caraway or, again, wild cumin (Carum carvi L., 1753) is a spice obtained from the seeds of this plant.

Origins and History –
Caraway is a plant native to Arabia from where it soon spread to northern and central Europe and Asia.
The etymology of the name “Caraway ” is traced back by some authors to different origins; the name could derive from the Greek word κάρον (káron) used by Dioscorides to identify the Carum carvi or always from the Greek term κάρυον (káryon) to identify the woody shell of the fruit; according to Pliny instead the name Carvi derives from the Greek name of the country of origin Κᾱρία (Karίa) in Asia Minor, a name later latinized in “Carvi”; still the name could derive from the Arabic “Karwija” then latinized in “Caria” to identify the ancient region of Asia Minor in the south west of Turkey, thus defining the plant, also in this case, as originating from the “Caria”.
Like many other spices from the Mediterranean and Middle Eastern area, it has a history that is lost in the mists of time. Certainly it is known that the Egyptians already used caraway seeds to keep bad spirits away from their dead. In ancient Rome and Greece it was used both as a medicine and in food.
Dioscorides, a Greek doctor, prescribed it to young women to massage the skin and maintain a beautiful complexion. Julius Caesar’s soldiers ate bread made from caraway roots. Caraway is probably one of the spices that has been used the most. In the Middle Ages its use had spread throughout the Arabian Peninsula and northern Europe and, as evidence of its use, seeds were found in the remains of ruins sunk in some Swiss lakes. Some seventeenth-century writings recount the use of caraway in bread, sweets and fruit salads.

Description –
Caraway is obtained from the seeds of the Carum carvi plant. It is often confused with other spices, such as cumin (Cuminum cyminum L.) from which it differs little or with black cumin (Nigella sativa L.) with which it differs both in aroma and consistency.
This spice is obtained from the seeds of the homonymous plant which is a shrub up to 50 cm tall, with elongated and thin leaves, similar to those of carrots.
The flowers are white, flesh-colored, or bright pink, gathered in umbrella-shaped inflorescences and bloom from May to September.
The fruits (the real spice), improperly called seeds, are black tapered at the ends, about 5 mm long, striped with 5 clearly visible ribs and ripen in July-August.

Active principles –
The Caraway fruits are rich in essential oils (3 to 7%) including carvone, responsible for the aroma and limonene.
From the Caraway fruits various compounds are obtained including an essential oil (3-7%), fatty acids (10-18%), proteins (20%), carbohydrates (15%), phenolic acids (caffeic acid), flavonoids ( quercetin, kempferol); tannins, alkaloids and terpenoids are similarly found in the aqueous fruit extract.
Caraway oil is present in all parts of the plant, but its concentration is higher in its fruits and the extractive form generally used is hydro-distillation.
The environmental conditions of crops contribute significantly to the bio diversity of Caraway which produces low quality fruits when the plant grows in excessively hot and dry climates; the fruit quality variables determine a variation in the quantity of the main components such as fatty acids.
A comparative study on the main components of Caraway fruits, of different ecotypes, has for example concluded that the Tunisian ecotype contained a greater amount of fatty acids (7.3%) than the German (5.7%) and Egyptian which was the least rich in fatty acids (2.9%). Similarly it was found for about all the phytochemical components of the fruits.
As mentioned, carvone and limonene are two of the main components of Caraway essential oil, which represent about 95% of it. Carvone is an alcohol and chloroform soluble terpenoid. Its enantiomers are both found in nature, especially in the oil of the caraway seeds of the meadows (Carum carvi), the green mint (Mentha spicata) and the dill. According to the European Pharmacopoeia, the Caraway fruits should contain at least 3% of essential oil containing D-carvone (min. 50-65%) and limonene (up to 45%) as main components and contain less than 1.5% of carveolus and dihydrocarveolus. The D-carvone, is the main component of the Caraway , is responsible for its characteristic perfume.
From a nutritional point of view, caraway seeds have interesting characteristics: they contain a good dose of protein and fat and are also rich in dietary fiber.

Among the mineral salts we find above all concentrations of potassium, sodium, zinc, phosphorus, copper, manganese, iron, magnesium and calcium; among the vitamins prevail those of the group A, B (in particular B1, B2, B3, B6), C, E and folate.

Properties and Uses –
In reference to this plant there is a lot of confusion; it is often called caraway, for example in France; in Germany and other northern countries it is called with names derived from cumin such as: kummel. In Turkey it is also called “German cumin” and this creates a bit of confusion.
The main producing countries of the Caraway are Holland, followed by Canada and the United States. But it is grown in many countries of continental Europe, which produce it for the domestic market. In Yugoslavia, up to twenty years ago, large quantities were produced and that is why, in 1963, a commemorative stamp was issued.
Among the curiosities it is highlighted how caraway seeds were placed near or inside an object considered valuable because it was said to protect it from theft. For the same reason, it was also spread in chickens and pigeons. From there, over time, the use extended to love potions.
From the point of view of its use, it is a spice with almost worldwide consumption.
In addition to the seeds, it is also possible to use the boiled roots and the leaves, in salads or as an aromatic ingredient in soups and sauces.
The spice is sold both as whole fruits and as powder obtained by grinding them.
The spice has a pungent aroma similar to anise with a very aromatic, sweet but pungent, warm flavor. Intensity scale: 3.
The spice, as mentioned, has been known for its digestive virtues since ancient times. In addition to promoting gastric processes and stimulating appetite, it helps restore the optimal share of bacterial flora and has a carminative efficacy by facilitating the elimination of intestinal gas.
For the benefit of the intestine, moreover, these seeds have antibacterial properties that make them suitable for fighting infections.
Even the respiratory system can take advantage of the beneficial activity of caraway seeds, thanks to the vapors of the essential oil contained in them.
It also has an ideal expectorant effect in case of cough and cold. The action to counteract the accumulation of cholesterol is also important, due to the amount of dietary fiber that decreases the absorption of LDL cholesterol by reducing its level.
Furthermore, the essential oil, which is extracted by distillation, enters the preparation of soaps and colonies.
Among the contraindications, it should be remembered that the intake of caraway seeds and the related essential oil is contraindicated for children under three years of age and pregnant women.
Furthermore, the use of essential oil is prohibited in the case of liver diseases or ascertained hypersensitivity to one or more components.
In general, the dose allowed daily to avoid side effects ranges from 1.5 grams up to a maximum of 6.

Preparations –
For the use of Caraway it ​​is advisable to buy the fruits, if possible whole, because, like all spices, rich in essential oils, they tend to lose their perfume, if they have been ground for some time.
Also if you consider the aroma of caraway too strong, put the seeds in a cloth before adding them to the dishes in cooking to be able to remove them at the end. Lightly toast the seeds before adding them to cheese or potato or pea dishes with which they go particularly well. Added in the last 15 minutes of cooking, to prevent a slightly bitter taste from spreading, stews, soups and sauerkraut make these dishes delicious. Spread them on spiced cakes before entering the oven.
The Caraway fruit is used to flavor stewed meats and other dishes, especially in the cuisine of Central Europe and Scandinavia. It is also used to flavor particular types of cheese and brandy.
It is also widely used in the field of herbal medicine, as mentioned, for its medicinal virtues capable of facilitating digestion and eliminating meteorism and for the mild intestinal antiseptic effect.
Essential oils are then used in the cosmetic industry for their fragrance.
The roots of the plant are edible and can be eaten boiled, like carrots.
In Lebanon it is used in Meghli, a typical pudding with rice flour, anise, cinnamon and, in fact, Carum carvi. Usually it is prepared to celebrate the birth of a child and is offered to guests in bowls, usually with grated coconut and dried fruit on top.
Caraway , much loved in Europe, both northern and central, enters the composition of rye bread and numerous desserts, sauerkraut dishes, cole slaw, a cabbage salad. In the form of an extract it is used to flavor certain liqueurs (Kummel and Shnapps). It is quite used in North Africa, especially in Tunisia where it enters the composition of Harissa, a sauce based on chili pepper, garlic and oil.
This spice can be taken through infusions or decoctions, to prepare by infusing a teaspoon of chopped seeds inside a cup of boiling water and then filtering the drink.