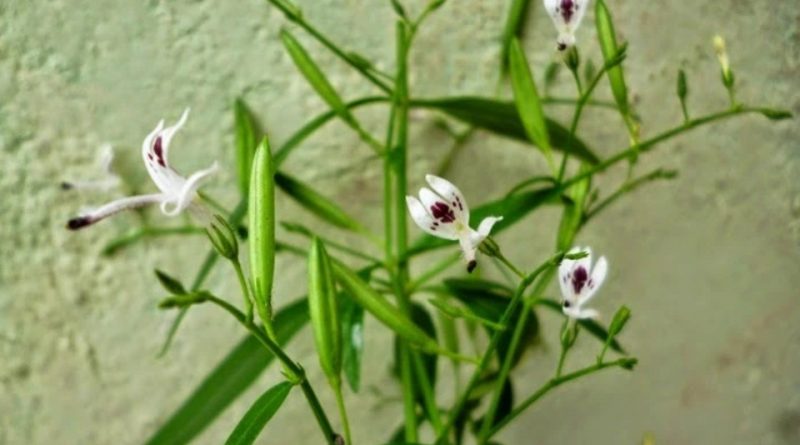 Systematic –
From a systematic point of view it belongs to the Eukaryota Domain, Plantae Kingdom, Magnoliophyta Division, Magnoliopsida Class, Scrophulariales Order, Acanthaceae Family and therefore to the Genus Andrographis and to the species A. pani culata.
The terms are synonymous:
– Justicia paniculata Burm.f., which the basionism;
– Andrographis paniculata var. glandulosa Trimen;
– Justicia latebrosa Russell ex Wall.

Etymology –
The term Andrographis comes from the Greek ἀνήρ, ἀνδρός anér, andrόs man, male and from γραφή graphé drawing, painting: painted man, for the floral lobes that recall the appearance of a man with arms raised with drawings on face and arms.
The specific epithet pani culata derives from panícula panicle: with panicle inflorescences.

Geographical Distribution and Habitat –
Andrographis pani culata is a plant native to India and Sri Lanka and is widespread in tropical Asian countries, often in isolated areas.
It was also introduced in northern parts of India, as well as in Java, Malaysia, Indonesia, the West Indies, and elsewhere in America. The species is also found in Hong Kong, Thailand, Brunei, Singapore, and other parts of Asia.
However, it is widely cultivated in South and Southeast Asia, where the leaves and roots are traditionally used to treat infections and certain diseases. The whole plant is also used for medical purposes.
Its habitat is that of the plains, hills, coasts and anthropized and cultivated areas, such as roadsides, farms and ruined territories, between the plains and hilly areas up to 500 m. 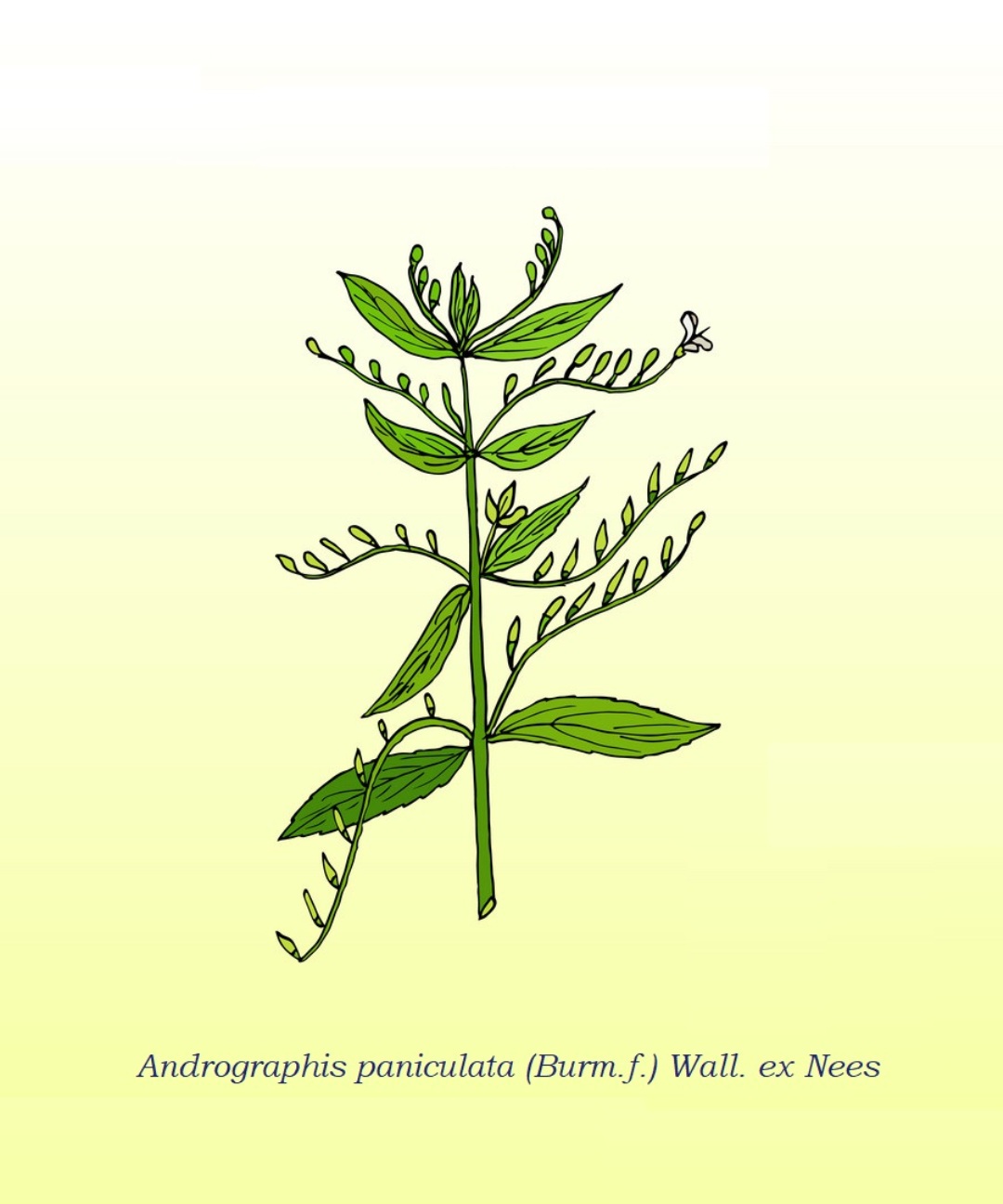 Description –
The green Chiretta or Carmantina is a herbaceous plant with an erect bearing up to a height of 30-110 cm.
The stem is thin and dark green in color, squared in cross section with longitudinal grooves and wings along the corners.
The leaves are lanceolate in shape, with hairless blades measuring up to 8 cm in length and 2,5 cm.
The flowers are small, white – pink, solitary flowers, arranged in scattered racemes or panicles.
The flowering period runs from September to December.
The fruit is a capsule about 2 cm long and a few millimeters wide and contains many yellow-brown seeds.
The seeds are sub-square, wrinkled and hairless.

Cultivation –
Andrographis paniculata is a plant that even if it develops more in wet and shady areas, the best results are in a sunny position.
The sowing must be carried out in the months of May and June in the northern areas while it can also be anticipated in early spring in areas with a temperate climate.
The plants must be put in seedbed beforehand and then transplanted at a distance of 60 cm x 30 cm.
In India, however, the main source of plants comes from the wild habitat. Under the trade name Kalmegh, there is a trade, on average 2,000-5,000 tons of plants each year.

Uses and Traditions –
Andrographis pani culata is a plant known since ancient times having been used in traditional medicine such as Siddha and Ayurvedic and in Indian tribal medicine.
This plant was perhaps not known in the Greco-Roman world, while it was already in Asian countries in 2000-3000 BC.
Traditional Indian medicine but also Chinese and Thai medicine still recommend the use of this drug in cases of fever associated with infectious diseases. In Thailand and China, its bitter properties have always been exploited to relieve digestive problems. In India it has also been used to treat diabetes, cholera, dysentery, bronchitis, gonorrhea and to “purify” the blood. In Asian countries, the drug has also been used as an anthelmintic remedy and to combat jaundice, liver disease and sore throat. In Europe, the drug is popular in the Scandinavian countries that use it as a remedy for flu and colds.
This plant is an important ingredient of the polyherbal formulation with the name “Nilavembu kudineer Choornam” in Siddha medicine.
According to the Mayo Clinic Book of Alternative Medicine, “a specific product (Andrographis combined with Eleutherococcus senticosus) can reduce the duration and symptoms of the common cold.” It is also reported that “Pregnant women should not use andrographis because it could terminate the pregnancy.”
At a clinical level, research has concluded that evidence of controlled clinical trials supports the existence of a role of this plant in the treatment of symptoms of upper respiratory tract infections.
However, there is still no scientific evidence of efficacy in the treatment of cancer.
In general, the active part, consisting of the leaves, is used in traditional Chinese medicine in the treatment of infections, inflammation, colds, fever and diarrhea.
Its properties have been confirmed by several studies and can be considered a valid support also in association with conventional therapies, for respiratory tract infections.
This plant has a dual action: both immunostimulating and useful as a prevention, while at higher dosages its anti-inflammatory action is accentuated. Useful in case of rheumatoid arthritis. It is a bitter, choleretic, immunostimulating, hepatoprotective, antipyretic, anti-inflammatory, antiplatelet, antioxidant, anthelmintic, antiviral tonic.
It is useful in case of: Bacterial and viral infections of the first tracts of the respiratory tract and reduction of the associated fever; prevention of colds and pharyngotonsillitis; prevention of urinary tract infections after shock wave lithotripsy; Enteric infections.
The most important active ingredient is a terpene lactone: andrographolide. The absorption of this substance in humans is rapid and reaches the maximum plasma concentration after about 2 hours, persisting in the circulation for about ten hours.
The best known characteristic of Andrographis paniculata is its hepatoprotective property, useful in association with other phytocomplexes for the protection and stimulation of a physiological liver activity.
Some clinical studies on Andrographolide, demonstrate the ability to increase the activity levels of antioxidant enzymes and Glutathione and to decrease the activity of lipid peroxidase which leads to the generation of free radicals that damage cells.
Andrographolide strengthens the defenses of our body by increasing the number of T lymphocytes, enhances the release of antiviral interferon, stimulating the activity of the lymphatic system which is the seat of our defense system.
Andrographolide also has antiviral properties against herpes simplex and HIV.
Among the warnings remember not to use in pregnancy. Those suffering from ulcers or gastritis should take the extracts on a full stomach to avoid any worsening of “stomach pain”
As for the composition and active ingredients of Andrographis paniculata, the major constituent is Andrografolide, in addition to other polyphenols and flavonoids. This bitter-tasting molecule was isolated in pure form by Gorter in 1911.
Other constituents include:
– 14-Deossi-11-dehydroandrografolide, in the plant;
– 14-Deossi-11-oxoandrografolide, in the plant;
– 5-Hydroxy-7,8,2 ‘, 3′-Tetramethoxyflavone, in the plant;
– 5-Hydroxy-7,8,2’-Trimethoxyflavone, in the tissues;
– Andrografine, in the root;
– Andrografolide, in the plant;
– Neoandrografolide, in the plant;
– Panicolina, in the root;
– Paniculide-A, in the plant;
– Paniculide-B, in the plant;
– Paniculide-C, in the plant.

Method of Preparation –
For the use of the potential of this plant there are commercially available standardized preparations in tablets, which contain 5.25 mg of andrographolide and dioxiandrografolide; generally it is recommended to take 4 tablets 3 times a day. For the powder, the dose is no more than 2 grams per day.
The infusion is prepared with 5 g of the product left to infuse for fifteen minutes in 250 mg of water, then it is filtered and drunk once a day.
In Asian countries a tea is also prepared, (prepared as a prolonged infusion), with the leaves and from the caule of the plant, which is consumed in the measure of 1-4 ml per day and a tincture, in the measure of 2.5-5 ml per day.
Among the contraindications, it should be remembered that its use can cause minor side effects that disappear with the suspension of treatment. Headaches, tiredness, gastrointestinal complaints and a bitter / metallic taste in the mouth can occur.