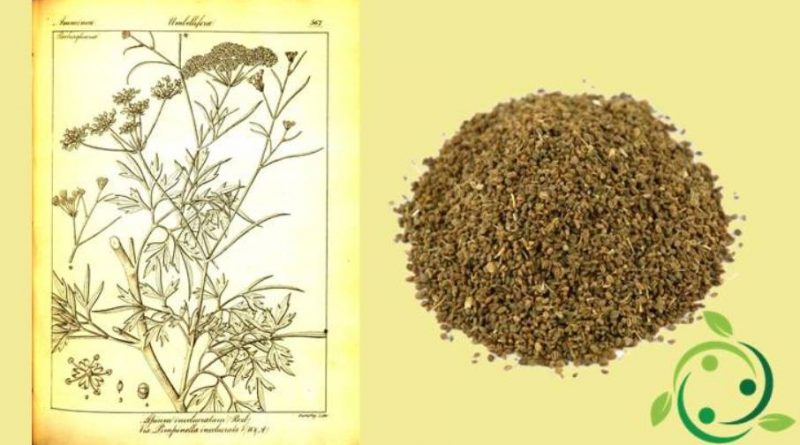 Radhuni is a spice made from fruits from some aromatic plants including (Trachyspermum roxburghianum (DC.) Craib) and (Trachyspermum ammi (L.) Sprague ex Turrill).

Origins and History –
Radhuni is a little-known spice, at least in some countries, with probable origins in Egypt and is widely used in India, Iran, Afghanistan as well as, of course, in Egypt.
According to the esoteric beliefs of its countries of origin, Radhuni would be an excellent talisman against diseases and misfortunes.

Description –
The radhuni is obtained, as mentioned, from two herbaceous and annual aromatic plants belonging to the Apiaceae family, coming from the Middle East and India and is currently widespread mainly in Iran and Afghanistan.
From the flowers of these plants, fruits (seeds) are obtained which are ovoid carpophores, 1.5-3 mm by 1.5-2 mm, with the apex contracted to form a short, pubescent neck with short hairs and bristling. These have two slits at the base that make them easily divide into two mericarps each functioning as a seed. Dried they are of a bright yellow color.
The aroma is a bit reminiscent of parsley, while the flavor has more in common with celery, thyme and cumin (slightly spicy and slightly bitter).
The parts used, besides the fruits are also the leaves, as an aromatic herb.

Active principles –
The seeds of these plants contain an essential oil composed essentially of limonene, a-terpene, dipentene, d-linallol, terpineol, dl-piperitone, thymusquinol, thymol and ketonic acid. They are also rich in iron and calcium and contain coumarin, bitter substances, tannins and resins.
On average they contain from 1 to 5% of essential oils and coumarins.

Properties and Uses –
Radhuni is often confused with ajwain or celery seeds both for the size of the fruit and for the appearance and aroma. Also called ajmud or wild celery.
The major producing countries are mainly India especially for the domestic market, Sri Lanka and Indonesia.
The spice is used, as well as in the producing countries, in the Philippines, Iran, Afghanistan and Egypt, while it is almost unknown in Europe.
Given the size of the fruit, to have 30 grams of spice it takes about 60,000 seeds.
Radhuni, as mentioned, has a strongly aromatic odor similar to parsley and a flavor similar to celery and fenugreek, bitter, spicy.
It is a very strong spice: a couple of pinches can easily overwhelm a curry. In Bengali cuisine the seeds are used whole, quickly fried in very hot oil until they crackle. Sometimes they are part of a local blend of panch phoron (five-spice Bengali) which replaces black mustard seeds; the other ingredients are cumin seeds, fenugreek seeds, fennel seeds and kalonji. In other places, a common use is in pickling or spice blends.
Among its uses in the kitchen it is used dry or roasted or fried in oil. It is widely used together with beans, because it helps reduce flatulence. It is one of the ingredients of berberè, a mixture of spices from Ethiopian cuisine which is used to prepare stewed meats and soups.
In addition, on a therapeutic level it is commonly used as a herb for diarrhea, gastritis, loss of appetite, vomiting, abdominal distension, stomach pain related to indigestion and also for worm diseases.
In fact, as well as for food purposes, radhuni has been included since ancient times in the list of Ayurvedic remedies; in India it is still used in liver diseases and respiratory diseases such as asthma, colds or bronchitis. Also used to strengthen appetite and increase hemoglobin in the blood and as a pain reliever.
Outside the areas of production and consumption it is a spice that is difficult to find and can be replaced by celery seeds.
Essential oil has bitter, thermogenic, antispasmodic, tonic, stimulating, antielmitic, carminative properties.
Listed below are all the properties reported for this spice:
– helps to counteract meteorism, reabsorbs the gases produced inside the stomach and intestines;
– antibacterial, it is a strong germicide;
– calms stomach upset;
– is considered an aphrodisiac;
– promotes digestion;
– it is antiseptic;
– antifungal;
– effective against lung diseases, asthma in particular, bronchitis, cough, sore throat and cold;
– useful against liver diseases;
– excellent against appetite;
– has analgesic properties;
– increases the production of hemoglobin;
– tones spleen, heart and liver;
– helps improve blood circulation;
– improves the absorption of nutrients;
– helps soothe the pain of toothache, headache and earache;
– has a calming effect, ideal for anxious and stressed people;
– calms menstrual pain.
Among other uses it is also used as a mosquito repellent.
Among the warnings for the use of Radhuni, it should be remembered that, given its properties of improving the absorption of nutrients, it can be taken during pregnancy and breastfeeding with the consent of the doctor.
In addition, excessive consumption can lead to uterine contractions.
If we want to give radhuni-based remedies to children, we need to seek the advice of the attending physician.
Radhuni oil should not be used pure and should be kept away from mucous membranes and away from children and sunlight.
Finally, an ecological news: the plants of Trachyspermum have the particularity of hosting the caterpillars of butterflies and are therefore also used as ornamental plants, to fill the garden with butterflies in the summer season.

Preparations –
For use in the kitchen of this spice, as mentioned, remember that it has a very strong aroma; a couple of pinches can cover the aroma of a curry. It must be used with caution so as not to overpower the flavor of the dish.
In Bengal cuisine, as mentioned, the fruits are used whole, quickly fried in hot oil until they crackle. Enter the authentic and traditional composition of the Bengal panch phoron (where it is usually replaced by mustard seeds), together with cumin, fenugreek, fennel and nigella.
It is also used for chutneys, other spice and pickled blends. It is used to flavor beans and legumes. To marinate meat and as a preservative for canned foods.
Radhuni can be used in plain rice: by adding a small handful of this spice to the water during the last minutes of cooking, thus obtaining a very tasty and decidedly original rice.
Furthermore, for its therapeutic properties, other uses of this spice can be made.
Let’s see some:
– drink a decoction before and after meals to improve digestion, avoid a swollen belly, increase appetite;
– it can be added to vegetable milk or apple juice to relieve stomach discomfort and colic;
– to combat the evils of the season we recommend taking a decoction once a day based on: radhuni, ginger, cloves and a little honey;
– to cope with a long recovery, it is recommended to prepare drinks made from coconut or spelled milk to which must be added pureed almonds, honey, a pinch of ginseng, half a teaspoon of radhuni powder and a pinch of cinnamon;
– against a tickling cough you can mix a pinch of radhuni powder with honey and lemon, two teaspoons a day are enough;
– the cold decoction of radhuni is a good mouthwash against toothache and inflammation of the oral cavity;
– the decoction is also useful for driving away fleas and lice;
– the decoction can be used with shampoo during washing to eradicate dandruff;
– radhuni oil proves to be a good natural remedy for joint pain, warms it up and is used to massage painful areas;
– the oil is also used against psoriasis (after consultation with the dermatologist), as a scar, to tone the skin, reduce the acne problem, to close pores and for a better shave;
– a poultice made with pounded radhuni seeds combined with the oil of the same can be massaged on the chest to help fight asthma;
– to treat bruised areas or with pinches of mosquitoes, just mix a little apple vinegar with radhuni powder and apply on the area to get relief;
– hot radhuni seed packs help relieve neck and headache pain.