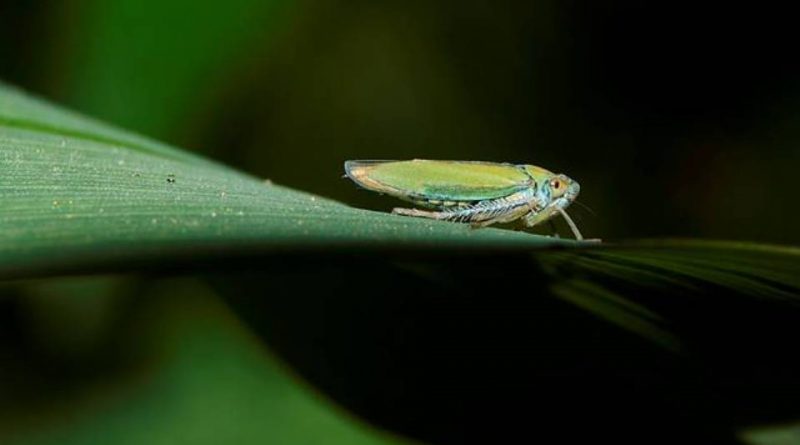 Geographical Distribution and Habitat –
The Empoasca vitis is an insect widespread throughout the Palearctic region and present in Italy where it is present mostly in the northern areas.
The insect lives at the expense of various herbaceous and arboreal plants, including: hemp, solanaceae, linden, apple tree, pear tree, plum tree, peach tree, peach tree, oak and ornamental plants but above all on the vine.

Morphology –
Empoasca vitis can be recognized in the adult stage as these are light green in color with golden undertones and 2-4 mm long.
The nymphs have a light green color, tending to reddish and the nymphs are light green.
In the juvenile stadiums they have tapered shape, devoid of wings but able to move at speed.
The eggs are oblong, white and about 0.7 mm long.

Aptitude and biological cycle –
The Empoasca vitis spends the winter in the adult stage on persistent leaf plants (pine, juniper, etc.) and in hedges.
Arrived in the period between late April and May, it goes to the lower page of the leaves, laying eggs in the ribs.
The development of the insect, which takes 3 weeks to reach the adult stage, includes 5 stages (2 of nymphs and 3 of nymphs).
From the hatching of the eggs, which takes place in 5-7 days, there is the first generation that flickers in the period of June. This generation follows one in the period of August, which is the one that causes the most damage, and a third in the period of September-October.
In general, this insect can perform, however from three to four annual generations, with the first two more incisive in terms of economic damage.
Immature forms prick the young secondary ribs to feed. Almost mature nymphs and adults prefer the center of the flap, sometimes the petiole or buds.
The species prefers the lower page of the leaf, on which the exuvias can remain; if you disturb the youthful forms they move moving sideways with respect to the body axis.

Ecological role –
The Empoasca vitis is a phytophagus that, until the 70s of the Corsican century, had been underestimated. The damage caused by it was often attributed to nutritional imbalances, drought, burns or phytotoxicity.
The insect, through the pungent-sucking mouthparts, pricks the leaf veins, where small brownings can be noticed. These stings, performed by the buzzer to feed, absorbing the lymph from the cribrose vessels, stop the flow of the processed lymph and cause chromatic alterations to the leaf flap.
On the white berry vines marginal yellowing is noted, while in the red berry vines sectoral redness develops at acute angles (mosaic symptoms) delimited by the veins of the leaves. Subsequently, on these vines a triple leaf coloring is highlighted: the central part remains green, the edges become reddish-brown and between the ribs there are red mosaic spots. On the other hand, in the white grape varieties, the spots remain yellow.
In the presence of massive attacks, the leaves can dry out, with the margins that fold down and with the possibility of an early phylloptosis that proceeds from the bottom up.
Since these symptoms can be confused with viral causes (leaf curling), nutritional causes (deficiency of potassium or magnesium) or wood diseases such as the disease of the vine bait l, the insect, which is small, can not be diagnosed immediately.
The most serious damages are caused by summer attacks, due to the 2nd generation, especially in the presence of hot – dry climatic conditions. Juvenile stages are more harmful than adults, since being less mobile they make more intense attacks on the same leaf.
As for the practices to limit the proliferation of the insect, and its consequent damages, it is advisable not to proceed with the use of insecticides as these will soon unbalance the biocoenoses of predatory insects and parasites which, alone , manage to contain it.
It is above all the hymenoptera mimaride Anagrus anatomus, which is a parasitoid of the eggs of Empoasca vitis and other cicadas (present on bramble, hazel, dog rose) which plays an important role in allowing the antagonist to overwinter. Even the hymenoptera Stethynium triclavatum can parasitize the eggs of Empoasca vitis.
Agronomic practices are also important. High trimmings are recommended, which maintain a greater leaf surface and can compensate for the damage of the buzzers.
To understand the degree of economic danger of Empoasca vitis, in the areas particularly subject to attacks, a threshold of about 2 nymphs per leaf is considered at the beginning of July, sampling the leaves of the basal and middle part of the branches.
Alternatively, yellow chromotropic traps can be used, placed at the height of the bunches and parallel to the vegetation.
The survey of captured adults and idi parasites should be carried out weekly.
In the presence of parasitoids, an intervention threshold of 500 adults / trap is considered; if the parasitoids are absent, a check should also be carried out on the leaves.
If the agronomic practices have been respected, especially even in the adoption of not excessive fertilization techniques (such as nitrogen ones) and in environments that have maintained a sufficient ecological balance (areas that are not excessively specialized and the presence of sufficient natural biodiversity), the chemical it’s necessary.
In conditions far removed from those envisaged, the biocoenosis system can benefit this insect which, at this point, is chemically contained.
The chemical struggle is applied to the crossing of the threshold remembering that the greatest danger is represented by the attacks of the 2nd generation individuals in the month of July. Generally we recommend an intervention with phosphoric esters active against buzzers (1st and 2nd generation) and moth of the vine, performed in late June – early July. This intervention is also effective against the much more dangerous cicada Scaphoideus titanus, the carrier of the golden flavescence.
In case of specific interventions on behalf of Empoasca vitis, products based on flufenoxuron or etofenprox can be used, taking care to carry out the intervention in the early hours of the morning, when the insect is still numb and not very mobile, carefully spraying the innermost parts of vegetation. It should also be remembered that sulfur, used as a fungicide, has a moderate containment effect on the buzzers.