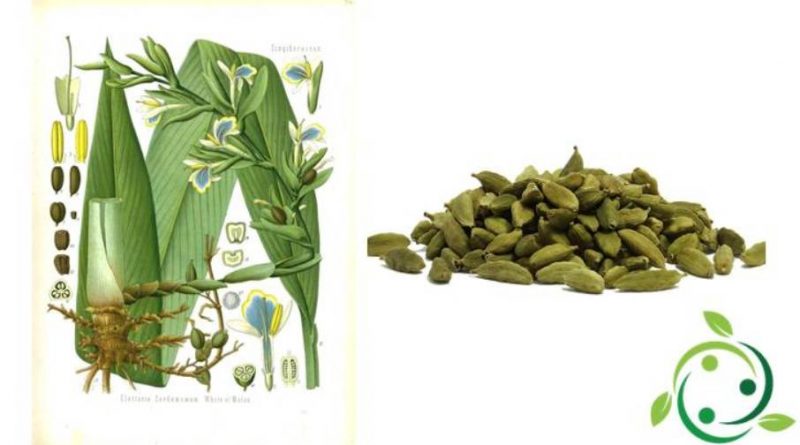 Cardamom is a spice obtained from the Electaria (Elettaria cardamomum (L.) Maton) but also from some plants belonging to the Zingiberaceae family.

Origins and History –
Cardamom is a spice of very ancient use so much that it was already known in Europe since the times of the Greeks and Romans, who used it to produce perfumes, and is currently known as the third most expensive spice in the world after saffron and vanilla.
The Indians used cardamom in the kitchen as early as the third millennium BC. The Greeks discovered it only in the fourth century. B.C. importing it at a high price from the countries of origin. Through them this spice arrived in Rome, where lovers of good food and lavish banquets adopted it without hesitation also for its digestive properties.
In ancient traditional Arab and Indian medicines it was recommended to chew the seeds to purify the breath, to use it in the kitchen to facilitate the digestion of fatty foods and dairy products, to boil it in hot drinks during the winter season to treat respiratory diseases.
In the West the aphrodisiac qualities of cardamom were praised in the nineteenth century, so much so that at the end of that century the spice was included among the best sexual arousals, thus obtaining a definitive reputation in this sense. According to popular tradition, cardamom seeds were believed to help win the heart of the desired person if added to a dish or drink intended for them.

Description –
The aromatic seeds contained by the green cardamom pods are, together with saffron and vanilla, among the most expensive and precious spices in the world.
The Elettaria cardamomum plant, from which the seeds are harvested, is a long-leaved shrub that can reach a height of two meters, native to the rainforests of Kerala and Sri Lanka, in the south of the Indian subcontinent, but today successfully cultivated in Guatemala.
The fruit looks like a capsule containing many small brown-black seeds. The seeds are used as spices, but since they lose their aroma very quickly, the entire capsule, generally dried, is commonly stored and marketed.
Cardamom, however, is obtained from two genera of the Zingiberaceae family; both have species with local diffusion, from which products of different quality are obtained:
Of the three main varieties that are used in the kitchen: green is certainly the most prized, for its intense and balsamic aroma, halfway between eucalyptus and camphor; the brown-brown one with hints of smoked wood, and the decidedly lighter and more delicate white one, are much less appreciated and used by cooks.
The types of cardamom, with their distribution are as follows:
– Elettaria cardamomum, plant distributed between Iran, India and Malaysia. From it the green cardamom or real cardamom is obtained;
– Elettaria repens, grows in the area of ​​Sri Lanka and the spices obtained from it are called Ceylon cardamom;
– Amomum subulatum, known as black cardamom or also as Nepalese cardamom. It is the most common to find because it is the most cultivated; in fact, the world’s largest producer of black cardamom is Nepal (6,647 tons in 2006). Its cultivation is also widespread in Sikkim. The large production, and the greater availability on the markets, limits the price to an accessible level.
– Amomum costatum, widespread in China and Vietnam and particularly present in the cuisine of these countries;
– Amomum compactum, widespread in Thailand and Burma and known as Siam cardamom.
Other types of cardamom include those obtained from plants of the genus Amomum, such as brown cardamom, Kravan, Java cardamom, Bengal cardamom, white cardamom or red cardamom.

Active principles –
As said the cardamom spice is obtained from the fruits of the plant, small oval pods of pale green color and about 1 cm long which contain small black seeds inside them. It is precisely these seeds that have a high aromatic power and to be used once dried.
Cardamom contains numerous vitamins (A, B1, B2, B3, B6, C) and numerous mineral salts, such as manganese, calcium, potassium, zinc, iron, phosphorus, magnesium and copper. It is also composed of: 8% water, 28% fiber, 6.5% fat and 11% protein and carbohydrates.
However its main component consists of an essential oil that contains several substances including limonene, nerol and geraniol, which gives cardamom its beneficial properties.

Properties and Uses –
Today cardamom is one of the most important spices in Arab cuisines, from the Middle East to the Gulf countries, the Indian subcontinent, but also to Scandinavian and Central European patisserie. It is in fact widely used to flavor the unique rice, meat and yoghurt dishes of the Bedouin tradition (mansaf) and moghul from northern India (biriani), added whole or chopped with numerous other spices from the blends of baharat, curry or masala.
In the therapeutic field, cardamom has a beneficial action on different organs and systems of the human body.
It is important at:
– digestive system; not only because it helps digestion, but because it has beneficial properties in case of stomach pain and intestinal problems, such as irritable bowel, diarrhea and even hemorrhoids. Of particular note is its ability to relieve abdominal swelling, significantly alleviating the symptoms of flatulence and bloating;
– for the oral cavity; as cardamom has useful properties in case of sore throat and cough, it is a real cure-all for colds, since it is able to free very quickly the respiratory tract occluded by mucus, while fighting the typical tiredness and exhaustion of the flu states. Given its aroma, cardamom is also able to effectively fight bad breath and refresh the mouth, helping to keep the entire oral cavity clean. It also reveals a natural remedy in the treatment of toothache and gum inflammation so it is useful to use it as an infusion, as well as for the treatment of diseases of the respiratory tract.
– for disorders of the urinary system;
– to burn fat, as it speeds up the metabolism;
– to improve cardiovascular function and circulation thanks to its anti-inflammatory properties;
– to lower blood pressure, so it is useful in case of hypertension.
In its food use, the flavor of cardamom is perfectly suited to flavor the desserts of dried fruit and wholemeal flour (pain d’epices), but also tropical fruit salads, jellies, ice creams, creams and spoon desserts, of milk and dried fruit. Particularly suitable also for decoctions and infusions, from Arab coffee to black tea in the countries of the Horn of Africa or cut into milk in the Indian chai recipe, but also in the glogg, the hot spiced wine served in the Nordic countries and in Belgian Trappist beers.
In particular, it is widely used as an aroma in the preparation of Turkish coffee, Arabic coffee and Iranian tea. In Middle Eastern cuisine, Iranian, Turkish and Indian cuisine is used to flavor sweets and spice blends. It is also used in the cuisine of the Nordic countries (for example in Sweden and Finland). Green cardamom has an intense and strongly aromatic taste from which black cardamom differs which is more astringent, slightly bitter and with a hint of mint. A small pod is enough to flavor a dish. In India, black cardamom seeds are often an important component of garam masala and to flavor rice or are mixed with betel leaves and areca fruits to form a bolus called betel that refreshes the breath and promotes digestion. In China they are used to flavor roasted meat dishes and in Vietnam they are used as an ingredient in the broth for noodle soup called Phở. In Ethiopian and Eritrean cuisine they are used in the preparation of Himbasha, a celebratory bread. Although the taste is quite different, black cardamom is often used as a substitute for green cardamom because it is much cheaper.

Preparations –
For use in the kitchen, remember that the aromatic power of the spice, contained in the dark seeds protected by the shell, is very volatile and rapidly disperses in the environment in contact with the air; for this reason it is better to use cardamom when the seeds are still protected by the shell and chop it only when the recipe is prepared. Cardamom must be purchased when its rind is a beautiful bright green color, a sign of freshness and good conservation, avoiding the pods that have a color that turns to beige, certainly more seasoned or poorly preserved.
On the market cardamom is found both in powder and in green fruits, which are nothing but the dried pods of the plant containing inside them the black seeds with beneficial power.
The pods are broken to extract the seeds, which in turn are ground and toasted to obtain the spice powder, or used as such for the preparation of infusions and herbal teas.
Cardamom can be used in many different recipes and ways:
– added to the dough for desserts to flavor cakes and creams;
– added to first and second courses, to revive and flavor them, thanks to its strong and spicy smell and slightly spicy and fruity aroma;
– used in many spice mixes, first of all curry, but also garam masala, typical of Indian and Pakistani cuisine and in berberé;
– to flavor liqueurs (such as the glogg, Swedish version of mulled wine) and drinks, first of all coffee. “In this regard – says the doctor – Arab or gahwa coffee is now famous, which is prepared by adding 2 or 3 cardamom seeds in the coffee powder, but in some cases the percentage of cardamom may be even higher than that of coffee”;
– to prepare infusions and herbal teas.