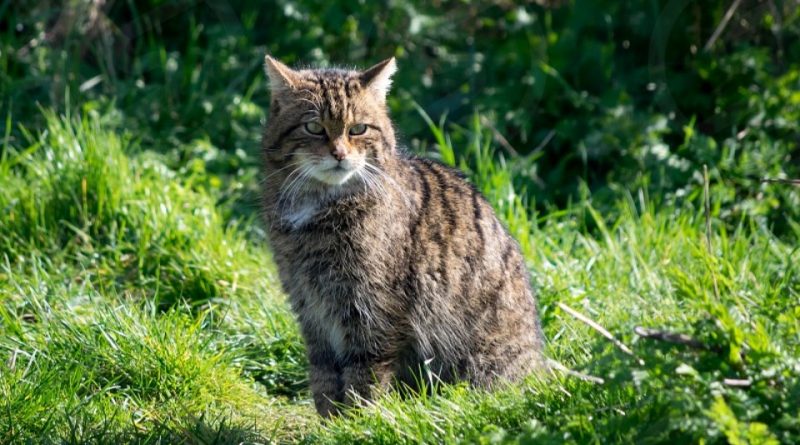 The European wildcat (Felis silvestris Schreber, 1777) is a mammal belonging to the Felidae family.

Systematic –
From a systematic point of view it belongs to the Eukaryota Domain, Animalia Kingdom, Phylum Chordata, Mammalia Class, Carnivorous Order, Feliformia Suborder, Felidae Family, Felinae Subfamily and therefore to the Genus Felis and to the Species F. silvestris
Five subspecies are currently recognized:
– F. s. silvestris Schreber, 1777 – European wild cat, which was widespread in the past throughout Europe and absent only from the Nordic European regions corresponding, roughly, to an area between Finland, Norway and Sweden;
– F. s. bieti Milne-Edwards, 1892 – desert cat of China, present in western China, mainly in Qinghai and perhaps also in north-western Sichuan;
– F. s. cafra Desmarest, 1822 – South African wild cat, widespread in southern Africa;
– F. s. lybica Forster, 1780 – African wild cat, widespread throughout North Africa up to the Arabian Peninsula and the Caspian Sea;
– F. s. ornata Gray, 1832 – Asiatic wild cat, widespread from the eastern banks of the Caspian to western India and, to the north, to Kazakhstan, western China and southern Mongolia.

Geographical Distribution and Habitat –
The European wildcat is a mammal with a fairly wide distribution, also due to its subspecies, and represents the feline with the largest spreading range.
The range goes from Eurasia to Africa where it is widespread on most of the continents with the exception of the northernmost areas of Eurasia.
In Italy it is present throughout the central and southern area, in Sicily and Sardinia. The northern limit of its distribution is represented by Tuscany, Umbria and the Marches. In northern Italy the species is reported on the border between Liguria and Piedmont and in Friuli, while it is absent from the northern Apennines and most of the Alps.
Within its species, however, it is present in various areas with different subspecies.
The European wildcat is widespread from the south to the north of Europe, with the exception of the northernmost areas, up to Italy but with a fragmented distribution due to the destruction of many of its habitats.
The African wild cat is widespread in most of Africa, with the exception of the equatorial rain forests and, above all, the real deserts; it is also present in the Arabian Peninsula and in the Middle East, up to the Caspian Sea.
The Asiatic wild cat is encountered from the eastern shores of the Caspian Sea to western India, Kazakhstan, southern Mongolia and western China.
The habitat of this species is somewhat varied even though it is generally absent from cultivated areas and tropical rain forests and only rarely goes inside desert areas. 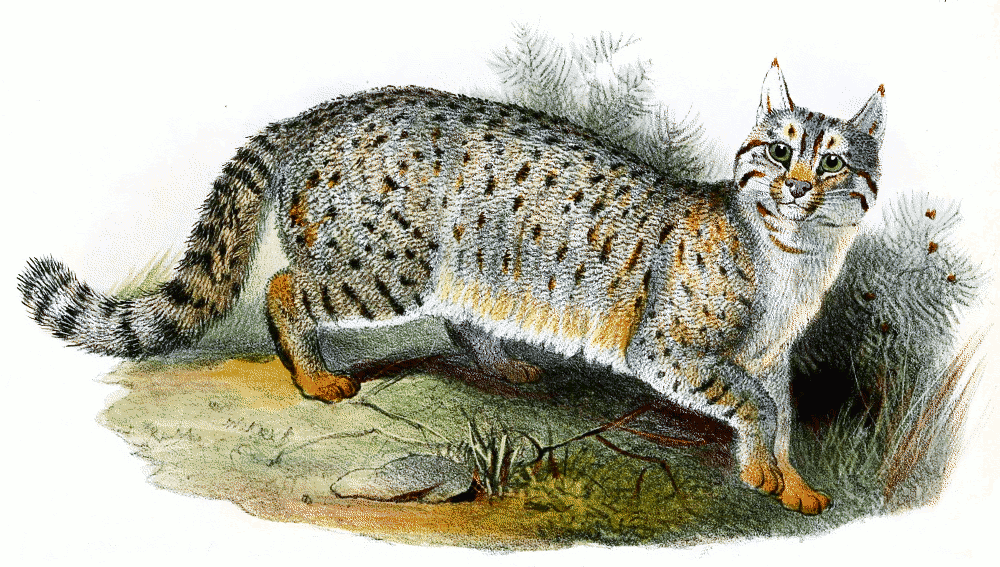 Description –
Felis silvestris is a more massive feline than the domestic cat, with a head-body length of 45-80 cm, a tail length of 29-40 cm, with a shoulder height is 25–45 cm. and a weight of 3.5-8 kg and with a little evident sexual dimorphism, with the male bigger than the female and with the most massive head.
It is recognized for its relatively long, soft and thin hair; yellowish-gray upper with narrow black strip on the back; hips and other body portions streaked with black; inferiorly white-yellowish.
The head is round, the nose pink, with relatively large and yellow-green eyes.
The legs are of medium length, with the front ones with 5 nails and the hind ones with 4.
The tail is long, uniformly bushy, with black rings and apex.
Within the species there are also morphological differentiations that characterize them.

Biology –
The European wildcat reaches sexual maturity in the year following birth.
This species mates in a variable period also depending on the subspecies, with the European one in the period between February and March and the South African one during the wet season, when the preys are more abundant. The North African wild cat, on the other hand, has been seen reproducing at any time of the year, without any preference for a particular season.
Generally, however, they reproduce only once a year, although a second brood may be born if all the components of the first die.
Before giving birth, the female prepares a den in the subsoil or in another sheltered place.
The brood includes one to five young, but those consisting of three to four young are the most frequent.
The estrus lasts from two to eight days and gestation varies between 56 and 69 days, although in African subspecies it tends to be a little shorter than in Europe.
At birth the kittens weigh 75-150 g and are blind and unarmed.
At the beginning they have a spotted fur which subsequently, during growth, takes on the definitive striped one.
The chicks open their eyes after seven to twelve days and begin to get food on their own at ten to twelve weeks of age.
Towards the two months they are fully developed and begin to lead independent lives after the third month; within the first year of life, when they reach sexual maturity, they are already able to occupy and defend their territory.
Wild cats live up to sixteen in captivity.

Ecological role –
Felis silvestris is an animal is extremely cautious towards humans and always tries not to get close to inhabited areas and genetic, morphological and archaeological tests indicate that the domestic cat was domesticated starting from the African wild cat, probably between 9000 and 10,000 years ago, in the Fertile Crescent, coinciding with the birth of agriculture and the need to protect crops from granivorous rodents.
It carries out a solitary life and each specimen defends an area of ​​1.5 – 12 km², depending on the local environment, and has mainly twilight-night habits; solitary, in pairs or in family groups, where he lives in wooded or bushy areas.
Males tend to have larger territories than females, and their range overlaps that of three to six neighboring females.
Wild cats of both sexes mark their territories by depositing feces in exposed places and releasing odorous markings by spraying urine, rubbing their cheeks and scratching the ground.
The natural antagonists of the wild cat are foxes, martens, golden jackals and jungle cats.
In fact, for these last two species, where the ranges of the two species overlap, as in the Caucasus, the jungle cats inhabit the plains, while the wild cats live in the beech forests that grow on the slopes of the mountains; in addition, in places where one of the two species is present, the other is completely absent or is present only with a few specimens also in central Europe martens kill the wild cat offspring, and occasionally also attack adult specimens.
From a food point of view, the wild cat is essentially carnivorous; in fact, it feeds on insects, small mammals, in particular rodents and rabbits, with lizards making up the third main prey in Portugal, and birds the least common. It is, however, an opportunistic predator, which in various cases has also been seen to devour amphibians, fish, mustelids, scorpions and even small deer or antelope.
Plant nutrition constitutes only a very small part of its diet.
As regards its ecological role and its relationships with habitats, the wild cat is linked to forest habitats, in particular of broad-leaved trees, above all for the protection offered by vegetation.
In general, it tends to avoid areas of high altitude, probably in relation to snow, which can constitute an obstacle to moving and hunting activities.
The main threats to this species are represented by the fragmentation of forest habitats, competition and hybridization with the domestic cat, the diseases transmitted by the domestic cat, the direct persecution by humans. Hybrids between domestic and wild cats have been observed in a large part of the European and extra-European range, and have been obtained in captivity, although the difficulties in identifying the level of purity based on the morphological characters make it impossible to determine the exact degree of hybridization of the populations (P. Genovesi in Spagnesi & Toso 1999).
As regards protection and conservation measures, the species is included in CITES Appendix II, Appendix IV of the Habitats Directive and Appendix II of the Bern Convention. In Italy the wild cat is protected by law 157/92 on hunting and is included among the species of community interest that require strict protection by the D.P.R. 357/97. It is present in protected areas.
Furthermore, Least Concern is evaluated by the European Mammal Assessment (Temple & Terry 2007).