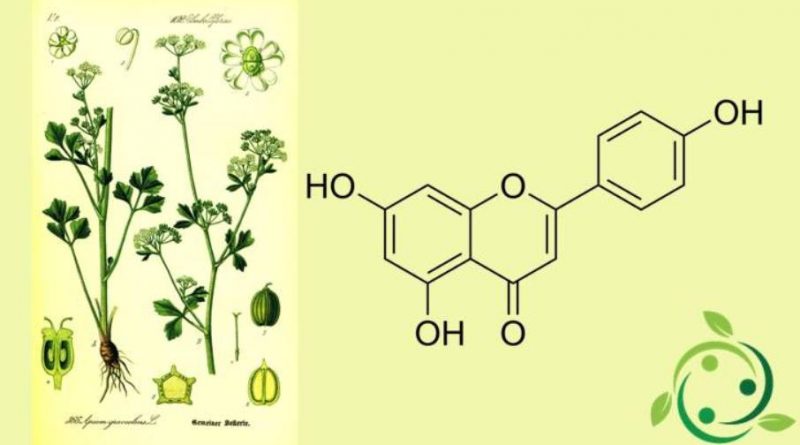 Apigenin, whose term in the IUPAC official nomenclature is: 5,7-Dihydroxy-2- (4-hydroxyphenyl) -4H-1-benzopyran-4-one is a flavone with brute or molecular formula: C15H10O5.
Apigenin is present in celery and parsley leaves, in chamomile leaves and many other plants and is also the aglycone of numerous natural glycosides, such as roifoline and isovitexin.
Apigenin looks like a yellow crystalline solid and in the past it has been used to color wool.
In chamomile leaves, it is the major active ingredient responsible for its spasmolytic properties.
Apigenin is a potent inhibitor of the CYP2C9 isoform of cytochrome P450, an enzyme responsible for the metabolism of many drugs. Furthermore, in the last decade, it has been discovered how apigenin can affect the activity of other enzymes.
According to some studies, this molecule would be able to carry out an anti-tumor action.

This was revealed, among others, by a study funded by the National Cancer Institute and the National Natural Science Foundation of China.
Research has shown that apigenin is very effective in fighting various types of cancer, including ovarian, pancreas, breast and lung cancer.
An extract of the compound was administered to rats that had previously developed chemotherapy-resistant tumors and at the end of the study the researchers found that apigenin had been effective in suppressing various types of metastasis.
Apigenin, together with caempferol is a natural inhibitor of the angiotensin converting enzyme (Angiotensin Converting Enzyme or ACE), target of the so-called ACE inhibitor drugs used in the current therapy of high blood pressure; in addition, like the flavonoid chrysin, it is capable of interfering with the enzymatic activity of isoform 1 of adenylate cyclase.