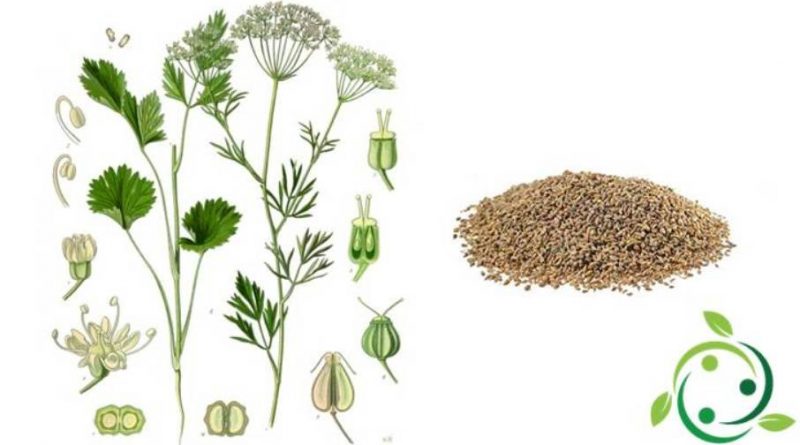 Common anise or green anise (Pimpinella anisum L.) is an aromatic plant from the Apiaceae family used as a spice.

Origins and History –
This plant originating in the Middle East, has been used since ancient times in the kitchen, pastry and liquor store, and soon arrived both in Greece and in Rome.
Pimpinella anisum is so widespread in Italy that it is considered a spontaneous species.
The Romans used it to flavor dishes based on chicken, pork, vegetables, and included it among the ingredients of a strongly spiced sweet ritual, probable ancestor of the wedding cake.
Discoride (1st century AD) reminds us that the Latins also attributed medicinal qualities to anise, including that of fighting impotence, of stimulating coitus, of awakening Venus, so much so that the term “anisum” is made go back to Greek terms meaning “to excite” or “to blaze”.
Pliny the Elder believed that Anise had the power to make people sleep and safeguard the youthfulness of the face.
From the Middle Ages the tonic properties of the plant found wide use among those who wanted to promote digestion after the sumptuous banquets.
In 1543 Fuchs wrote in his Novo Erbario:
“Anise seed makes the breath light and fragrant. Useful as a thirst quencher, it prevents stomach bloating. It makes women produce more milk, and stimulates lusting desire. This seed makes food a pleasure … “.
According to popular belief, if you wanted to give a woman an intoxicating love moment, you had to reduce the anise to powder, emulsify it in honey, and then apply the ointment on the skin of the two lovers.
With the seeds of this plant and those of iris they were even prepared odorous bags intended to perfume people and bedrooms.
It was during the nineteenth century that anise became the main ingredient of both a popular drink made with ice water, and absinthe, a liqueur so dear to artists and intellectuals.

Description –
Green anise is a herbaceous plant native to the East, but now cultivated almost everywhere (Asia, America, Europe), including Italy, where, as mentioned, it is considered spontaneous.
Well known as an aromatic plant, it is used in the preparation of liqueurs, but also for bread and sweets.
The fruits of this plant are used, called diakenes.

Properties and Uses –
Asanol, which is the prevailing essential oil of green anise, is used to produce liqueurs, medicines and flavors, generally used in pharmacies and patisseries.
The liqueurs include anisette, Greek ouzo, Turkish rakı or the more common Sambuca and Varnelli.
The therapeutic properties include carminative, spasmolytic, digestive, balsamic and stimulant properties.
Green anise facilitates digestive activities and limits meteorism, nausea and vomiting, also performs an antibacterial and expectorant action.
The spasmolytic and inhibiting properties of the intestinal fermentation processes attributed to green anise seem related to the ability to relax the smooth muscles of the intestine, while regulating motility at the same time.
It also has a mild anti-infective action on the intestine.
In general, green anise is suitable for people who have problems with the digestive system; precisely, as mentioned, to reduce intestinal bloating, belching and flatulence, as well as swelling sensations. It is also indicated for irritable colon and gaseous colic of newborns. It performs a therapeutic action similar to that of Fennel and for this reason the two remedies are sometimes administered together to increase their activity.
It is recommended during breastfeeding because it favors the milk froth and increases the amount of breast milk.
The most used formulations include the microencapsulated essential oil titrated in essence (minimum 8%), the daily dose of which varies from 6 to 8 mg per kg of body weight, to be taken about 30 minutes before the two main meals.
Side effects include occasional side reactions such as allergic manifestations to the skin, respiratory tract and gastrointestinal tract.
Anise is also not recommended for individuals with allergy to ethanol. Cases of contact dermatitis have occurred.
In addition, it is good to seek medical advice before taking it during pregnancy and breastfeeding.

Preparations –
The collection of the seeds of this plant must be carried out in the period of August-September, in the early hours of the morning when the dew prevents the fruits from falling, which are then dried in the air.
Once dried, they can be used whole or they can be ground: the powder obtained from the pleasant scent is used above all to flavor sweets or sweets, the seeds can be used to flavor bread and buns or for the production of liqueurs.
Among the various uses of anise, we remember those used in food where the whole or chopped preserved seeds are used to flavor bread, focaccia and also many sweets. It is also used for confetti. Green anise, as mentioned, has been used for the flavoring of various liqueurs for centuries.
In phytotherapy: it is an excellent regulator of digestion, but also a good antispasmodic and carminative, also performing expectorant action. It has sedative properties, even on the infant if taken during breastfeeding, finally manages to anticipate the delayed menstrual cycle and limits the troubles of menopause and prostate.
Daily use: chewing the anise seeds at the end of the meal helps digestion and above all perfumes the breath. It is in fact served in Asian countries following the spicy and often spicy lunch to refresh the breath.
In addition to liqueurs and sweets, you can also prepare excellent infusions based on green anise.