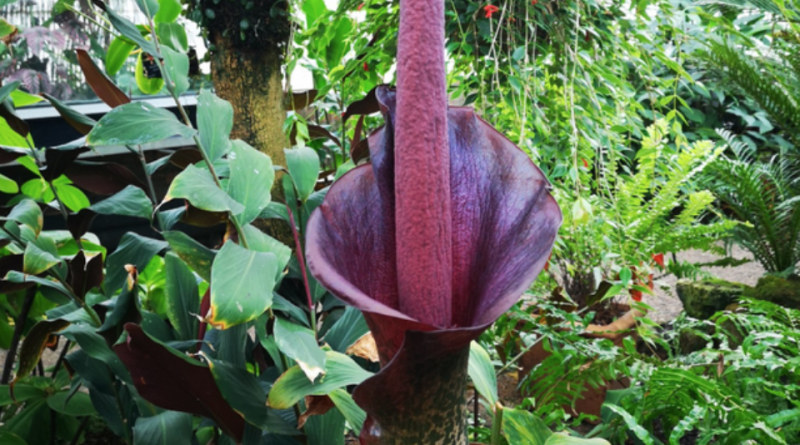 Geographical Distribution and Habitat –
Konjac is a plant native to Yunnan, a province located in southwest China, where the plant also grows in its natural state.
This plant is grown in China and in the subtropical hot areas of eastern Asia, from Japan and southern China to Indonesia. 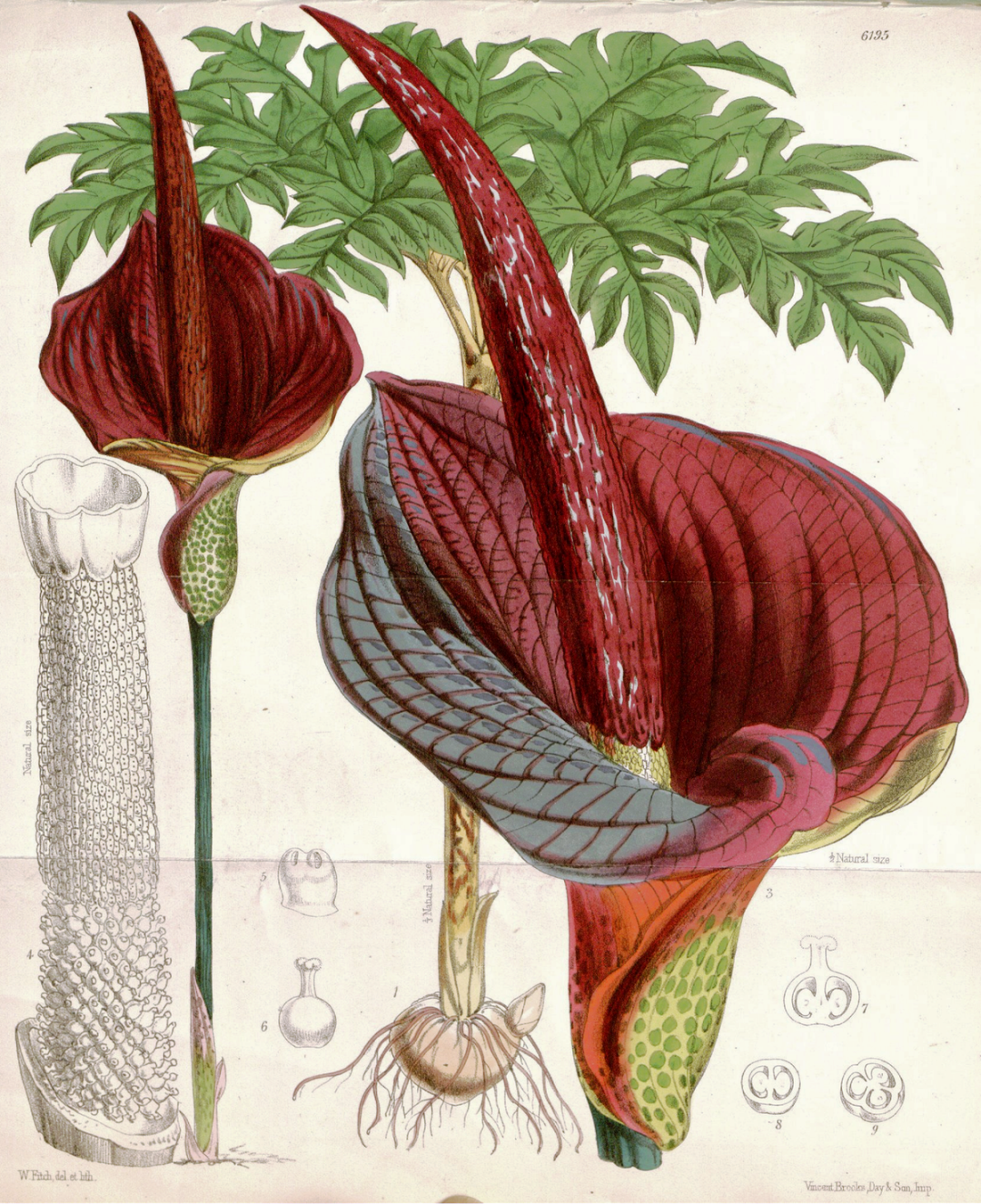 Description –
Amorphophallus konjac is a perennial herbaceous species that develops from a large tuberized rhizome that has the shape of a giant apple and can reach several kilos in weight and a diameter of up to 25 cm.
From its center, in the spring, an inflorescence even more than a meter and a half high that takes a few weeks to fully develop emerges: on a stem of the diameter of three to four centimeters is grafted a spadix of the same diameter dotted with many tiny flowers at the base, inconspicuous, and wrapped in a spathe that widens in the shape of a cone within a few days, with a color and consistency very similar to raw meat.
The leaf that surrounds the spadix is ​​up to 1.3 m wide, bipinnate and divided into numerous leaflets.
The flowers are produced on a spatula enclosed by a dark purple spadix up to 55 cm long.
The smell of this flower is that of rotting meat, with which the plant attracts insects that pollinate small flowers. Another detail certainly interesting because it is unusual is that the inflorescence emerges from the tuber without it being able to supply water and nutrients from the soil, because at this stage it is still devoid of roots.

Cultivation –
For the cultivation of Konjac, the rhizome-tuberized must be planted in early spring, or in the ground or even in a pot about 12 cm wider than the tuber itself, which can grow considerably in one season and must find room to expand, with the upper part about five centimeters from the surface, because the roots will develop from the top.
The substrate must be very rich in organic substances and nourishment (for example 50% of peat, 20% of earth and 30% of mature manure), to allow the rapid development of the plant. At this point you just have to water and wait.
From the ripe tuber, which is the size of a large grapefruit, the flower will emerge first. But since its development will cost the plant considerable energies that it will not be able to recover because it is, as already said, devoid of roots, the tuber will shrink considerably and therefore it will be better to recompact the soil around it and protect the plant from the strong wind so as not to overturn the flower.
Once this is wilted, the plant will begin to produce the roots and therefore it will be necessary to administer water to keep the soil moist, especially in the superficial part and taking care not to saturate the lower part too much.
After many weeks, the only leaf will start to emerge and at this point the amount of water will have to be increased and liquid fertilizer starts, at the beginning with nitrogen prevalence then, when the leaf is fully developed, potassium will prevail .
S recommends a bright exposure, from shaded to full sun, even if it is better to protect the plant from the strong sun. When the leaf withers in the autumn, it will be better to extract the tuber from the pot and keep it in a dry place, but it will also be possible to leave it in the pot outdoors, as long as the soil remains dry, and so it can bear even a few degrees below zero.
For cultivation in open ground it must be in areas where the winter frost is not too strong, in a protected, well-drained place, as dry as possible. However, the plant will grow more slowly than if repotted every year and the danger of rotting will always be present.

Uses and Traditions –
Konjac is a plant also known by the names of konyaku, konjak, konjaku, konjac potato, voodoo lily, devil’s tongue or elephant yam.
It is a plant known in Japan since the sixth century as a medicinal plant.
During the Edo period (starting in the early 17th century), the Japanese imported it from China.
The 1846 book Konnyaku Hyakusen “100 konnyaku recipes” already demonstrated its popularity in Japan at that time.
Today the Amorphophallus konjac is extensively cultivated in Japan (where it is called “Konyaku”), for its commercial use of the underground part, from which it derives a starch used for centuries in the Japanese dietary tradition.
The drug, that is the part of the plant with officinal properties, is made up of the root of the plant.
A purified glucomannan is extracted from the tuber of the konjac which consists of a polysaccharide, which cannot be assimilated by the human body, which has the ability to absorb a large amount of water, enormously increasing its volume and transforming into a fluid and viscous mucilage. It amalgamates with the food bolus during digestion, forming a non-digestible coating around the food particles, capable of incorporating sugars (carbohydrates) and fats (lipids), thus reducing their assimilation by the body. This phenomenon is favored by the acidic environment present inside the stomach. Its ingestion must always be accompanied by abundant quantities of water, 2-3 glasses, to avoid subocclusive phenomena at the esophageal level.
The action of Glucomannan is therefore mechanical-osmotic and non-pharmacological in nature, and can be summarized as follows:
– swelling in the stomach, Glucomannan reduces the stimulation of hunger, giving a feeling of satiety;
– during intestinal transit, in addition to water, it incorporates sugars and fats, including cholesterol, decreasing their assimilation by the body;
– in the large intestine it incorporates harmful flora and toxins and, due to its volume, presses on the enteric walls, exercising a sort of massage that stimulates peristalsis, promoting intestinal transit and facilitating evacuation.
Glucomannan is indicated as an adjuvant in the treatment of overweight, obesity and constipation, of metabolic diseases such as hypercholesterolemia and hyperlipidemia; of hyper-glycaemia in non-insulin-dependent type 2 diabetes, since the slow and reduced absorption of carbohydrates helps to level post-prandial glycemic peaks, thus avoiding the sudden and abnormal increase in insulin, and therefore limiting lipogenesis and early return of hunger.
Since it has no side effects, as it is not absorbed and therefore does not produce systemic effects, it is also suitable in childhood obesity from 10-12 years, having the foresight to make a few days off after each month of administration, for avoid phenomena of reduced vitamin-mineral absorption in a growing organism.
As for contraindications or precautions, remember that glucomannan is contraindicated in case of hiatal hernia, since the increase in volume in the stomach could accentuate its symptoms.
As is the case with many fiber-rich products, it can cause meteorism, especially in the initial phase, which usually decrease after a few days.
It can also reduce the absorption of the drugs administered simultaneously, therefore we recommend taking them at least an hour before Glucomannan, or three hours after its ingestion.
Konjac is almost calorie-free and high in fiber; further reason for its use as a dietetic food. In Korea it is also used as a face massage cream.
Konjac is also used to prepare fruit jellies; this type of snack, packed in plastic cups, is well known in Japan and in the United States of America.
Unlike the other jellies, Konyaku has an almost solid consistency and does not melt immediately in the mouth; for this reason, it is highly recommended to chew it very well before swallowing it, as otherwise there have been several deaths especially of children.

Method of Preparation –
The food produced by the corm of this plant is widely known in English by its Japanese name, konnyaku (yam cake), cooked and consumed mainly in Japan and Korea. The two basic types of cake are white and black.
In Japanese cuisine, konyaku is produced by mixing konjac flour with water or lime water; it is the ingredient of many dishes and specialties such as oden, sukiyaki, gyūdon and shirataki spaghetti. In addition, it is used by vegetarians as a substitute for animal gelatin. The konnyaku intended for sale in food stores is packaged in plastic bags containing water, and has the appearance of a gray block with the consistency of a firm jelly.
Furthermore, as mentioned, the konjac corm contains glucomannan, a natural vegetable gum used in some types of chewing gum.