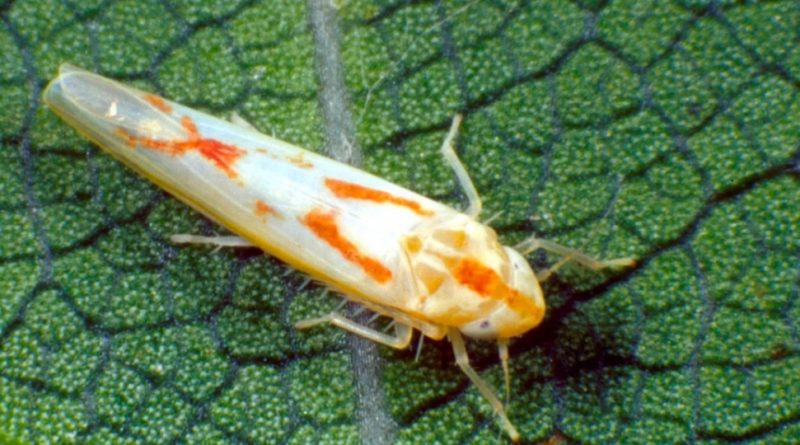 The yellow vine buzzer (Zygina rhamni Ferrari, 1882) is a small insect belonging to the Cicadellidae family.

Geographical Distribution and Habitat –
The yellow buzzer of the vine is an insect widespread in many European countries with an established presence in Bulgaria, Cyprus, the Czech Republic, some areas of Turkey, France, Hungary, Italy, Yugoslavia and Switzerland. It is also present in many areas of the Near East.
This species lives at the expense of plants such as: Vine, Bramble, Forest and landscape deciduous trees (Ash, Oak, Maple, Hornbeam and others).

Morphology –
The yellow buzzer of the vine, in the adult state, is a small insect (about 3 mm), yellow-ocher with reddish bands, in the summer form, more evident in the males, on the chest and on the front wings, in the wintering form .
The nymphs and nymphs are instead of yellowish-white color, with the presence of long filiform antennae.

Aptitude and biological cycle –
The Zygina rhamni overwinters as an adult in natural refuges, such as hedges, or in some of the aforementioned host plants.
The cycle of this insect is optional heteroic as it winters as a female fertilized on secondary hosts, in particular on brambles and roses, on which it lays eggs starting from January, after which it is able to return to the primary host, which is the vine, in the following spring (approximately in May).
On the vine, the wintering females, together with the first generation females, which developed during the spring on bramble and rose, lay in the leaf veins. The incubation period is about 15 days, juvenile forms are born; preimaginal development lasts on average 20 – 25 days.
The insect, in all stages, remains on the lower page of the leaves, preferring the areas where the vegetation is more dense to prick the cells of the leaf mesophyll by emptying them (plasmomiza feeding).
Subsequently it completes two further generations on the vine whose adults appear respectively in June and between July and August; also in the central and southern regions it is possible to have a third generation towards the end of summer. The adults starting from the month of August begin to leave the vineyard, to go to secondary (brambles and roses) and temporary host plants (oaks, elms, hornbeams, alders). Finally, starting from the month of December the whole population focuses exclusively on winter guests where the mating takes place. The wintering populations will consist almost exclusively of females.
The insect can therefore make three generations, with the first in June, the second in July and the third in September.

Ecological role –
The yellow buzzer of the vine, with its punctures on the lower page, empties the cells and determines the appearance, on the upper leaf page, of whitish – silvery spots scattered on the same flap.
In this way, the attached leaves show chromatic alterations, necrosis, anticipated phylloptosis and evident damage on production.
The fight against Zygina rhamni, if necessary, must be carried out with targeted chemical interventions, following the principles of the guided fight.
To this end, the presence of its natural enemies must be ascertained in advance, including some parasitoid Hymenoptera and some predatory Antocoridae Rincoti.
A leaf sampling must first be carried out, with the intervention threshold being around 2 nymphs or other mobile forms per leaf.
It should also be borne in mind that the treatments often coincide, especially the summer ones against the second generation, with others carried out against the summer phytophagous species such as the other Cicaline and Tignole.