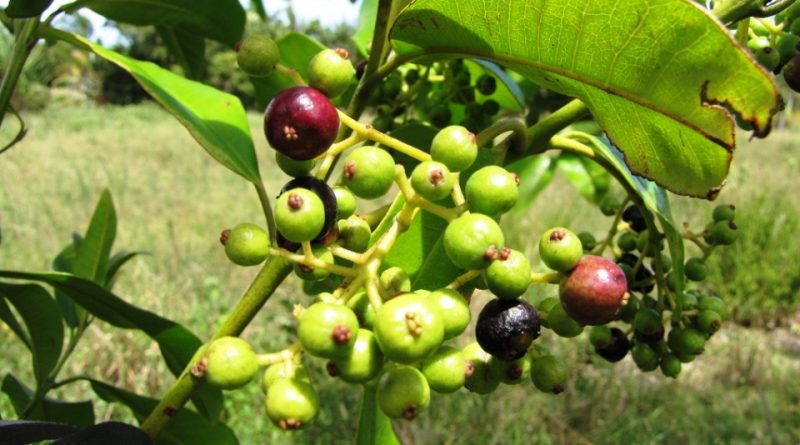 The allspice (Pimenta dioica (L.) Merr.) Is an evergreen tree species belonging to the Myrtaceae family.

Systematic –
From a systematic point of view, it belongs to the Eukaryota Domain, Plantae Kingdom, Magnoliophyta Division, Magnoliopsida Class, Myrtales Order, Myrtaceae Family and therefore to the Pimenta Genus and the P. dioica Species.

Etymology –
The term Pimenta comes from the ancient Portuguese pimenta, in turn from the Latin pigmenta, form of pigment, from pingō I paint.
The specific dioecious epithet comes from the Greek δις dis twice and οἰκία oikía habitation: dioecious, because male and female flowers are brought from different plants.

Geographical Distribution and Habitat –
Pimenta dioica is a plant native to Central America where it is found in an area that mainly includes Costa Rica, Nicaragua, Honduras, Belize, Guatemala, Mexico and the Caribbean: Jamaica, Dominican Republic, Cuba.
Its habitat is that of the plains or wooded hills and wet savannas, where it usually grows on limestone soils, at altitudes up to 350 meters above sea level. 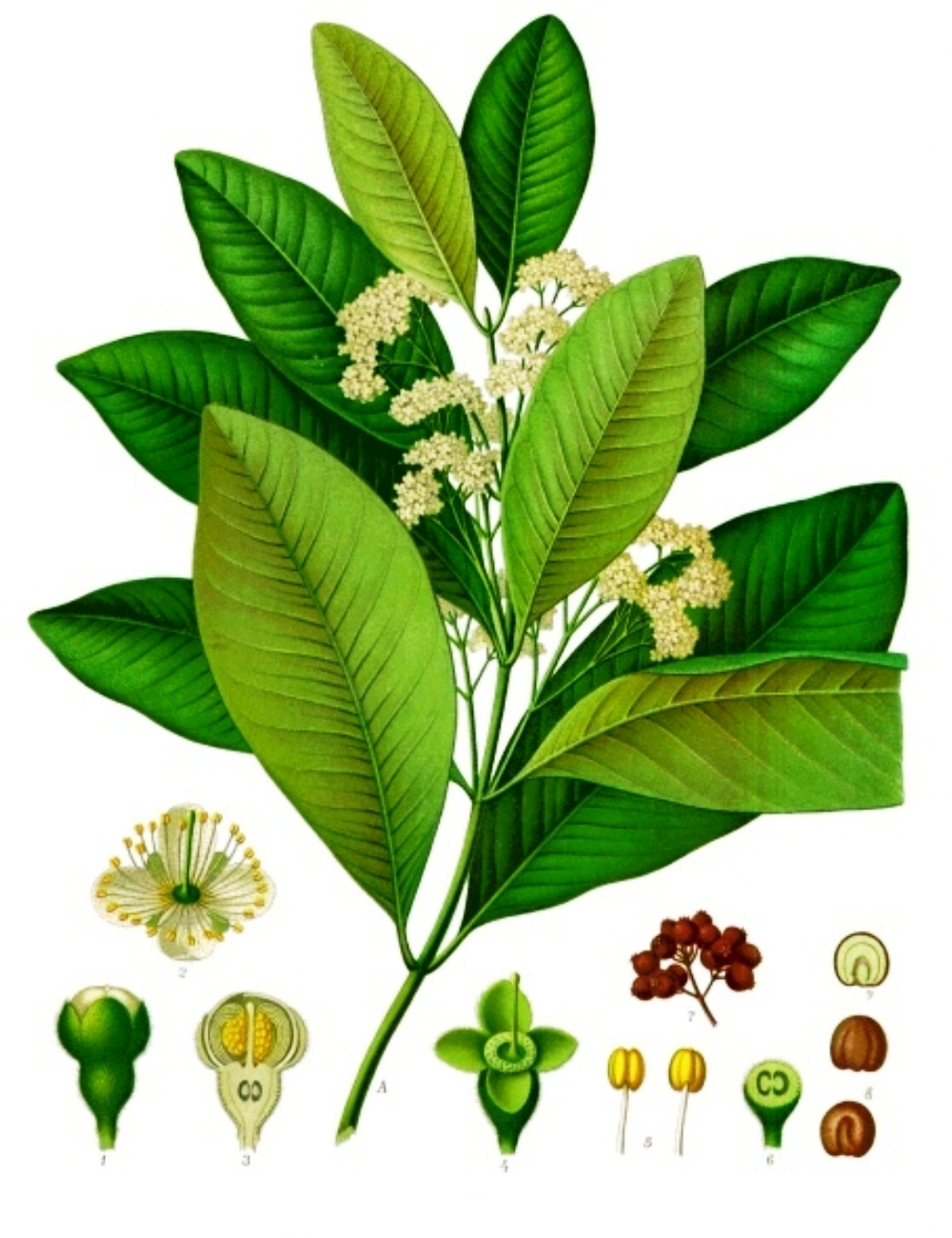 Description –
Allspice is an aromatic, evergreen tree, with large branches that normally grows between 7-10 meters in height but which, occasionally, can reach 20 meters.
The trunk can have a diameter of up to 30 cm.
The leaves are ovate lanceolate, darker green on the upper page.
The flowers are small, whitish in color, gathered in inflorescences that depart at the base of the leaves, with male and female flowers brought from different plants.
The antesis occurs in the summer.
The fruits are small berries (but larger than the actual pepper) which are green at first and reddish-brown when ripe.

Cultivation –
For the cultivation of this plant it is remembered that it is a tree with slow growth rate.
Typical tree of humid tropical areas where it is grown at altitudes below 330 meters but which can be grown up to 1,500 meters.
It prefers areas where annual daytime temperatures are between 15 and 32 ° C, although it can tolerate temperatures between 10 and 35 ° C.
The plant prefers an average annual rainfall between 1,500 and 2,500 mm, but tolerates oscillations between 1,000 and 3,500 mm.
From a pedological point of view, it prefers a rich and well-drained sandy soil and sunny positions, with a pH that remains in the range 7 – 7.5, tolerating oscillations between 6.3 and 8.
Once implanted, if propagated by seed, it takes many years to bloom; trees can go into production between 5 and 10 years, but take 20 – 25 years to go into full production. Obviously the time of entry into production for plants obtained from cuttings is obviously shorter.
The useful economic life of the plant is about 50 years.
Already in the period between 10 and 15 years they can produce, in favorable years, 23-60 kg of green allspice berries in a good year, even if the average yields are around 5 kilos per tree.
Plants can be harvested every three years and berries and leaves are usually not harvested from the same tree.
Pollination is entomophilic by bees.

Uses and Traditions –
Pimento was so called because it was originally mistaken for pepper, as the berries are very similar, even if those of the pimento are larger.
In Europe it is also known as Jamaican pepper.
The dried berries have a size of about 6 mm in diameter, very similar to the peppercorns but the difference compared to them is due to the presence of no less than 2 seeds.
Once dried in the sun, the berries must be finely ground.
Pimento is one of the most used spices in the preparation of numerous dishes in Mexico and other states, especially in Central America.
The peculiarity of the allspice lies in the aroma, characterized by a flavor reminiscent of the mixture of pepper, nutmeg, cinnamon and cloves. A real mix that gives a particularly pronounced taste. Allspice is one of the most used ingredients in Caribbean cuisine, such as jerk.
In Europe, however, it is mainly used in the agro-food industry. This spice occupies an important place in the culinary world; in fact it is used to spice dried or smoked meat, to make sauces like curry and to flavor many dishes.
It is also used to prepare a typical Jamaican rum and can also be found in various dessert recipes.
In addition to food uses, Pimenta dioica is appreciated for its medical properties as it has analgesic, antiseptic and digestive properties. This spice is able to stimulate the secretions of enzymes in the stomach, facilitating digestion. In addition, it is known that its oil reduces intestinal colic and reduces gastric pain.
It is considered a good digestive and carminative and is effective against muscle pain and sprains, performing an anesthetic and warming action, similar to Cloves.
Some studies have confirmed a beneficial active ingredient on general inflammatory stages: it serves to soothe, for example, toothache, and finally it is considered a powerful tonic. The use of allspice in natural medicine has very ancient origins and resides in the South American popular belief that considered it a real cure-all for health.
Allspice is often combined with herbs that have a tonic or laxative effect.
For external use it is used to treat chest infections, muscle or other pains.
The essential oil is carminative and antioxidant and is used to relieve the pain of toothache.
In addition, the powdered berries are added to other medicines to mask unpleasant flavors.
Allspice berries contain about 4% of essential oils (of which about 80% are eugenol), proteins, lipids, vitamins A, B1, B2 and C, as well as minerals, such as: potassium, manganese, selenium, iron , magnesium, water, sodium, carbohydrates, proteins, phosphorus, fibers. The richness of its minerals makes it an excellent element that can be included in a balanced diet.
Other uses are those related to the preparation of many male bath products, such as shower gel or soaps that contain traces of this pepper.
Pimenta dioica is a plant that was used as a spice in the Caribbean before the arrival of Europeans. It subsequently became a popular spice in many areas of the world and is now often grown in the American tropics, especially Jamaica, and occasionally elsewhere.
It was Christopher Columbus who brought the allspice to Spain from the Caribbean thinking it was pepper; actually allspice berries resemble large pepper berries. Before the Second World War, allspice was fairly used, but during the war several trees were cut down and production collapsed; wild trees are nowadays quite rare. In Eastern Europe, however, it is still widely used, for example in Poland, where it is a spice used daily.
In the 18th century allspice was used as a deodorant; for example, Russian soldiers used to put some allspice berries in their boots.
In addition to the berries, the leaves are also used as a seasoning or soaked to prepare a tea.
As for other uses, an essential oil obtained from the leaves, is used to flavor a wide range of foods, including baked goods, candies and chewing gum. The same essential oil is used in perfumery, especially in oriental fragrances, and in aftershave lotions.
The varieties grown in the West Indies have smaller fruits that contain more than double the essential oil compared to those of Central America.
Finally the characteristics of the wood of this plant, whose heartwood is reddish brown in color, with sapwood of a lighter color. The wood is of medium gloss, hard and fine-grained, very hard and heavy.
This plant is mainly grown in Jamaica, but it is present in production places such as Guatemala, Honduras and Mexico.

Method of Preparation –
Allspice is one of the main ingredients of Caribbean cuisine. It is used to spice dried or smoked meat, in many sauces of Mexican cuisine and for storing food in a sort of brine called pickling.
This spice is also one of the ingredients that can be found in the curry.
It is also used in many Middle Eastern countries; for example, Palestinian cuisine uses allspice to flavor many of its dishes.
In the United States it is used mainly in desserts, but it is one of the main ingredients of the Cincinnati chili. It is commonly used in Britain for many recipes, for example in pancakes. It is also used in Creole: a mixture of white pepper, black pepper, green pepper, pink pepper and allspice.
For years, moreover, allspice has been the ingredient in many highly sought after cocktails and soft drinks. It lends itself well to rum-based preparations – both white rum and spiced rum – and is well accompanied by lime and angostura.
In non-alcoholic drinks the is added in fruit-based preparations and extracts thanks to its typical aroma which combines, as mentioned, that of cloves, nutmeg and cinnamon.