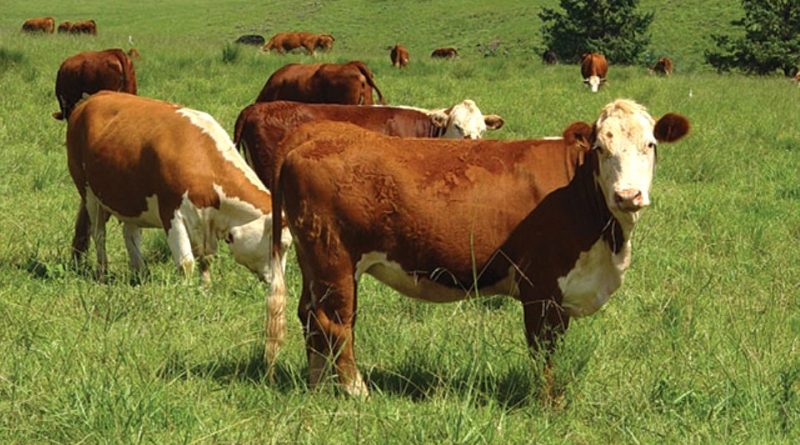 Hereford is a bovine breed (Bos taurus Linnaeus, 1758) originally from Herfordshire, England, with an aptitude for meat production.

Geographical and Area Distribution –
Hereford is a very common breed of cattle that is bred, as well as in its homeland of origin, England, in the United States, Canada, Mexico, South America (where it is widespread in Argentina) but also in Israel, Japan, and throughout Eurasia, Australia, New Zealand and African countries (especially in South Africa, Zambia and Zimbabwe).
Currently there are more than five million pedigrees of Hereford cattle now exist in over 50 countries.

Origins and History –
The Hereford is a breed native to Herfordshire, a county of England in the West Midlands region, from where it spread worldwide.
Historically, the exportation of the Hereford cattle breed started from the United Kingdom in 1817, to the United States, above all Kentucky, from where it ended up spreading, as well as throughout the United States, in Canada and, through Mexico, to the large countries of South America. . Today, Hereford cattle dominate the world scene from Australasia to the Russian steppes and, as mentioned, in many other countries.
This breed, although coming from a colder region, such as England, soon found great popularity especially in the southwestern United States, testimony to the solidity of the breed.
The World Hereford Council is headquartered in the United Kingdom and currently encompasses 17 member countries with 20 Hereford companies and 10 non-member countries, with a total of eight companies.

Morphology –
The Hereford is a breed that is recognized for having a more or less laden red coat with a white head.
It also has white patches on the throat, dewlap, belly, neck-withers-back.
The muzzle is pink depigmented.
They are animals of basically reduced stature, with a height at the withers of around 135 cm, but massive, with a live weight of the females of 800 Kg and of the males of 1200 – 1300 Kg.
The skeleton is light and covered with large muscle masses.
The limbs are short and thin.
The horns are present but short, yellowish in color, oriented forward and downward, but there are acorns (in the American stock).

Productive attitude –
Hereford is a bovine breed particularly suitable for grazing, both for rusticity and robustness and resistance to many infectious and parasitic diseases. It is one of the most important meat breeds in the world (in the USA it is one of the most represented meat breeds). In Italy it is not bred.
It has fast increases in meat and has good fertility and longevity, with very few birth problems.
Meat production is abundant and of excellent quality (often with excessive presence of fat).
It should be noted that compared to the original English Herford breed, the cosmopolitan one, in addition to presenting some acorns, is much earlier and more productive.