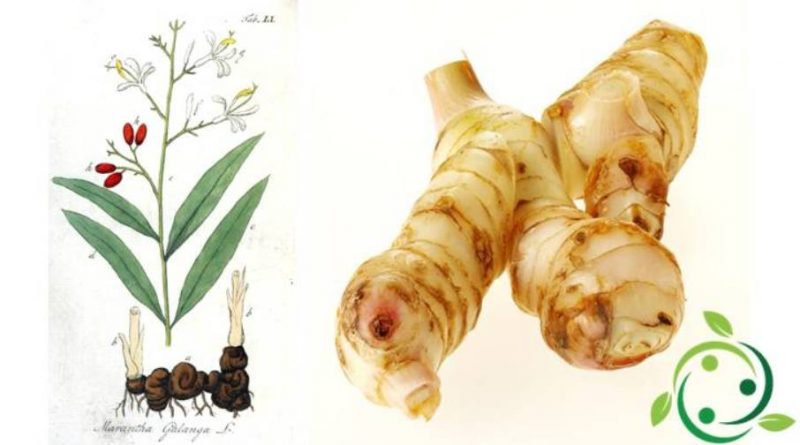 Origins and History –
The Latin name Alpinia was given to the plant by Linnaeus to commemorate Prospero Alpini, an Italian botanist who lived between the sixteenth and seventeenth centuries, who cataloged and described numerous plants and was the first to understand the sexual difference between plants.
The word galangal is a distortion of the Arabic word Khalanjan which in turn derives from the Chinese term Liangtiang (sweet ginger).
It seems that fumigations were being prepared in ancient Egypt, while for the introduction into Europe we have to wait for the Middle Ages, where a very popular spiced liqueur appears among the ingredients of Hippocrassis.
Saint Hildegard of Bingen, famous for her studies on herbs and spices, in the tenth century, defined galangal as “the spice of life and used it in many of her herbal preparations to heal many ailments: from heartache and heartache. of stomach to deafness.
In the thirteenth and fourteenth centuries, the galangal was used by the Turks to make tea and the Arabs used it as a stimulant for horses. Even today, in Russia, long dominated by the Turks, it is used to make vinegar and liqueurs.
In ancient times, moreover, the plant was widely used also for its aphrodisiac effects and for its relaxing action thanks to its aromatic qualities.

Description –
Galangal is obtained from the root of both Alpinia officinarum and Alpinia Galanga.
The edible part is the rhizomatous root, which must be peeled and then crushed; on the market it is also dried or powdered.

Active principles –
Galangal is a root with minimal nutritional properties, which is why it is generally used in small quantities only to flavor dishes.
A spoonful of cooked galangal contains only 5 calories but obviously contains appreciable quantities of fiber, vitamins and minerals.
The active ingredients of galangal root are represented by volatile oil and resin.
The volatile oils contained in this plant are in general, as for aromatic herbs, they give a particular perfume and also represent the key to some chemical benefits related to the intake of galangal.
This contains a quantity of volatile oils which varies from a concentration of 0.5% to 1%. There are also numerous active chemicals, including: sequiterpenes, eugenol and also a mixture of chemicals including: cineol, cardinene isomers and galangine, which is in other words an antioxidant enzyme.

Properties and Uses –
Galangal boasts numerous properties, both food and therapeutic and can be considered an alternative to ginger, of which it shares the belonging to the same family, for its pungent flavor.
Antifungal properties have been detected, although they have not yet been officially tested to allow their use of galangal as an antifungal.
Other ingredients are offered in it which are classified as aromatic, carminative, diaphoretic and stomachic, that is, with positive properties for the digestive system. On the other hand, tonic and antibacterial properties are noted, which are exploited in veterinary medicine and also in homeopathic medicine. Specifically, these properties are excellent for solving problems such as fungal infections, pain in the joints and muscles, in other words rheumatism.
In some popular applications, galangal is used to treat symptoms such as stomach pain and decreased appetite.
Historically, galangal has been used as well as ginger, in treatments of nausea and excessive presence of gas in the stomach. Still, other uses of the plant are found in the case in which the blood pressure levels must be lowered or on the contrary the quantities and motility of the spermatozoa must be increased. An important benefit is that galangal, according to some studies still under development, proves to be a valid tool in the fight against cancer and specifically as regards the fight against lung and breast cancer. The antioxidant properties of this plant make it effective in this regard. The beneficial action has been observed for both the major and minor galangal. The experiments have precisely revealed that thanks to the use of galangal, cancer cells can be killed and at the same time protection is guaranteed to healthy cells, which in this way do not risk being attacked and becoming cancerous.
The use of galangal in the fight against this disease promises truly surprising results, however the use is not yet recommended by doctors since it is possible that unpleasant side effects are incurred, therefore the results of new research in this direction are expected .
In India it is used as a body deodorant.
The root is the edible part of the galangal. This is widely used as a condiment in the kitchen, especially in the Asian and Middle Eastern tradition, although in reality the galangal is closely linked to the Thai tradition. It is used, in particular, in the kitchen for the preparation of typical Indonesian dishes and in any case it is always possible to replace the curry with the galangal. Its use is excellent for enriching fish dishes, but also soups, sauces, chicken, red meat and vegetables. Galangal can be found in frozen form or otherwise in powder or dry form. For use in the kitchen, the major galangal (Alpinia galanga) is chosen, which is the most widely distributed type. The galangal minor (Alpinia officinalis) is instead, mostly limited to the markets of South East Asia, where it is used for the preparation of more sophisticated recipes. In both cases, the quantity adopted is variable.
From the galangal root it is possible to extract the relative oil, following a distillation process in water. In addition to culinary purposes, galangal is also used for medical use, and in particular it is famous in Chinese medicine. It is used against nausea, flatulence, dyspepsia, rheumatism, phlegm and enteritis.
An interesting use of galangal can be as a food additive in the preservation of food and specifically for that of meat: with the use of galangal it is possible to obtain a better and prolonged duration of oxidative stability of minced meat.
As for contraindications, no official studies have been carried out on the uses of galangal, therefore if you wish to make use of it for medical purposes it is best to first inquire adequately with a doctor or an expert.

Preparations –
When using galangal in the kitchen, it is recommended to peel, cut into small pieces and crush the root to release the aroma. A slice of root is equivalent to half a tablespoon of powder. This goes well with ginger and lemon grass or white pepper.
Galangal is appreciated above all for the sweetness which is counterpointed by a pungent aftertaste, largely similar to ginger. The aroma is fruity, with vanilla tones. It often appears among the spices with which curry is made. In Thai and Indonesian delicatessens it is widely used for flavoring and flavoring fish, meats and soups (the famous Thai chicken soup), generally together with garlic, lemon, chilli or white pepper.
It is also used to give a particular flavor to risotto or legume-based preparations. It is perfect for herbal teas and decoctions, adding freshness and floral aroma to the benefits normally recognized for ginger.
A possible alternative is to consume galangal, making a tea. For the preparation just add 0.5 grams, maximum 1 gram of dried galangal, together with a small dose of rhizome, in boiling water. Leave the tea to brew for a maximum of 5 or 10 minutes and then you can filter the tea and consume it 30 minutes before meals. The tea thus prepared can be consumed even three times a day.