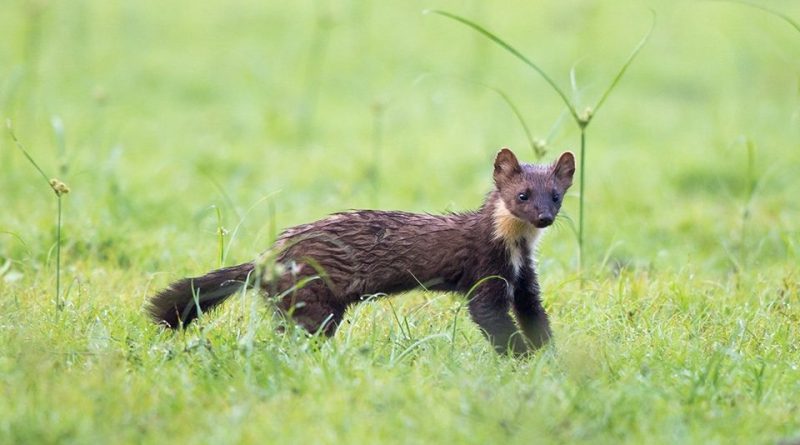 The beech marten (Martes foina Erxleben, 1777) is a mammal belonging to the Mustelidae family.

Geographical Distribution and Habitat –
Martes foina is a mammal, which with its various subspecies, is widespread throughout Europe with the exception of Great Britain and the northernmost regions. Outside Europe, it is located in Central Asia.
In Italy it is present almost throughout the territory except for Sicily and Sardega and the smaller islands.
Its habitat is very varied so that this mammal frequents a great variety of environments, from the plains up to 2000 m in height, where it prefers forest or wooded areas and is also common in anthropized areas, where it adapts to peripheral and rural areas human settlements, while carefully avoiding large open spaces. 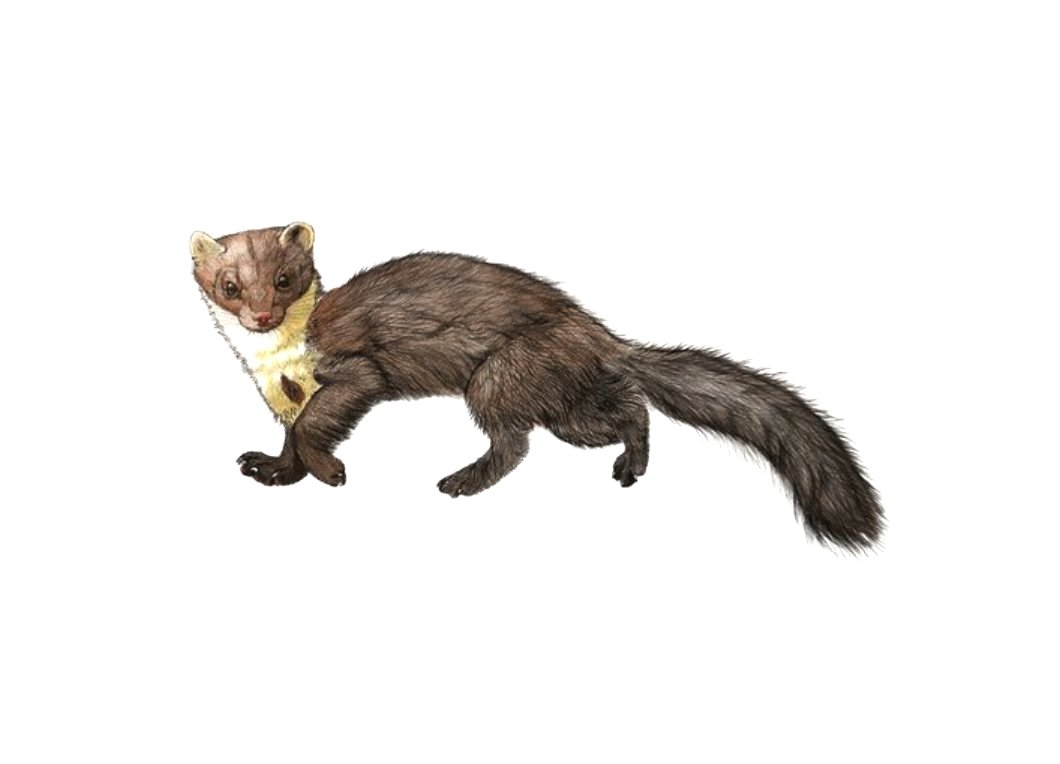 Description –
Beech marten is a medium-sized mammal with a head-body length of 42-47cm, with a long tail 23-26cm, shoulder height 12cm, for a weight ranging between 1.3 and 2.3 kg; among other things, the study of the fossil remains of this species has highlighted a gradual but constant decrease in size during its evolution.
Similar to the Marten, this mammal, however, presents the fur more grayish in color with the presence of a spot on the neck and on the white throat or, in some cases light yellow, divided into two parts.
The hair is short and thick with light brown dorsal coloring, with a tendency to lighten on the muzzle, forehead and cheeks.
Its ears are rounded and edged in white, while the legs have dark brown “socks”.

Biology –
The breeding season of the marten takes place during the summer, between July and August. During this period the animals lose their marked territoriality and can also be seen during the day, while during the night their plaintive call for mating is heard.
During this period, males tend to increase the extent of their territory and mate with all females whose territory partially overlaps with their own.
The mating phase occurs after a series of skirmishes during which the female responds aggressively to the male’s approaches, which emits subdued calls and finally mounts it by biting it on the sides of the neck, where there are deposits of subcutaneous fat.
The gestation period lasts about eight months, after which 3- 5 puppies are born. Such a long lapse is due to the fact that the implantation of the fertilized egg takes place in the spring of the year following mating and the embryo begins to develop from February.
The weaning of the young, who are blind for the first 30-40 days, takes place around two months of life which, however, achieve complete independence, however, not before the year, while sexual maturity is reached between 15 months and two years and a half.
The marten has a life expectancy that is 5-10 years, in its natural state, and even up to twenty years in captivity.

Ecological role –
The beech marten is an animal with nocturnal and solitary habits, or in small nuclei, which disintegrate after training the puppies.
Its shelters are represented by cavities or ravines sheltered in ancient ruins, in barns, in stables, in stony grounds, among stacks of wood or in the natural cavities of the rocks, from which it comes out at sunset or at night.
The territory of competence can range from 15,000 m2 to 210,000 m2, with dimensions related to sex (greater for males) and season (with decrease in the winter period).
Among mammals it is one of the most aggressive species: in cases of abundance it is content to suck the blood to its prey by attaching them to the neck or throat.
This animal, especially during the gregarious phase, is able to develop group hunting techniques to the detriment of small poultry farms.
It is an animal with a tendency to omnivorous feeding, which feeds on honey (it is immune to bee and wasp stings), berries, eggs (of which it affects the shell with the canines and then sucks out the contents), and small animals, even if it is meat is the predominant component of its diet.
Food is mainly sought on the ground but it is an animal with great climbing abilities, so much so that it is able to feed on berries, fruits, eggs and bird nestlings. To grab larger prey such as pheasants and rats, the marten shows great patience, lurking for hours in the places where these animals usually pass. As soon as the prey arrives, the marten leaps at her lightning, landing it and finishing it with a bite to the throat.
The presence of this mammal in areas where humans are present can cause some damage. These are related to his research activity of nests, nestlings and bats; in these operations it tends to damage the roofs of houses by moving the tiles, it also has the tendency to put cars out of use by chewing their rubber pipes.
Furthermore, if this animal enters a chicken coop or a rabbit hutch, it often kills a number of animals much greater than its immediate food needs: this behavior, common in other Mustelids, is called “surplus killing”, which has generated the belief popular that the marten feeds mainly, or even exclusively, on the blood of its prey.
Due to the damage it can cause, the marten is subject to illegal withdrawal by humans through the use of poisons, laces and traps.
This species is also listed in Appendix III of the Bern Convention. The marten cannot be hunted in Italy (Law 157/92) and is included among the species protected by the Bern Convention (Annex II). It is present in numerous protected areas.