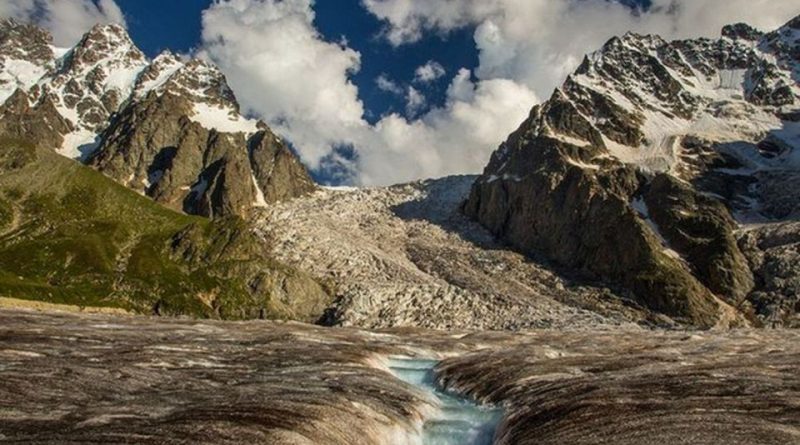 The Alania National Park (in Russian Национальный парк “Ала́ния”) is a protected area of ​​Russia which extends for a total area of ​​about 549 km².
The Alania National Park was established by decree of the Government of the Russian Federation no. 225 of 18/02/1998, in the Irafsky district of the Republic of North Ossetia-Alania, in order to preserve unique natural complexes, use them for environmental, educational, scientific and cultural purposes, to create conditions for the development of organized tourism.
The Alania National Park is located in a mountainous area, covered by some glaciers, in the central Caucasus.
This protected area is located in the Iraf rajon area of ​​the Republic of North Ossetia-Alania.
The park was established to preserve the significant biodiversity present, within which rare species exist, such as the goat of the Western Caucasus; in addition, the institution allows to protect a very important area also from a cultural point of view and potentially appetite from recreational tourism.
This area is in fact home to ancient civilizations which today are witnessed by numerous archaeological remains, such as the culture of Koban, who lived here during the Bronze Age (1200-300 BC), and the Alani (100 BC-1234 AD) from which derives the name of the region.
Alania National Park is located two thirds of the distance between the Black Sea in the west and the Caspian Sea in the east. The southern boundary of the park, on the top of the mountain range, runs along the border with Georgia. It borders on both sides with other protected areas: the Cabardino-Balkaria nature reserve in the west (another high mountain park) and the North Ossetia reserve in the east.
From a morphological point of view, the park is characterized by significant altimetric variations; in fact, the altitude varies from 4646 meters of Mount Uilpata to 800 meters of the valley of the Uruch river below.
Much of the park’s surface is covered by glaciers, bare rock and scree, located mostly in the higher areas. Lower down to medium altitudes, about 20% of the park is covered with forest. At lower altitudes, and in the valleys to the north, there are grassy expanses and sporadic groves.
The hydrographic network of the park is mainly fed by glaciers. There are over 70 rivers and streams. Even the few lakes are small in size and are also fed by glaciers and in the spring by the melting of the snow.
In the park there are also mineral springs in the highest valleys, waterfalls and clearings in the forests.
The park’s main river is the Uruch, fed by the Karaugom glacier and by the numerous smaller glaciers that depart from the latter.
Unfortunately, a recent study in the Central Caucasus found a temperature rise of 0.05 ° C per year and an average retreat of the glacier front of 8 meters per year, which worries the entire ecosystem .
Inside the Alania National Park the climate is characterized by the humid continental type, with long snowy winters and short and cool summers. 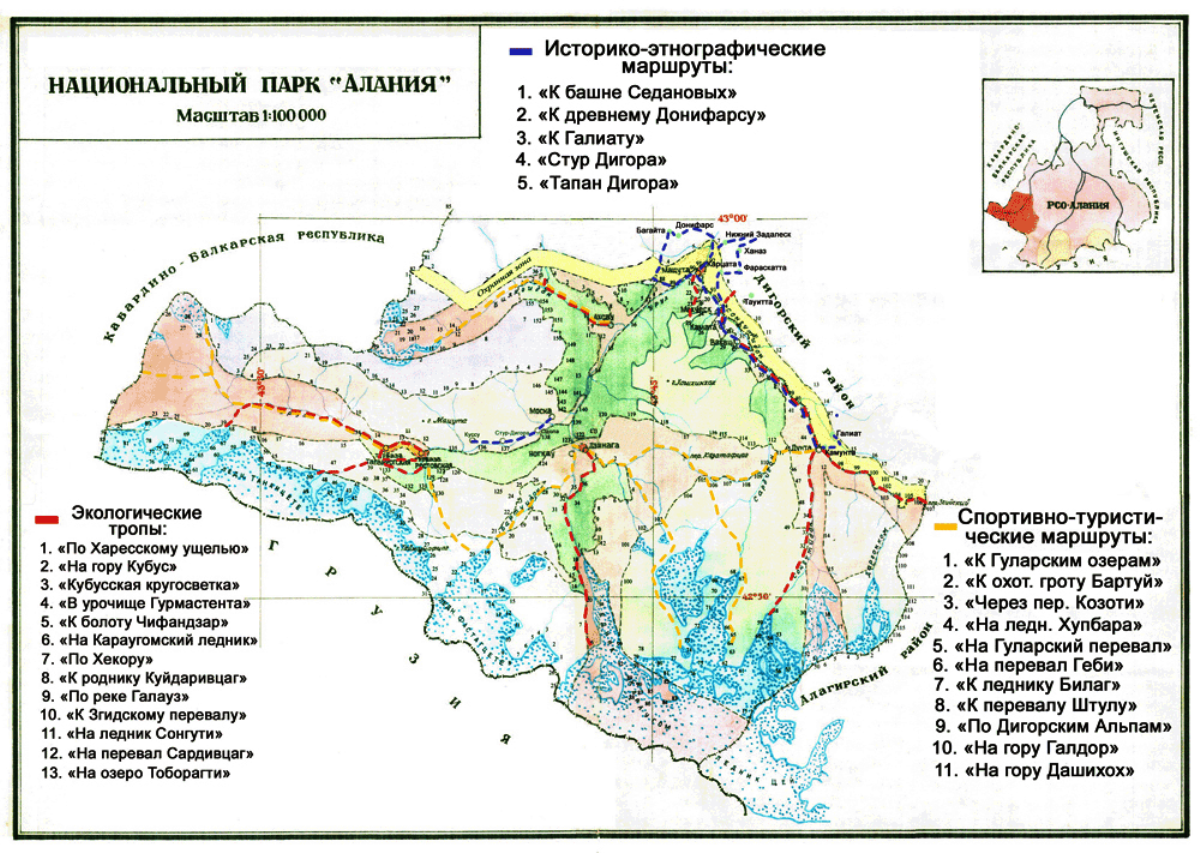 Flora –
Inside the park there is a flora greatly influenced by the altimetric variable. At higher areas, above 1800 meters, the vegetation is alpine and subalpine. At medium altitudes, about 20% of the park is covered with forests, with pines, rhododendrons, yellow birches, junipers and wild roses among the most common species. At lower altitudes, and in the northern valleys, we find grasslands and plant species typical of the coastal plain areas.
We underline that inside the park there are more than 1000 species of plants, including 200 endemic to the Caucasus region.
Also worthy of note, as above the level of the valley of the Haresskogouschelya river, at 2400 meters, is the “swamp of Chifandzar”. It is a peat bog that covers an area of ​​about 3 hectares, dominated by sphagnum, sedges and flowers typical of the higher latitudes, such as the golden ranunculus. With a depth of 3 meters, Chifandzar is thought to be about 5000 years old.

Fauna –
The fauna of this area is important and includes numerous species of mammals and birds.
The mammals of the park are those typical of the wooded areas of the northern slope of the Caucasus, with 34 species including wolves, jackals, chamois, lynx and foxes, as well as a species close to threat, the goat of the Western Caucasus.
The entire Alania national park has been designated as an Important Bird and Biodiversity Area (IBA) by Birdlife International. The reason is related to the presence of vulnerable species such as the bearded vulture and the black grouse of the Caucasus. 116 species of birds live in the park, of which 42 reproduce here.
The only species of fish that lives in the streams of Alania is the brook trout. Of the five reptiles in the park, the steppe viper is noteworthy.