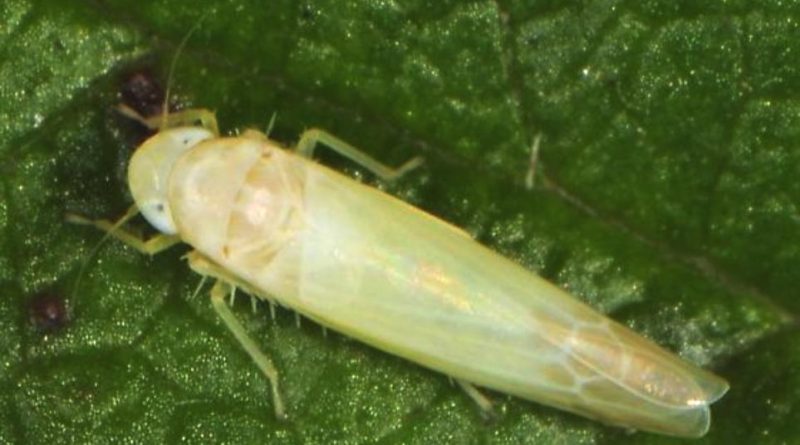 The rose leafhopper (Edwardsiana rosae L.) is a small insect belonging to the Cicadellidae family.

Geographical Distribution and Habitat –
The rose leafhopper is a very common insect on a planetary level and is an extremely polyphagous phytophagus that attacks rosaceae, as well as hawthorn and rowanberry, and also other ornamental plants.

Morphology –
The rose leafhopper is a small insect about 3-5 mm long.
At the adult stage it is recognized for its whitish color, with pitched roof wings on the body.
The nymphs are yellow – whitish in color, are atterous and live, like adults, on the underside of the leaves.
The eggs of this insect are very small and difficult to identify with the naked eye.

Aptitude and biological cycle –
Edwardsiana rosae overwinters as an egg, which is deposited under the epidermal tissues, in the young herbaceous twigs.
At the arrival of spring, around the month of April, the activity resumes with the appearance of the nymphs that occurs between spring and summer.
This insect therefore normally turns 2 generations.

Ecological role –
The rose leafhopper is a very polyphagous species, common on many Rosaceae and other ornamental plants.
Because of its activity, due to the bites of nutrition in all stages, both on the leaves and on the buds there are typical discolorations; the upper pages of the leaves appear marbled and shaded, especially along the ribs and in the central part of the leaf.
In this way dotted areas are formed, or entire patches, silvery or whitish-yellow in color, depending on the intensity of the attack.
Due to these manifestations, the affected leaves decrease the photosynthetic capacity even if only intense defoliation occurs rarely.
The most intense symptoms occur in spring and summer.
Although the damage is often unpleasant, roses are generally able to resist heavy attacks and, where possible, the damage should be tolerated and the use of pesticides only as a last resort. These parasites have many natural enemies and in many cases natural processes limit damage.
In case of heavy infestations, treatments can be performed, with the first symptoms, with fenitrotion, pyrethrum extract, etofenprox and pyrethroids. Today with the help of traps for monitoring, with pheromones and chromotropics, it is possible to apply a good type of integrated control, intervening with the chemist only before the damage becomes unacceptable, in the event that biological control is not sufficient.
However, please note that flowering plants must never be sprayed in order not to damage pollinating insects.