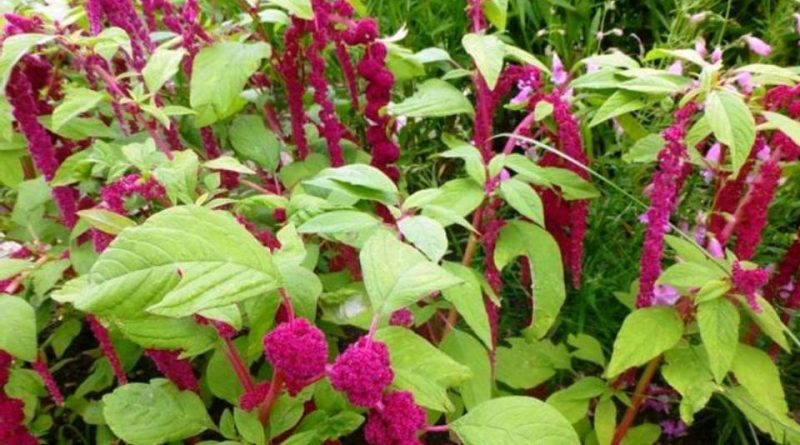 Etymology –
The term Amaranthus comes from the Greek ἀμᾰραντος amárantos which does not wither (from the privative prefix α- a- without and from μᾰραίνω maraíno wither, to fade).
The specific epithet caudatus refers to the thin, elongated and curved inflorescence like a tail.

Geographical Distribution and Habitat –
Amaranthus caudatus is a plant that is not found in the wild.
Its origin should be in the Andes, where it probably formed as a hybrid between the wild Amaranthus hybridus L. subsp. quitensis (Kunth) Costea & Carretero and the cultivated Amaranthus cruentus L. (which is native to Central America).
This plant has long been grown as a food crop in the Andes, e.g. by the Incas; in fact, the largest genetic variation occurs in this area (Ecuador, Peru, Bolivia and Argentina).
Today it is a plant spread a bit all over the globe and cultivated in various parts, where it can also be found in the wild as it has escaped cultivation. 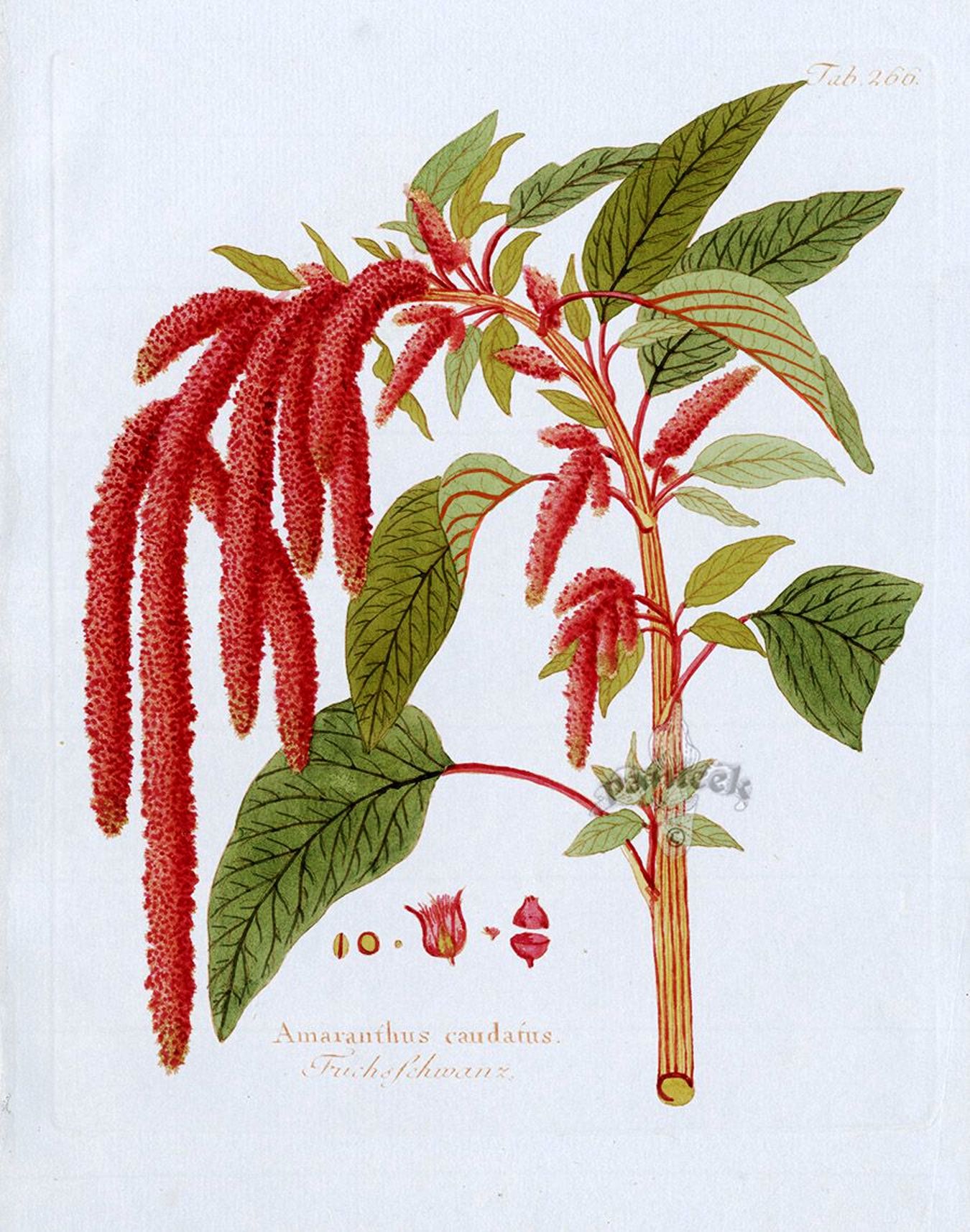 Description –
Amaranth is a large herbaceous plant with an erect bearing, which reaches 90-100 cm in height.
The leaves measure 3-15 x 2-7 cm, ovate-oblong or rhomboid-ovate, with wedge base, obtuse to subacute apex, mucronate; the stalk is 7 cm long.
The flowers are gathered in axillary peaks and red, purple or green terminals in panicles about 20 cm long; contemporary presence of male and female unisexual flowers mixed together. Presents
The perianth measures 2-3.5 mm in length, oblong-elliptical, aristate.
Presence of 5 stamens in male flowers. The stigma is 3-lobed, erect or flexible. The utricle measures 2 mm in length, ovoid-globose in shape.
The fruit is a pissidium of a largely ovoid to subglobous shape, of 1.5-2 (2.5) mm, ± equalizing the petals.
The seeds are brownish-blackish or reddish-brown, yellowish or whitish, from lenticular to subglobose, with a diameter of 1-1.2 (1.5) mm, smooth or indistinctly pointed.

Cultivation –
The Amaranth plant is a species that grows easily in many climates and soil conditions and can be easily propagated from seed.
In most cases it is planted as an annual summer species. In temperate regions, plants can be started indoors in early spring and transplanted outdoors after the last frost.
For the details of the cultivation technique you can consult the following sheet.

Uses and Traditions –
Amaranthus caudatus is a plant native to South America which, used for centuries also for food purposes, can be grown as an ornamental plant in gardens, for borders, but also in pots, to better enjoy the pendulous aspect of the inflorescences. Amaranth inflorescences are used as cut flowers and also dried.
This plant also has an ancient tradition where it is considered a sacred plant.
During the Victorian era, flowers had different meanings. They symbolized love, lies, passion; this plant symbolized hopeless love or despair.
The first archaeological evidence of its cultivation dates back to finds found in 2000-year-old tombs in northwestern Argentina. The chronicler Cobo wrote in 1653 that in the city of Guamanga (now Ayacucho) delicious amaranth and sugar-based sweets were prepared.
Amaranthus caudatus was introduced to Europe in the 16th century and later spread to Africa and Asia. The cultivated area has significantly decreased over the years, but Amaranthus caudatus is still cultivated as a food plant (for its seeds) in Ecuador, Peru, Bolivia and Argentina. Occasionally it is grown with the same purposes also in Asia and Africa. As an ornamental plant it is grown in most of the tropics and in some temperate regions.
Amaranthus caudatus is cultivated, as mentioned, in Africa, although its exact distribution is unknown, as it has often been confused with other Amaranth species. It is cultivated in Ethiopia and Eritrea for its seeds and as an ornamental; it was also grown in Uganda and Kenya and has been registered by many other countries in central, eastern and southern Africa and the Mascarene Islands, where it can also be found as a plant that has escaped cultivation.
Many parts of plants, including leaves and seeds, are edible and are often used as a food source in both India and South America.
The red color of the inflorescences is due to a high content of betacianine.
Amaranth is a plant with edible seeds and usually consumed in ways similar to cereals (pseudocereal). Edible species include Amaranthus caudatus, Amaranthus cruentus and Amaranthus hypochondriacus.
However, as it is not a grass, it is not a cereal. However, it is rich in proteins, up to 16%, with high biological value, amaranth, compared to cereals, contains twice as much lysine, an essential amino acid that almost all cereals lack. It has a high content of calcium, phosphorus, magnesium and iron. Thanks also to the high fiber content, it has an explosive effect on digestion and replacement. Being gluten-free, it is indicated for the nutrition of those suffering from celiac disease, or who have intestinal problems, but also to children during the weaning period. It is conveniently used often as a base for baby food or as a valuable ingredient in vegetable soups for convalescents and the elderly.

Method of Preparation –
Amaranth seeds can be eaten boiled, even if, once boiled, a gelatinous mass results (as in tapioca); for this reason it is preferable to cook it in combination with cereals (barley, rice), or with vegetables, with a consequent improvement in flavor and nutritional value. After washing, you can cook in two parts of water with a teaspoon of salt for 20 minutes in a pressure cooker and 30 minutes in a normal saucepan. Do not mix and let stand 10 minutes after cooking in a covered pot, to allow the beans to finish swelling. The taste is slightly sweet. The grains can be roasted with a drizzle of oil, which burst, thus obtaining a sort of popcorn. Alternatively they can be blown. You can also use flour, but not being able to rise on its own due to the absence of gluten, it is good to mix it with spelled or wheat flour.