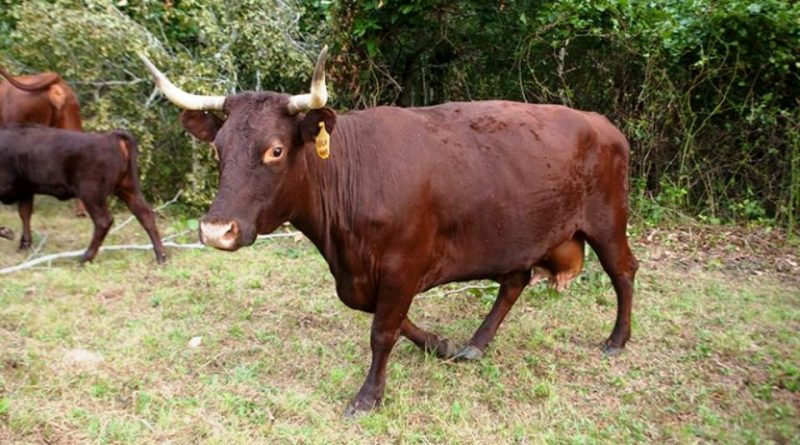 Geographical and Area Distribution –
The Devon cattle breed is an endangered breed bred not only in England but also in the USA, South America and South Africa.

Origins and History –
Devon is a very ancient breed, originally from southwestern England.
Subsequently this breed was also exported to America. In 1623, the first dairy Devon cattle was brought to Massachusetts from Devon (historically Devonshire), a county in the United Kingdom, located on the Cornwall peninsula.
This cow was highly appreciated for its production of both high quality beef and excellent milk used in the preparation of Devonshire cream. In addition, it had a reputation for being tough and able to thrive even in the case of low forage.
Thanks to these skills, these cattle became an inevitable choice for immigrants. The agility they showed in working on hilly and rocky terrain contributed to their popularity in the colonies of New England.
Thus the dairy Devon cattle established itself in New England during the seventeenth century and spread further south along the Atlantic coast to Florida during the eighteenth and nineteenth centuries. However, in the late nineteenth century, this breed was gradually replaced by the Shorthorn, a more productive and multi-functional breed, and by the early 1900s, Devon dairy cattle were rarely found outside of New England. With the crisis in the dual-function livestock market, the dairy Devon had practically disappeared in the mid-1900s.
To cope with this loss, Devon dairy cattle farmers began to select them specifically for meat production. The new population became known as the Beef Devon Bred breed. Some traditional breeders continued the multi-functional selection, which led to a new renamed breed: American dairy Devon (the closest relative of the original dairy Devon).
Devon, originally known as a working breed, capable of producing excellent meat and milk, however, then specialized in the American dairy breed and in the English breed with a prevalent aptitude for meat.

Morphology –
Devon is a breed with a characteristic deep red coat.
The animals are medium in size, with cows weighing around 450 kilos and bulls around 700-750 kilos.
It also has medium long horns with an open lyre shape.
As for the American dairy Devon it is a harmonious breed, of a ruby ​​red color that varies from light to dark, with white horns stained with black on the tip.

Productive attitude –
Devon is a breed that was originally bred for its triple aptitude and which later specialized, following mechanization, for meat production but also for milk production.
It is a breed known for being docile, resistant and easy to give birth. The Devon are ideal in low density farms, since they have an exceptional maternal predisposition and an excellent milking ability.
This historic, efficient, robust and multi-functional breed, due to the small size of its bred animals, was included among the endangered breeds by the American Livestock Breeds Conservancy (ALBC).