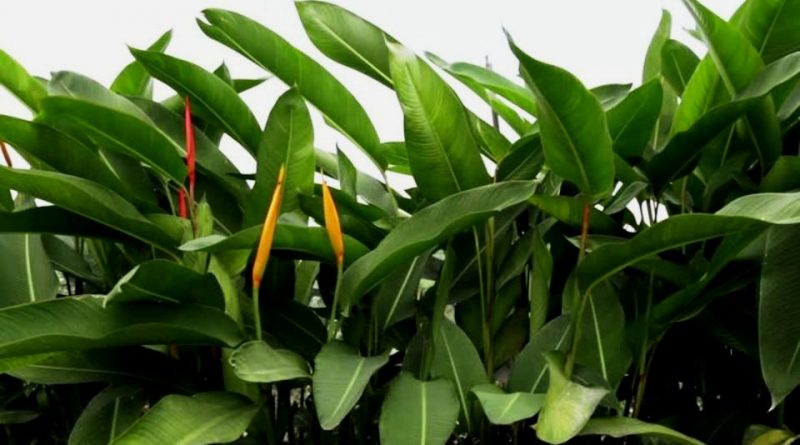 The Colic root (Alpinia officinarum Hance) is a herbaceous species belonging to the Zingiberaceae family.

Etymology –
The term of the genus Alpinia was dedicated to the pre-Linneian botanist Prospero Alpinio (1553-1617), director of the Padua Botanical Garden.
The specific epithet of the rum workshop is the plural genitive of a medieval laboratory workshop: of laboratories, for use in pharmaceuticals, herbal medicine, liquor stores, perfumery and the like.

Geographical Distribution and Habitat –
The Colic root is a plant native to the coasts of the southeast (Hainan Island) and still grows in India and throughout Southeast Asia.
Its habitat is that of tropical areas where the climate is humid and the soil well drained. 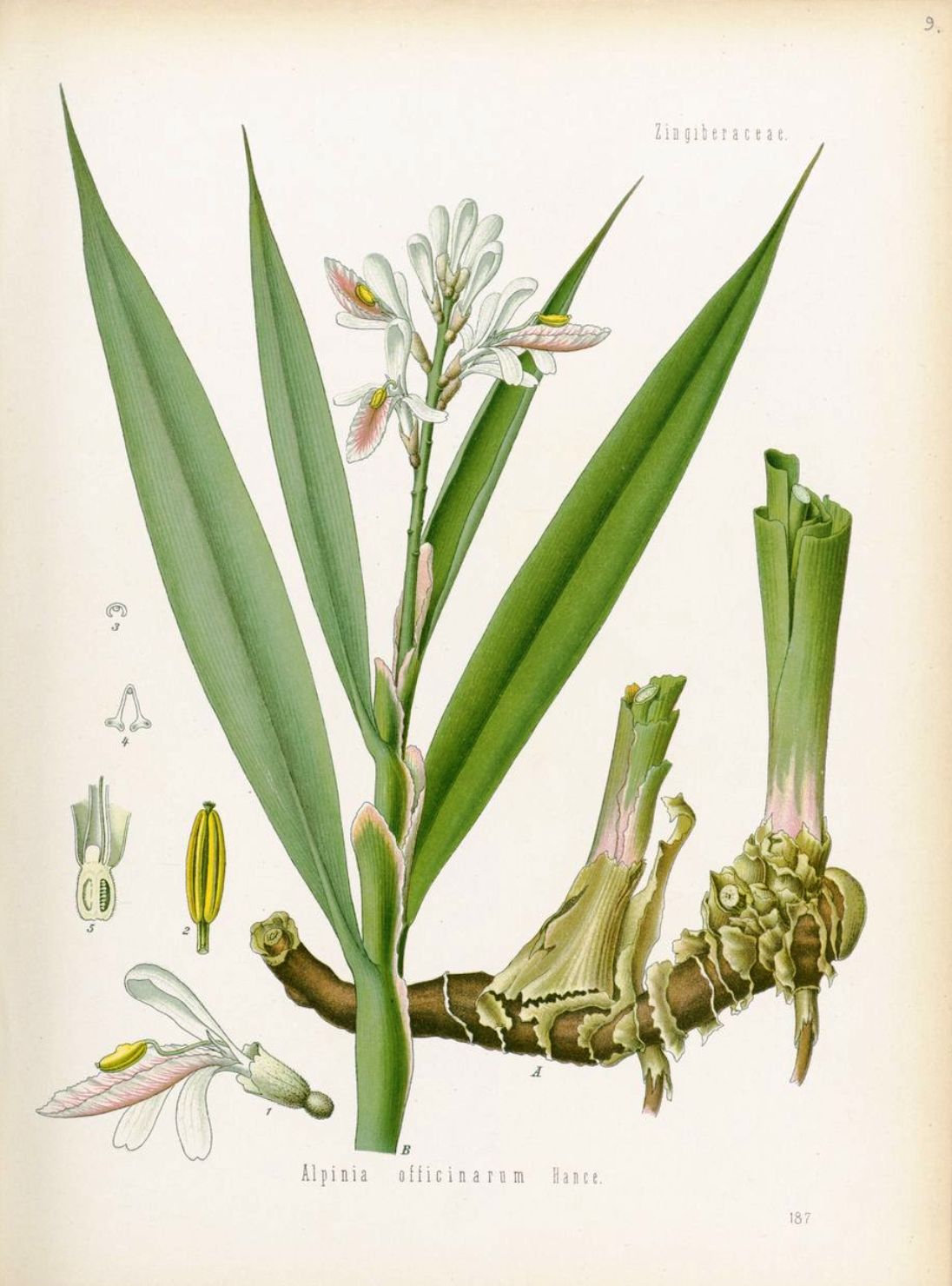 Description –
Alpinia officinarum is a rhizomatous herbaceous species of smaller size than the largest variety, which can rarely reach a meter in height.
The rhizome has an orange-brown color with a red-brown interior, of fibrous consistency, smaller than the major variety (2 cm) but always streaked. This smells of ginger and has a pungent taste with notes of pepper and ginger.
The leaves have the shape of a spear and have parallel, smooth, long and thin veins, very sharp at the top.
The flowers are born from dense spikes, formed by a small, tubular upper calyx; they have a three-lobed white corolla, a large ovoid labellum marked by red bands, a single stamen with anther and a pistil with an inferior ovary and a thin stylus.
The fruits are instead of red berries.

Cultivation –
The Colic root is a plant that tolerates macaws badly where frosts occur so it is possible to grow it in regions with a temperate or not excessively hot climate.
It needs constantly moist but well-drained soil.
Although smaller than the major species, this plant, in optimal conditions, can reach substantial dimensions.
Both for the characteristic of the flowers, which have a strong resemblance to the flowers of the iris and the fruits with red berries, this plant is very attractive from an aesthetic point of view, so much so that many people grow it for ornamental purposes.

Uses and Traditions –
The Colic root has been known in Europe since the Middle Ages, so much so that it is mentioned in the writings of the Arabs Avicenna and Rhazes and described for the first time by H. F. Hance in a scientific journal (Journal of the Linnéan Society, 1871).
The name is thought to derive from the Arabic Khanlanjan, which in turn seems to be the distortion of a Chinese word meaning “sweet ginger”.
In ancient times, the plant was also widely used for its aphrodisiac effects and for its relaxing action thanks to its aromatic qualities.
This plant is used mostly for its therapeutic properties even if it was once found in cooking recipes associated with nutmeg and garlic. Even today it is used in the kitchen, often combined with rice dishes. It has properties similar to ginger: stimulating, carminative and stomachic. It is used against nausea, flatulence, dyspepsia, rheumatism, phlegm and enteritis, in homeopathy and veterinary medicine also for its antibacterial and tonic actions. In India it is a traditional body deodorant and remedy against halitosis. Used in Europe and Asia for centuries as powerful aphrodisiacs.
The root of Alpinia officinarum has a flavor, as well as an appearance similar to that of ginger root. Galangal has minimal nutritional properties.
A spoonful of cooked galangal contains only 5 calories. Also appreciable quantities of fiber, vitamins or minerals cannot be measured.
The active ingredients of galangal root are represented by volatile oil and resin.
It also contains a quantity of volatile oils which vary from a concentration of 0.5% to 1%. There are also numerous active chemicals, including sequiterpenes (naturally alcoholic), eugenol (clove oil) and a mixture of chemical substances is also included, including: cineol, cardinene isomers and galangine , which is in other words an antioxidant enzyme.
Alpinia officina rum has demonstrated antifungal properties, although in reality they have not been officially tested to allow it to be used as an antifungal. Other ingredients are offered in it which are classified as aromatic, carminative, diaphoretic and stomachic, that is, with positive properties for the digestive system. On the other hand, tonic and antibacterial properties are noted, which are exploited in veterinary medicine and also in homeopathic medicine. Specifically, these properties are excellent for solving problems such as fungal infections, pain in the joints and muscles, in other words rheumatism.
As for contraindications, no official studies have been carried out on the uses of galangal, therefore if you wish to make use of it for medical purposes it is best to first inquire adequately with a doctor or an expert.

Method of Preparation –
The usable part of the plant is the root.
The taste of this plant is rather particular and intense; to be able to savor all the intensity of this taste, for the preparation of the dishes it is advisable to proceed by crushing the fresh root so as to soften it and allow it to bring out all its flavor.
However, it is generally used in small quantities only to flavor dishes.
It was once found in cooking recipes associated with nutmeg and garlic. Even today it is used in the kitchen, often combined with rice dishes.
The root is widely used as a condiment in the kitchen, especially in the Asian and Middle Eastern tradition, although in reality the galangal is closely linked to the Thai tradition. It is used in the kitchen for the preparation of typical Indonesian dishes and in any case it is possible to always replace the curry with the galangal. Its use is excellent for enriching fish dishes, but also soups, sauces, chicken, red meat and vegetables. Galangal can be found in frozen form or otherwise in powder or dry form. Typically, a more robust galangal quality is chosen for use in the kitchen, which is the most widely distributed type. The galangal minor is instead, mostly limited to the markets of South East Asia, where it is used for the preparation of more sophisticated recipes. In both cases, the quantity adopted is variable.
Another possible alternative is to consume galangal, making a tea. For the preparation just add 0.5 grams, maximum 1 gram of dried galangal, together with a small dose of rhizome, in boiling water. Leave the tea to brew for a maximum of 5 or 10 minutes and then you can filter the tea and consume it 30 minutes before meals. The tea thus prepared can be consumed even three times a day.
A certain interest has also been shown in the use of galangal as a food additive as regards the preservation of food and specifically for that of meat: with the use of galangal it is in fact possible to obtain a better and prolonged duration of oxidative stability of the minced meat.
From the galangal root it is possible to extract the relative oil, which is followed by a distillation process in water.
As mentioned, as well as for culinary purposes, galangal is also used for medical use, and in particular it is famous in Chinese medicine. It is used against nausea, flatulence, dyspepsia, rheumatism, phlegm and enteritis.