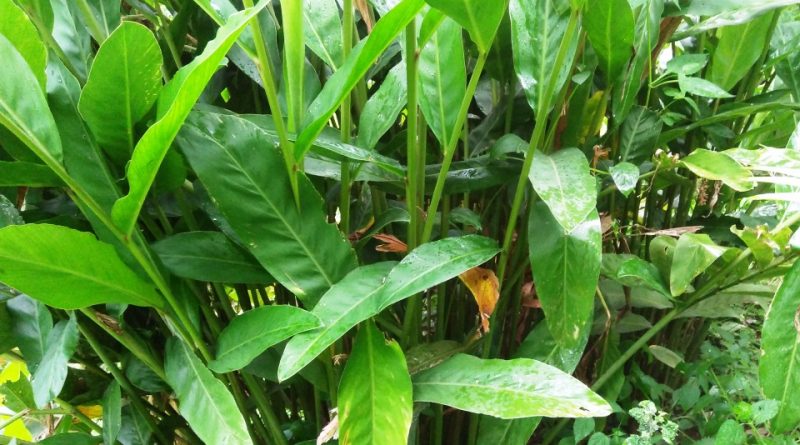 The greater galangal (Alpinia galanga (L.) Willd.) Is a herbaceous species belonging to the Zingiberaceae family.

Systematic –
From a systematic point of view it belongs to the Eukaryota Domain, Plantae Kingdom, Tracheobionta Subregion, Spermatophyta Superdivision, Magnoliophyta Division, Liliopsida Class, Zingiberidae Subclass, Zingiberales Order, Zingiberaceae Family and therefore to the Genus Alpinia and to the species A. galanga.
The term is synonymous:
– Marantha galanga L.

Etymology –
The term Alpinia of the genus was dedicated to the pre-Linneian botanist Prospero Alpinio (1553-1617), director of the Padua Botanical Garden.
The specific galangal epithet comes from the medieval Latin galanga, in turn derived from the Arabic khalanǧān or Persian qulanjan Persian, which in turn could be an adaptation of the Chinese gao liang jiang. Its names in India derive from the same root, including kulanja in Sanskrit, kulanjan in Hindi and kholinjan in Urdu.

Geographical Distribution and Habitat –
Galangal is a species native to Southeast Asia in a range that goes from the island of Java in Indonesia to China and Formosa. This plant is grown in various Asian countries, including Japan, Vietnam, and others. 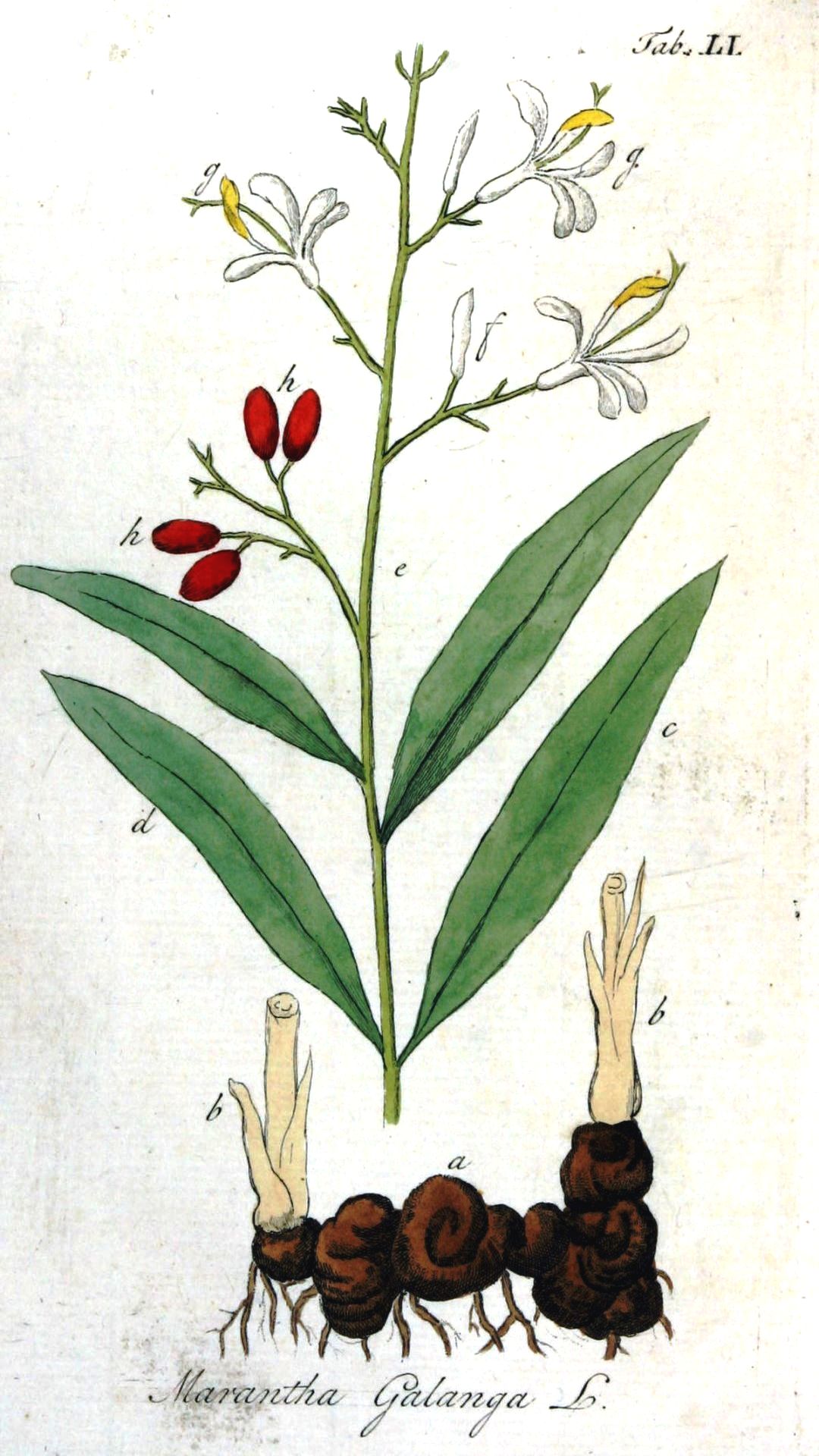 Description –
Alpinia galanga is a herbaceous plant, which can reach 2 meters in height, which develops from a rhizome similar to that of ginger.
This plant is characterized by large leaves, up to 60 cm long by 15 cm wide, with a lanceolate shape, pointed apex and smooth margins; they are glossy, rigid and of an intense green color, when erected with the passage of time they tend to assume an arched bearing due to their weight.
The flowers are gathered in showy panicle inflorescences carried by long cylindrical stems that sprout among the leaves. Each inflorescence is formed by pink or red bracts depending on the variety and cultivar. During the flowering period, small white or cream-white flowers bloom from the bracts and persist on the plant for about 20 days.
Both the leaves and the flowers of the Alpinia galanga give off a pleasant scent of ginger.
Flowering occurs in the spring period.
The fruits are round waxy capsules containing small dark seeds similar to grape arils.

Cultivation –
Alpinia is a tropical plant that can be grown in the apartment or in the gardens of regions with mild winter weather especially in southern and insular Italy.
It is a plant that needs humid climate and warm temperatures.
For details of the cultivation technique, see the following page.

Uses and Traditions –
Galangal is a plant that was already known in ancient Egypt, and used for fumigation. It was introduced to Europe in the Middle Ages but, outside Southeast Asia, it has gone out of use over time.
It was also known, as a medicinal plant, to Greek and Arab doctors from which it was used as a component of numerous medicinal compounds.
This plant was introduced by the Italian botanist Prospero Alpino, professor of botany at the University of Padua in the first decade of the 1600s, in the botanical garden of Padua, thus contributing to its diffusion.
This plant is used for its rhizome which is particularly fleshy and aromatic, very similar to ginger.
In the East, the various species of Galangal are widely used in cooking.
Galangal major is rich in essential oil rich in alpha-bergamotene, beta-bisabolene, eugenialcetate and flavonoids such as galangine.
The plant has anti-inflammatory, antirheumatic, immunostimulant, antiallergic, eupeptic, carminative, expectorant, antimicrobial, antifungal, vermifuge properties.
No contraindications were found, but as a precautionary principle, their use during pregnancy and breastfeeding is not recommended. Instead, it can manifest interaction with some immunosuppressive drugs, decreasing their effectiveness.
In Ayurvedic medicine the indicated daily dosage is 1-3 grams of powder or 50-100 ml of decoction.
In Southeast Asia, a tonic is prepared with lime juice and grated galangal. It is used in oriental medicine as a remedy for phlegm and other respiratory problems. The fruits are used in traditional Chinese medicine.
Since 1777 it is one of the ingredients of the bitter Petrus.
In the rhizomes of Alpinia galanga there are: 0.04% of essential oil (in the fresh drug), in which 48% methyl cinnamate, 20-30% cineene, camphor and a terpene (probably d-pinene) were found. Also contained are: flavonols, galangine and an oil known as galangine, which following fractional distillation produces cineol (which has medicinal properties), pinene and eugenol, among others.

Method of Preparation –
As well as for pharmaceutical and therapeutic purposes, the greater galangal is mainly used in gastronomy as a spice to flavor dishes, especially in Thai and Indonesian cuisine, its rhizome has a pungent smell and a sweet taste. It is one of the basic ingredients of Thai tom yam and tom kha kai soups.
In addition, in the Middle Ages it was used, together with other spices, for the preparation of the Hippocrasso, a spiced fortified wine, highly appreciated both by the people and by the aristocrats of the time.
From the rhizome of this plant you can also prepare extracts and tinctures.