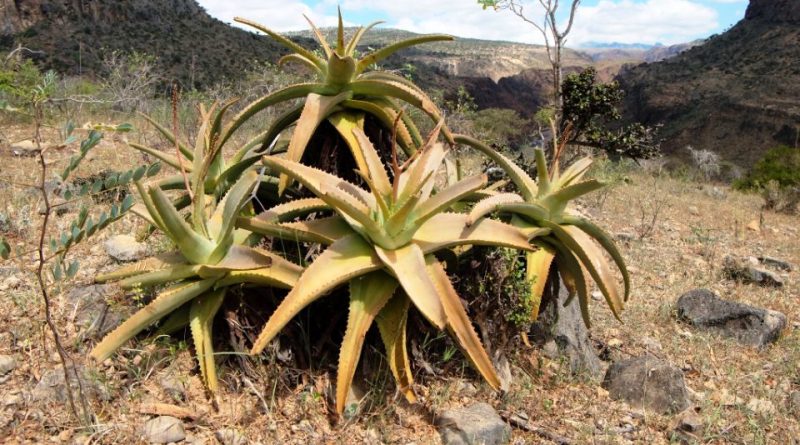 Systematic –
From a systematic point of view, it belongs to the Eukaryota Domain, Plantae Kingdom, Magnoliophyta Division, Liliopsida Class, Liliales Order, Aloeaceae Family and therefore to the Genus Aloe and to the Species A. perryi.
The terms are synonymous:
– Aloe forbesii Balf. f .;
– Aloe socotrina.

Etymology –
The term Aloe comes from aloe in Pliny, probably from the Greek ἅλς, ἁλός háls, halós mare, salt or, more likely, from the Arabic aluat cosa amara, for the bitter juice.
The specific epithet perryi was attributed to him in honor of the commodore William Wykeham Perry (~ 1846-1894) who collected plants in Socotra (where he discovered this species in 1876).

Geographical Distribution and Habitat –
Aloe perryi is an endemic species on the island of Socotra in Yemen.
Its habitat is that of the territories with arid climate, on flat or gentle slopes, mainly on calcareous soils but occasionally also on sandy soils or rocky granite areas, at altitudes from sea level to 900 meters high. 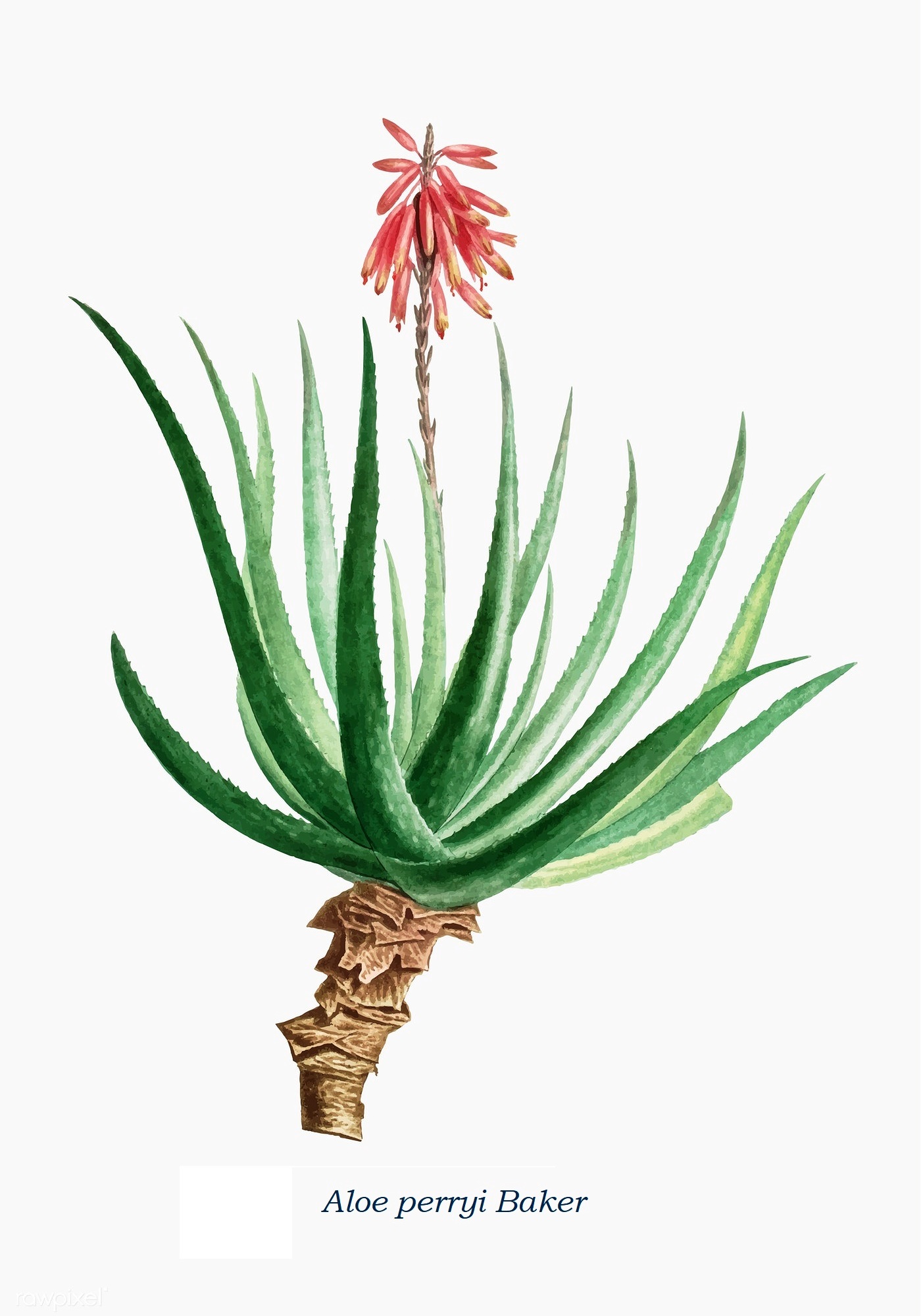 Description –
Socotrine aloe is a succulent and evergreen herbaceous species that grows up to 30 cm in height.
The roots are robust and fibrous, with numerous and persistent, fleshy leaves, usually blue-green but sometimes reddish in color, especially if the plants are in very sunny positions. The leaves come from the upper part of the root and are narrow, tapered, thick and fleshy in shape, with thorny spike edges present.
The inflorescence is branched and the flowers are reddish orange with yellow tips.
As with other Aloes, it is a species with high morphological variability.

Cultivation –
Aloe perryi is a plant that grows in the predominantly arid and semi-arid plains of the tropics. It grows best in areas where annual daytime temperatures are between 22 and 27 ° C, but can tolerate extremes between 12 and 31 ° C.
The plant can die at temperatures of 5 ° C or lower.
It prefers an average annual rainfall that is in the range between 400 and 700 mm, but tolerates extremes between 250 and 1,400 mm.
It adapts to poor soils but requires well-drained soil, with a light to medium texture and position in full sun.
The soil pH must be between 6.5 and 7, also tolerating extremes between 6 and 7.5.
As far as reproduction is concerned, it must be done by sowing the seeds in a sandy and well-drained soil in a warm and shady position in the seedbed. The seed should be covered with a thin layer of sand (1-2 mm) and kept moist.
Germination lasts about three weeks. The seedlings can be transplanted into individual bags or containers, as soon as they are large enough to be handled.
Since this species, like other succulents, has a CAM-like metabolism, it can find carbon dioxide at night and photosynthesize with closed stomata during the day, thus minimizing water loss.
This type of physiology and biochemistry, combined with the presence of succulent leaves and stems and a thick cuticle, make it very suitable for particularly dry climates.

Uses and Traditions –
Socotrine Aloe is a plant that has similar uses to other Aloes and especially Aloe Vera.
The transparent gel contained in the leaf is an excellent treatment for wounds, burns and many other skin ailments, placing a protective layer on the affected area, speeds up the cure rate and reduces the risk of infection. The gel is also applied externally to treat hemorrhoids.
These actions are partly due to the presence of aloectin B, which stimulates the immune system.
The leaves, deprived of the external skin, are eaten to relieve sore throat and cough and as a light laxative. As a dietary supplement, the leaf gel is said to facilitate digestion and improve blood and lymphatic circulation, as well as kidney, liver and gallbladder functions.
From this Aloe, as from others, a bitter substance known as “aloe bitter”, which contains anthraquinones, substances useful to stimulate digestion, as well as being a strong laxative, is obtained from the sap at the base of the leaf.
It also has vermicidal properties; it is taken internally in the treatment of chronic constipation, in case of poor appetite, digestive problems, etc.
This substance, mixed with other ingredients to mask its bitter taste, is taken against asthma and to treat coughs. Similar mixtures are prepared and taken to treat dysentery, kidney problems or against dyspepsia.
Generally it should be administered, preferably, in combination with an antispasmodic to moderate its effect.
Among other uses, it can be applied externally, as a refreshing, to treat acne or cuts.
However, care must be taken as the substances contained in this plant have strongly purgative actions, so you must pay close attention to the dosage.
Anthraquinone laxatives contained in aloe juice should not be used for more than 8-10 days, nor by children under the age of 12. Contraindications include pregnancy, breastfeeding, intestinal inflammation and hemorrhoids.
In addition, the use for long periods of anthraquinone-based laxatives can also play a role in the development of colorectal cancer as they have genotoxic potential and gene tumors.
In this regard, please note that the anthraquinone content decreases in pot-grown plants.
As for the ecological aspects of this plant, at present, it is not in immediate danger but some populations are potentially vulnerable due to some pests, climate change and excessive harvesting. In fact, Aloe perryi is normally harvested in the wild for local use and for international trade.
At present the distribution of this species is still wide so it is not in immediate danger.
The plant is classified as “Near Threatened” on the IUCN Red List of Threatened Species (2013).

Method of Preparation –
Aloe perryi can be used the same as Aloe vera and other Aloes, both directly on the wounds, deprived of the external cuticle of the leaves and to obtain the gel. The leaves can be cut in half along their length and the internal pulp is rubbed on the affected area of ​​the skin.
This, as mentioned, has an immediate calming effect on all types of burns and other skin problems.
However, for other preparations it is always advisable to seek medical advice.