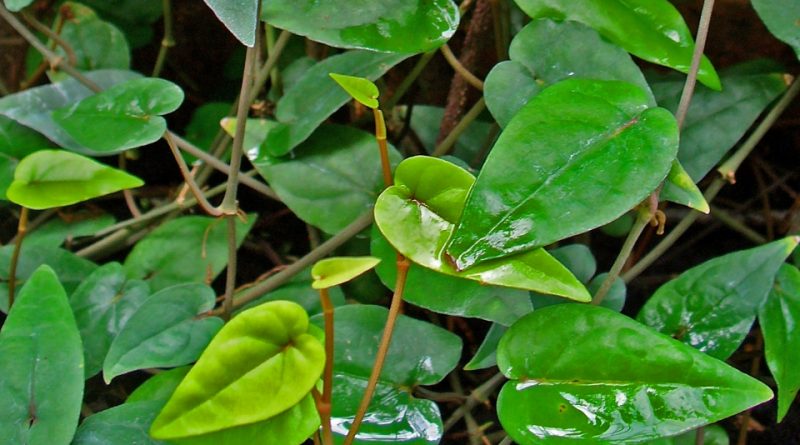 The cubeb or tailed pepper or also Java pepper (Piper cubeba L.) is a climbing species belonging to the Piperaceae family.

Systematic –
From a systematic point of view it belongs to the Eukaryota Domain, Kingdom Plantae, Magnoliophyta Division, Magnoliopsida Class, Piperales Order, Piperaceae Family and therefore to the Piper Genus and the P. cubeba Species.

Etymology –
The term Piper comes from the Greek πέπερι péperi (in Sanskrit píppali): that is pepper.
The specific epithet cubeba comes from medieval English Quibibe and from medieval Latin cubeba, a term derived from the Arabic dialect kubāba.

Geographical Distribution and Habitat –
Cubeb is a widespread and cultivated plant especially in Indonesia (mainly in Java and Sumatra) but also in other parts of the tropics, for its use as a medicinal plant, seasoning and source of an essential oil. 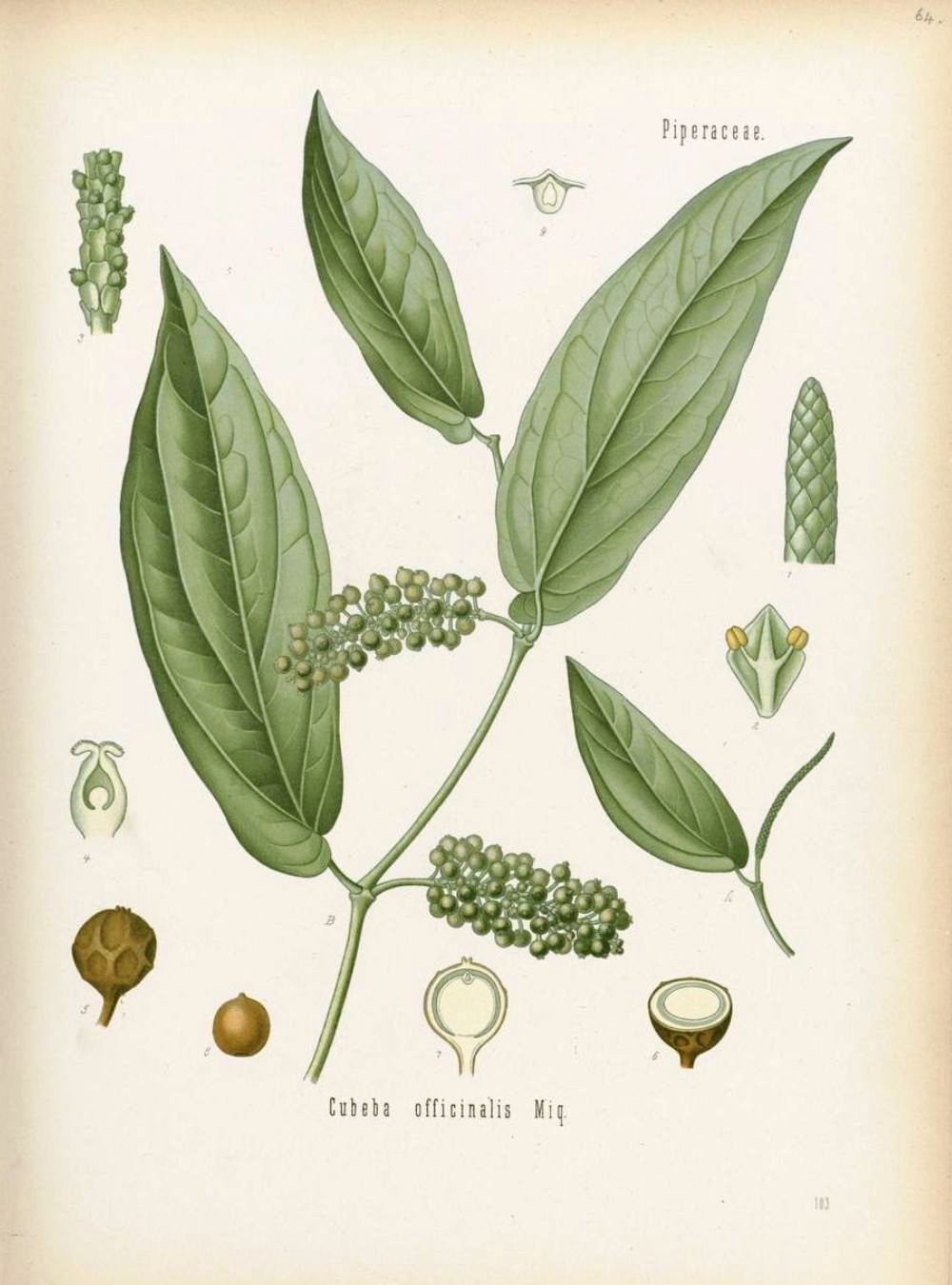 Description –
Piper cubeba is an evergreen climbing shrub that bears stems up to 6 meters long.
The leaves have an oval and elongated shape, leathery consistency and dark green color.
The flowers are sessile and gathered in inflorescences.
The fruit is a drupe, very similar to the black pepper drupes, which remains attached to the peduncle with which it was joined to the plant even when dried.
The pericarp of the dried fruit is wrinkled, with a color that varies from brown to grayish to black; the inner seed is white and oily, due to the presence of numerous essential oils.

Cultivation –
Cubeb or Java pepper, is a plant cultivated for its fruits, which are then dried to be used as spices and from which essential oils are obtained.
In its cultivation it is frequently planted as a secondary culture on shade trees with coffee and other plantations.
Propagation occurs by seed.
The fruits are harvested before they are ripe and carefully dried.
The appearance of the fruit is very similar to that of black pepper, with which it has often been confused, and for this reason it is also called gray pepper.

Uses and Traditions –
Piper cubeba is a plant mainly grown in Java and Sumatra.
It has an odor described as pleasant and aromatic and a pungent, acrid, slightly bitter and persistent taste, described as a cross between the taste of allspice and that of black pepper.
The history of Piper cubeba is linked both to some beliefs and to commercial issues.
In the 4th century BC, Theophrastus mentioned komakon, including it with cinnamon and cassia, as an ingredient in aromatic packaging. Guillaume Budé and Claudius Salmasius have identified the komakon with cubeb, probably because of the similarity that the word brings to the Javanese name of cubeb, kumukus.
This hypothesis is seen as evidence of the Greek trade with Java in times before that of Theophrastus.
It is however unlikely that the Greeks acquired this plant somewhere else, as Javanese growers protected their trade monopoly by sterilizing the berries with heat, thus ensuring that it was not grown elsewhere.
During the Tang dynasty, this plant was brought to China by Srivijaya.
In India, the spice was called Kabab Chini, that is, “Chinese cube”, probably because the Chinese had interests in its trade or, more probably because it was an important element in trade with China.
In China this pepper was called both vilenga and vidanga (the related Sanskrit word). Tang doctors have given it for a long time as a spice to restore appetite, cure “demon vapors”, darken hair and perfume the body.
However, there is no evidence showing that this pepper was used as a seasoning in China.
Among the historical finds, the Book of a Thousand and One Nights, compiled in the ninth century, mentions the “cubob” as a remedy for infertility, showing that it had already been used by the Arabs for medicinal purposes.
Cubeb was introduced into Arab cuisine around the 10th century.
In Marco Polo’s Travels, written at the end of the thirteenth century, Java is described as a producer of Cubeb, along with other precious spices.
It was in the 14th century that this plant was imported into Europe, under the name of pepper.
A 14th-century moral tale, which highlights the gluttony of the Franciscan writer Francesc Eiximenis, describes the eating habits of a worldly cleric who consumes a bizarre mixture of egg yolks with cinnamon and Cubeb after his baths, probably as an aphrodisiac.
At the beginning of its introduction to Europe, Cubeb was thought to be repugnant to demons, in the same way as the Chinese considered it.
The Catholic priest, Ludovico Maria Sinistrari, who wrote about the methods of exorcism at the end of the 17th century, includes this spice as an ingredient in an incense to ward off nightmares.
Even today, its formula for incense is cited by neo-pagan authors, some of whom also claim that Cubeb can be used in sachets and love spells.
Legend has it that the king of Portugal forbade the importation of Piper cubeba berries from Java to strengthen the sale of black pepper, in order to better encourage trade relations with India and the rest of Europe (at the time Java had the monopoly of the spice). The spice merchants, in fact, would have sterilized the seeds to make sure they could not be grown on foreign land.
This legend was born from 17th-century writer John Parkinson in his book Theatrum Botanicum.
It is not known to us whether this is true; however, it could explain why the use of Cubeb almost ended in the 16th century, giving rise to the trade and use of black pepper instead.
In this period the culinary use of cubeb drastically decreased in Europe and only its medicinal application continued until the nineteenth century. At the beginning of the twentieth century, cubeb was regularly shipped from Indonesia to Europe and the United States. Trade gradually decreased and ceased after 1940.
Today it continues to be used as a flavoring agent for gin and cigarettes in the West and as a seasoning for food in Indonesia.
This spice is used in some cuisines, such as Iraqi, Moroccan, Australian and Middle Eastern and is the favorite pepper in Indonesia and Malaysia.
In Europe and the Americas, Java black pepper is rarely seen or used in cooking.
As said, this spice has a strong, spicy smell and an aromatic, bitter, decisive flavor. Fruits are one of the ingredients of “ras el hanout”, a legendary blend of spices from Morocco.
Cubeb oil is used as an aroma in spicy sauces, pickles, bitters and stimulants as for certain cigarettes and digestive liqueurs.
As a medicine, cubeb is a bitter, antiseptic, stimulating herb.
Both fruits and essential oil are used and have diuretic and expectorant effects while improving digestion.
Immature and dried fruits are used in the treatment of cough, bronchitis, sinusitis, sore throat and genitourinary infections, bad digestion and amoebic dysentery.
It is also used as an ingredient in some throat lozenges.
The essential oil obtained from the fruit is a component of the perfumes and soap scents.
Furthermore, in cosmetics, cubeb is often used to adulterate essential oil of patchouli. Several well-known cosmetic companies use cubeb in their anti-wrinkle products.
The fruits contain numerous medically active compounds including an essential oil; a bitter principle (cubebin), an alkaloid (piperidine) and resin.
Among the chemical substances included, in addition to cubebin, a crystalline substance discovered by Eugène Soubeiran in 1839, also cubeb or cubeben camphor, cubebic acid, sesquiterpenes (caryophyllene, copaene, α- and β-cubeben, δ-cadinene, germacrene) and monoterpenes (sabinene, α-thujene, carene).

Method of Preparation –
Cubeb, with a pleasant and aromatic smell and taste associated with allspice but with more bitter notes, is a spice that can be used as it is, or be freshly ground and is used in Arabic, Asian, Chinese, Indian cuisine, Indonesian and Moroccan.
In Indonesian cuisine it is used in a mixture of spices prepared at home.
It can also be used to add flavor to any dish of meat, vegetables or sauces.
Since it was widespread in the Middle Ages, many recipes date back to that period. It can also be candied with sugar or tamarind glaze. In Moroccan cuisine it is often used in pastry; moreover, it can occasionally appear on the list of ingredients for “ras el hanout” which is a mixture of about 30 different plants spread throughout North Africa and can be considered the North African parallel of curry.
In Indonesian cuisine it can be an ingredient in masala. In Poland it is used for Ocet Kubebowy, a typical condiment made up of vinegar, cubeb, cumin and garlic.
On a therapeutic level, however, until not many years ago, cubeb cigarettes were used frequently for the treatment of asthma, chronic pharyngitis and allergic rhinitis.
In the United States, cubeb oil has been included in the list of cigarette additives, published by the Tobacco Prevention and Control Sector of the Department of Health, North Carolina.

One thought on “Piper cubeba”