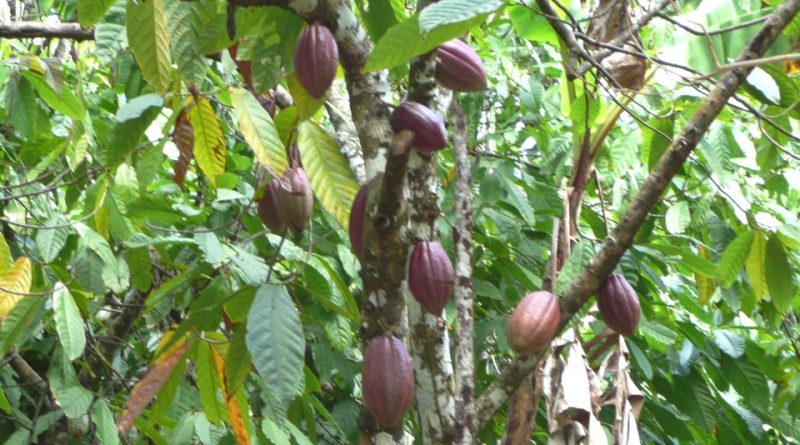 Cocoa (Theobroma cacao L.) is an arboreal species belonging to the Sterculiaceae family.

Etymology –
The term Theobroma comes from the Greek θεός theós god and from βρῶμα bróma food: divine food.
The specific cocoa epithet derives from the Aztec name kakahuatl, and from the Spanish adaptation to this term.

Geographical Distribution and Habitat –
The cocoa tree is widely distributed in a range that goes from south-eastern Mexico to the Amazon basin.
The scholars originally expressed two hypotheses about his domestication: according to one it was believed that there were two outbreaks for domestication, one in the jungle area of ​​Lacandon in Mexico and another in the plains of South America. According to more recent studies on DNA diversity models, however, these suggest that this is not the case. According to a study, which sampled 1241 trees and classified them into 10 distinct genetic groups, some areas have been identified, for example around Iquitos in modern Peru and Ecuador, where representatives of different genetic clusters originated more than 5000 years makes, leading to the development of the variety, the Nacional cocoa.
This result suggests that it is in these areas that the Theobroma cacao was originally domesticated, probably due to the use of the pulp surrounding the beans, which is consumed as a snack and fermented in a slightly alcoholic drink. Using DNA sequences and comparing them with data derived from climate models and known conditions suitable for cocoa, a study investigated the issue of domestication, linking the area of ​​the largest genetic diversity of cocoa to an area shaped like bean that includes Ecuador, the border between Brazil and Peru and the southern part of the Colombian-Brazilian border.
Using climate models, it was concluded that, at the height of the last ice age, 21,000 years ago, when the cocoa habitat was at its peak, this area was still suitable and therefore provided an optimal refuge for the species.
The typical habitat of this plant is that of humid forest ecosystems. This also applies to abandoned cultivated trees, which makes it difficult to distinguish trees of natural origin from those escaped from cultivation. 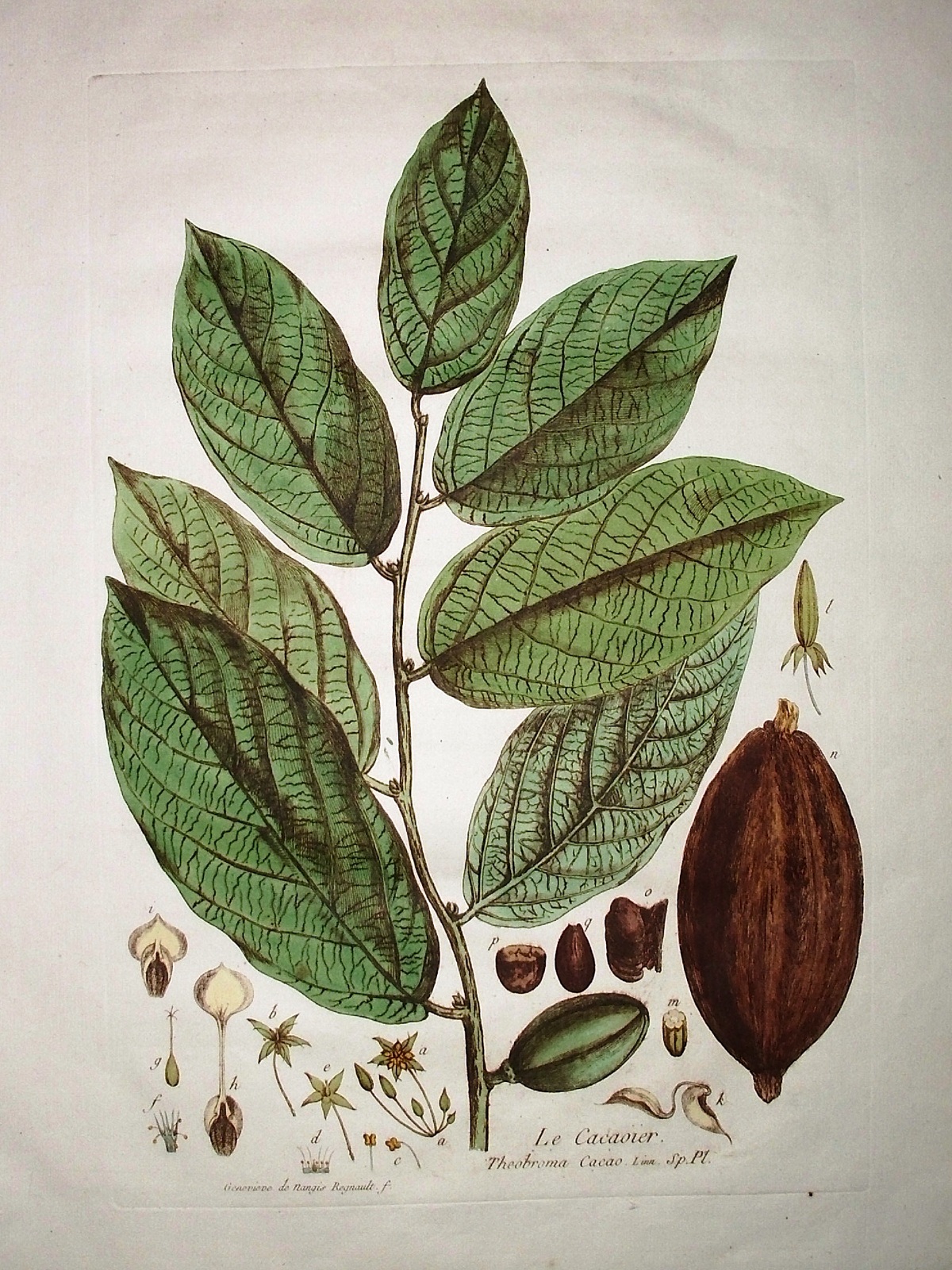 Description –
Cocoa is an evergreen tree that reaches an average height between 5 and 10 meters.
The leaves are persistent, alternate, oval in shape, with a slightly wavy margin, shiny on the upper page and with a leaf petiole with articulation that allows you to orient yourself according to the light intensity. Not all cocoa species have green leaves.
The flowers are small, scattered in bunches, varying in color from white, green or pink, which sprout directly on the trunk or on adult branches; these have a deeply divided calyx, with the five petals being clavate and with the sessile ovary. Of them only a few will turn into fruits.
The fruit is formed from the ovary and takes the name of cabosside, with an elongated form of cedar, yellowish-greenish color, which then becomes reddish brown when ripe, with a skin furrowed by 10 longitudinal strips and can contain from 25 to 40 seeds. The weight of the cabosside varies between 300 and 500 grams (with exceptional weights up to 1000 grams); it has a length of 10 – 15 cm.
The cocoa beans are immersed in a substance rich in sugars, clear and with a gelatinous consistency; these are numerous, oval and flat, almond-shaped, brown-violet in color, arranged in five rows, containing sugars, fats, albuminoids, alkaloids and dyes.

Cultivation –
The cultivation of cocoa requires high planting costs and, moreover, this plant begins to produce from the fifth year, while the fruiting lasts for thirty years.
The cocoa tree fears direct insolation and therefore grows in the shade of tall trees such as palms and banana trees.
On average, each plant supplies 1 to 2 kg of dry seeds; the fruiting is continuous but during the year there are two periods of maximum production.
The fruit is crushed and left to rest for about a week, to then extract its pulp and seeds. A tree produces 20 to 50 ripe fruits per year.
From a geographical point of view, cocoa is grown between the 20th parallel north and the 20th parallel south, at a lower altitude than the wild one, for convenience of harvesting.
The main areas where it is grown are:
– In America where the most appreciated are the Mexican one, the Brazilian Bahía (grown in Brazil, Colombia and Ecuador) and finally the Chuao and Porcelana, grown in Venezuela;
– In Asia, especially in Indonesia and Sri Lanka;
– In Africa, especially the quality produced in Ghana and also those cultivated in Cameroon, Nigeria, Ivory Coast and Madagascar.
Today cocoa is grown on around 69,000 km² worldwide.
There are three subspecies of cocoa which are:
– Criollo cacao – Theobroma cacao cacao also called noble cocoa: it has white seeds, very fragrant and not very bitter; originally from Mexico, it represents the seed of the Maya, not very productive but delicate and of high quality. Criollo cocoa is most widespread in Central America and northern South America, especially in its countries of origin, Ecuador and Venezuela. Particularly sensitive to bad weather, it needs a lot of care and its yield is relatively poor. Its seeds are rich in aroma and odorous substances. The criollo cocoa, both for the reduced quantities that are produced (it represents less than 10% of the total world harvest), and for the higher price, is intended for the manufacture of high quality chocolate. World production does not exceed 1% of the total, while for the production of chocolate, it represents 10% of the cocoa species used.
– Forastero cocoa – Theobroma cacao sphaerocarpum or consumer cocoa: it has violet seeds with a strong and bitter taste. Robust and very productive, therefore cheaper. It is widespread, with it 80% of the chocolate is produced; it represents over 80% of all the cocoa collected in the world. It is grown in West Africa, Brazil and Southeast Asia. More resistant and better yield, forastero cocoa gives a slightly sour and bitter cocoa. In the various cultivation areas, finer or more ordinary qualities are produced, which are selected according to the use for which they are intended or mixed together.
– Trinitarian cocoa (hybrid of the first two): this is native to the island of Trinidad, off the Venezuelan coast, with characteristics intermediate to the first two. It is said that in 1700 a natural catastrophe destroyed all the cultivated criollo cocoa plants, leaving traces on the land. After a few decades some foraster seeds were planted, which developed this new strain. It is grown in: Mexico, Trinidad, the Caribbean, Colombia, Venezuela, Southeast Asia. It represents 10% of the production of chocolate covering 8% of the market and is considered a high quality product.

Method of Preparation –
Today cocoa is mainly used in all kinds of confectionery preparations, to flavor spongy bases for cakes, creams or shortbread or to cover creamy cakes and truffles. It is also mixed with flour in the preparation of different types of homemade pasta (tagliatelle, lasagna) or potatoes, in the dough of dumplings that adapt wonderfully to seasonings with a strong flavor. The main meat dishes are generally garnished with full-bodied cocoa sauces, often enriched with cinnamon or other spices. Both white and red meat are enhanced by this kind of preparations which, sometimes, take up the ancient Mesoamerican tradition of giving a spicy aftertaste to sauces by adding pepper or chilli pepper.