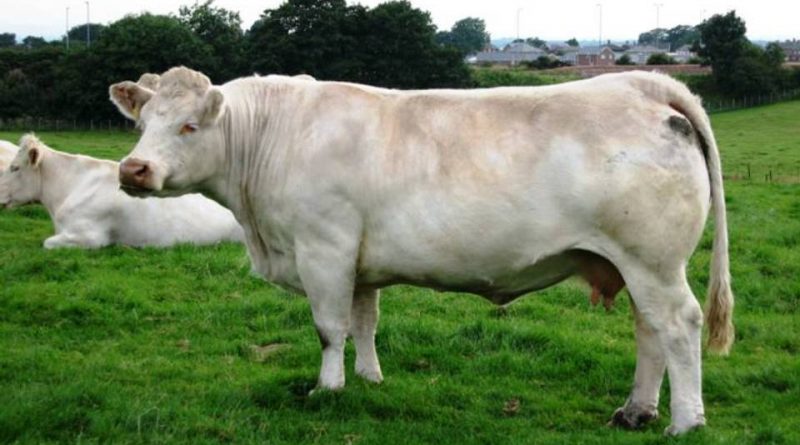 The Charolaise (Bos taurus Linnaeus, 1758) is a French cattle breed originating in the Charolles region of France for the production of meat.

Geographical and Area Distribution –
Cattle of the Charolaise breed are widespread throughout France but this breed has shown excellent adaptability and today it is considered a cosmopolitan breed, with important nuclei both in temperate countries (including Italy), and in areas with a harsh climate and even in countries tropical and subtropical area.

Origins and History –
La Charolaise originates from Burgundy and in particular from the areas of Charolles and Nievres (Briggs, H.M. & D.M. Briggs, 1980).
This breed, for its rustic qualities, for its tendency to produce excellent meat and for its easy acclimatization, has been exported and bred in many other countries, and above all it is used as a cross breed. In the past it was a dual-purpose breed (work and meat), but over time it was mainly selected for the production of meat.
In France, it is the first beef breed and in 1987 the National Association of Charolais and Limousine Breeders A.N.A.C.L.I. was founded in Italy.

Morphology –
Charolais is a bovine breed with an unmistakable appearance. It is a macrosomal breed, with adult males over 1,200 kg and females weighing 700-900 kg.
The shapes are harmonious, with great muscular development, light skeleton, fine skin and cylindrical trunk with an imposing rear train.
The coat color is creamy white or off-white. The mucous membranes are depigmented pinkish in color. The head is small, short, especially in males, with a broad forehead.
The eyes are large and the ears are medium in size and mobile.
The horns are short, yellowish, black at the tip and facing forward.

Productive attitude –
La Charolaise is a breed of fine meat, excellent meat producer.
It is characterized by great muscle development (high sarcopoietic abilities); shows average daily growth rates well above the kg, which, in periods of intensive feeding, reach and exceed 1.5 kg. In intensive farming it is brought to slaughter weights of around 700–800 kg.
The slaughterhouse yield is generally higher than 62%. Considering the net yield, i.e. that relating to the net live weight, purified from the gastro-intestinal content, certainly a more precise and reliable parameter than the gross yield.
The meat yield is favored by a relatively scarce presence of bone tissue: the skeleton, although robust, is rather fine and light. Skeletal strength is a precious legacy of its working breed past and is particularly appreciated by breeders from all continents who use Charolais as a cross breed on milk and rustic breeds; in Italy it is evidenced by the choice of Maremmana breeders who often use Charolais bulls in wild breeding all year round, in environments that are sometimes hostile from a climatic and pedological point of view.
The meats are tender, tasty and rightly infiltrated with marbling fat which gives them a particular succulence. They tend to be lighter in color than that of other breeds, even in semi-extensive breeding conditions, the level of customer satisfaction increases.
Charolais was formerly used as a working breed; with the advent of mechanization in agriculture, it is now bred only for the production of meat.
One of the main qualities of the breed is its excellent maternal qualities: the twin parts are frequent and the cows have no breastfeeding problems; the milk production, entirely destined to the calf, allows optimal growth until weaning, at 6-7 months, which often takes place in the pasture.
The classic breeding system according to the cow-calf line exalts a second valuable characteristic of the breed: that of being an excellent pasture; Charolaise has in fact an ingestion capacity which, for a meat breed, is particularly high. This makes it easy to breed herdsmen with grazing, with all the economic and health benefits that this entails and the calves and calves (producers) themselves can be bred for most of their life with extensive or semi-extensive systems, also benefiting as regards the health characteristics of their meats.
However, it is not very resistant to sunlight due to the depigmented skin.