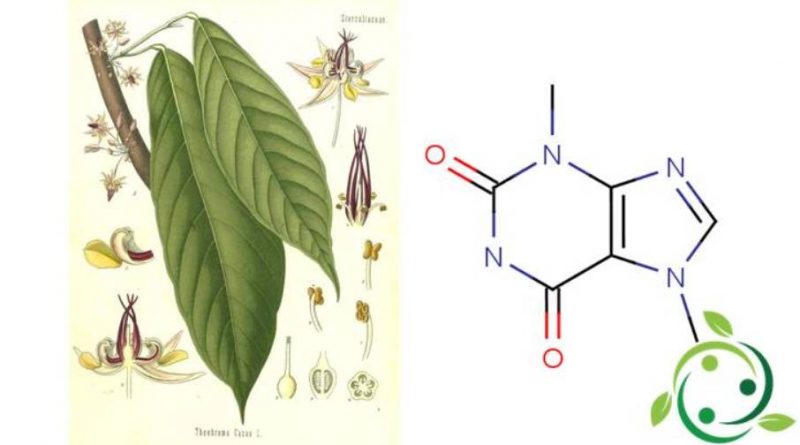 Theobromine, whose term in the official IUPAC nomenclature is: 3,7-dimethylxanthin is an alkaloid with a brute or molecular formula: C7H8N4O2, which at room temperature looks like a white solid.
Theobromine is a natural compound found in cocoa plants (Theobroma cacao L., 1753) and its derivatives. It is also present in small quantities in tea leaves, guarana, cola and mate.
The stimulating effects of cocoa are precisely linked to the presence of theobromine (contained in about 2%), together with caffeine (0.6-0.8%).
On average, in a 100 g dark chocolate bar, we can find 600-1800 mg of theobromine and 20-60 mg of caffeine.
Obviously these are general values, which can vary – even considerably – in relation to the type of seeds, the cultivation techniques and the fermentation process to which they are subjected before being roasted.

In milk chocolate theobromine content is reduced (because the percentage of cocoa is lower), while it is practically zero in the white one.
This alkaloid performs a stimulating action on the central nervous system by intervening on the synapses; it also has a mild diuretic action and has a modest vasodilator effect.
Theobromine is a fairly common ingredient in some energy supplements and in certain creams for the treatment of cellulite.
Theobromine, when consumed in large quantities, is particularly toxic to dogs.
The stimulating effect on the central nervous system is about 10 times less than that of caffeine; at high doses, however, theobromine can cause restlessness, tremors, anxiety, sweats, arrhythmias, loss of appetite, nausea and vomiting.
In men, this substance has negligible toxicity, given that it is metabolized very quickly while, as mentioned, in other animals, such as dogs and cats, it is toxic because it metabolizes it very slowly.