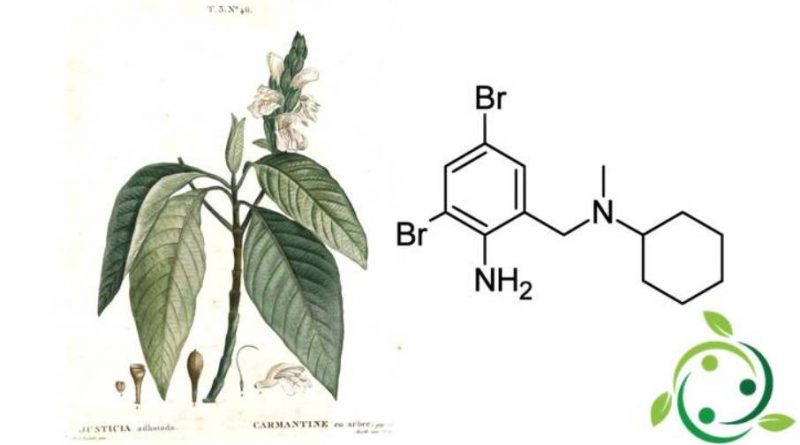 Bromhexine, whose term in the IUPAC official nomenclature is: N-cyclohexyl-N-methyl-4,6-dibromo-2-aminomethylaniline is a substance with brute or molecular form: C14H20Br2N2.
Bromhexine is a molecule that can be obtained from Vasicin which is an alkaloid contained in Adatoda (Justicia adhatoda L., 1753), an evergreen shrub species belonging to the Acanthaceae family.
Bromhexine is therefore a natural molecule but obtainable from an active ingredient of natural extraction, with a marked mucolytic activity.
The increase in the volume and frequency of expectoration, useful in significantly reducing the pain associated with coughing, is determined by the ability of Bromhexine to fluidize mucus deposits, increasing the secretion of neutral mucins and hydrolyzing acidic mucopolysaccharides.
These biochemical modifications induce a secretolytic and secretomotor effect, which increases the muco-ciliary clearance, thus facilitating the passage of these secretions through the respiratory tree.

At the end of its therapeutic action, which is followed by an intense gastro-intestinal absorption and a distribution concentrated mainly at the lung level, Bromhexine, in the form of mainly glucoronides, is eliminated for over 90% through the urine.
For this action, bromhexine is an active principle widely used as a mucolytic in the forms of fat cough, and very often inserted as an active ingredient in products marketed as mucolytics or cough suppressants.
In general, it is used for lung infections (chronic bronchitis, forms of pneumonia), at the normal dose of 24 mg, but adults can reach 48 mg within 24 hours (administered in multiple doses – usually 3).