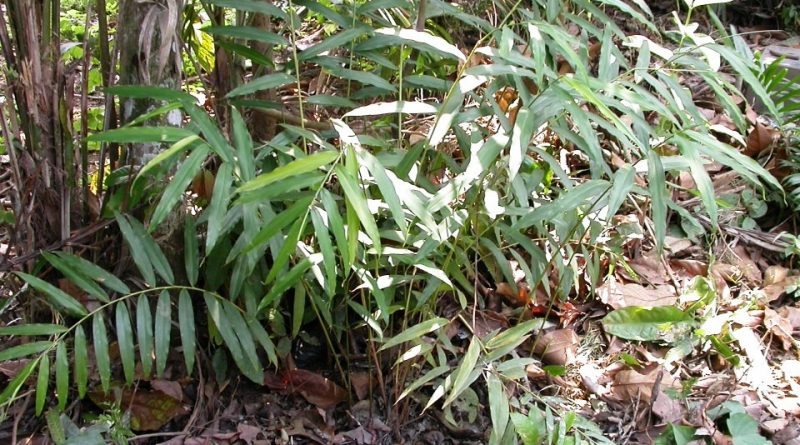 The Malaguetta pepper (Aframomum melegueta K. Schum.) Is a herbaceous species belonging to the Zingiberaceae family.

Systematic –
From a systematic point of view, it belongs to the Eukaryota Domain, Plantae Kingdom, Magnoliophyta Division, Liliopsida Class, Zingiberales Order, Zingiberaceae Family and therefore to the Genus Aframomum and the Species A. melegueta
The term Amomum melegueta is synonymous.

Etymology –
The term Aframomum comes from afer, afra, African afrum and from the genus Amomun (name of an oriental aromatic plant cited by Virgil from which a precious balm was extracted (from the Greek ἄμωμος ámomos irreproachable, perfect, derived from the prefix privative α- a- without and from μῶμος mómos blame, criticism)) aromatic plant of southern Asia.
The specific epithet melegueta originates from the vernacular names: Malagueta Malaguette, melegueta, Mellegetta or Meligetta, from the time when this species was previously marketed. The melegueta was in fact transported through the desert of the west coast of Africa to the coastal ports of Tripoli, where the ancient Empire of Mali or the Manden Empire resided, which was an empire of West Africa (between 1235 and 1645) founded by the Mandinka people who lived in the region between northern Guinea, the Ivory Coast and southern Mali.
According to other sources report that this is a term derived from bad people, the designation applied by the Portuguese to the people who gave the seeds.

Geographical Distribution and Habitat –
The Malaguetta pepper is a plant native to West Africa, native to the countries of the west coast of Africa: Ghana, Liberia, Ivory Coast, Togo and Nigeria.
The area of ​​its cultivation is called Pepper Coast (or Grain Coast) because of this commodity. This plant constitutes important crops in the Basketo district of southern Ethiopia.
Its original habitat is that of the swampy environments found along the coast of West Africa. 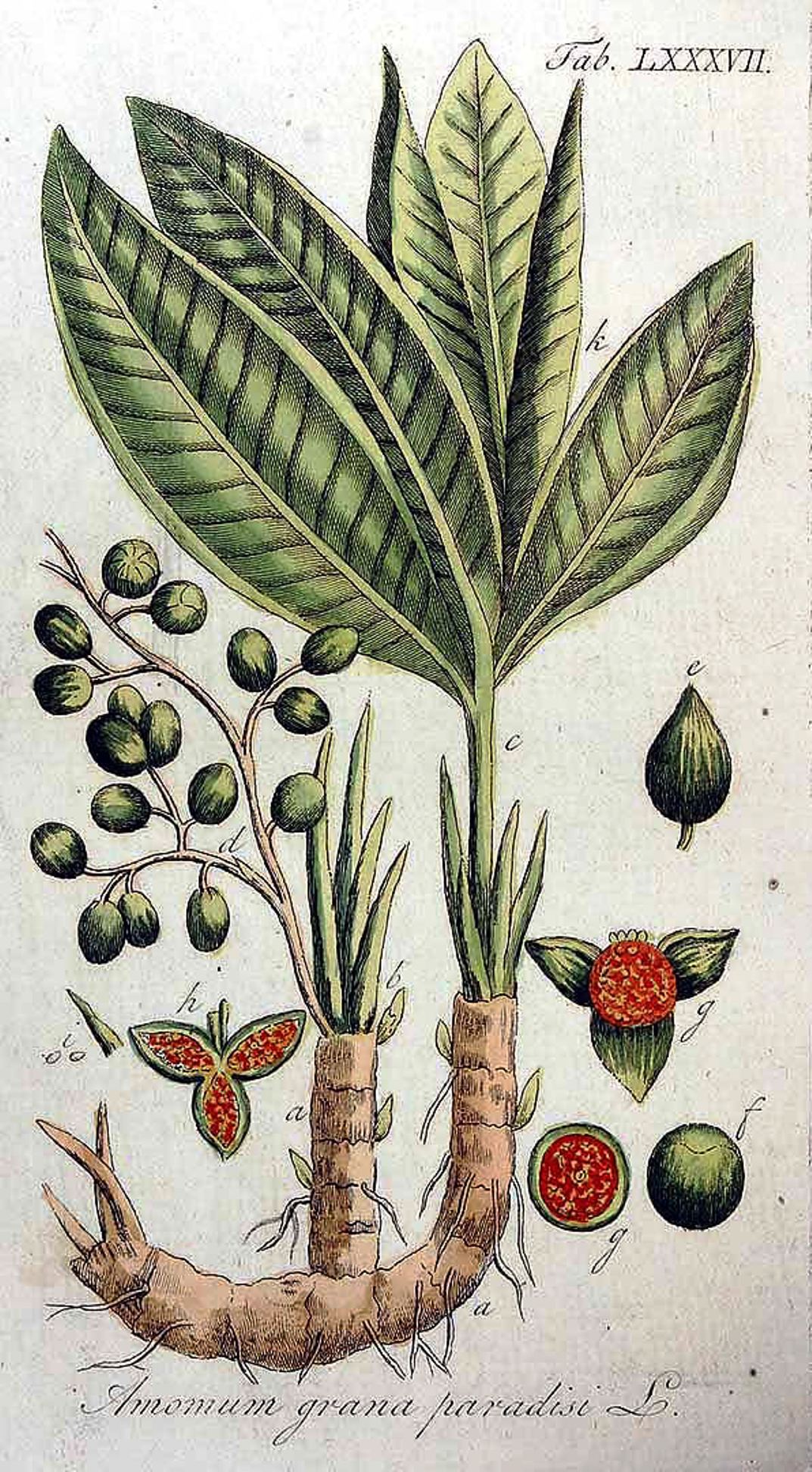 Description –
The Aframomum melegueta is a perennial herbaceous plant that develops from a rhizome, with a barrel-shaped stem, which reaches a height of 1-2 meters.
The leaves are narrow and similar to those of bamboo, 25 cm long and 2, 5 cm wide.
The flowers, which are single, have a trumpet-shaped purple color.
From these, 5-7 cm long, reddish-brown pods develop, containing numerous small seeds of a similar color. The seeds, which have a diameter of about 3 mm, are inserted in a white gelatinous pulp.
Both the flower and the rhizome smell of ginger.

Cultivation –
Aframomum melegueta, is a plant grown in some countries of tropical Africa and, generally, it is grown in temporary clearings in the forest, associated with other crops. The cultivation of this plant, which has been taking place for a long time, has diminished from its previous importance, firstly because of the competition from cocoa, and secondly because of the export restrictions that occurred during the First World War.

Uses and Traditions –
The Malaguetta pepper, better known as Melegueta pepper, is commonly used in the kitchens of western and northern Africa, where it has traditionally been imported from camel caravan routes through the Sahara desert and from where they were distributed in Sicily and the rest of Italy.
This plant is mentioned by Pliny as “African pepper”. Subsequently his was almost forgotten in Europe, where he was renamed “grains of paradise” and became a popular substitute for black pepper in Europe in the 14th and 15th centuries.
The plant was unknown in fact in the West until the Middle Ages, a time when the grains of paradise together with other spices (cinnamon, cloves, and ginger) arrived in Europe through the Sahara, with caravans and were then distributed throughout Europe. In Italy in the Middle Ages this spice is mentioned in a document of 1214, which describes a tournament in Treviso, where gentle Ladies, who defended a fortress, were attacked by Knights with the throwing of flowers and spices, among which precisely the Aframom .
The Ménagier de Paris recommends it to improve wine that “has a stale smell”. During the Middle Ages and in the early modern period, the theory of the four humors governed nutrition theories by doctors, herbalists and grocers. In this context, John Russell defined the grains of paradise in The Boke of Nurture as “hot and humid”.
In 1469, King Afonso V of Portugal granted a trade monopoly in the Gulf of Guinea to the Lisbon merchant Fernão Gomes. Among these was the exclusivity in the trade of Aframomum melegueta, which had a high value, and then called Malagueta pepper.
After Christopher Columbus reached the New World in 1492 and brought the first samples of chilli (Capsicum frutescens) with him to Europe, the Malagueta name and the Spanish and Portuguese spelling were then applied to the new “chilli” because the spiciness reminded the grains of paradise.
The importance of the spice derived from Aframomum melegueta is demonstrated by the designation of the area from the St. John River (near the current Buchanan) to Harper in Liberia such as the Grain Coast or Pepper Coast in honor of the availability of specks of paradise.
Later, interest in the spice lessened and its uses were reduced to a flavor for sausages and beer. In the 18th century, its import into Britain collapsed after a parliamentary act of George III forbade its use in alcoholic beverages.
In 1880, the ninth edition of the Encyclopaedia Britannica reported: “The specks of paradise are to some extent used in veterinary practice, but for the most part illegally to give fictitious strength to malt, gin and cordial liqueurs.”
So in the following centuries, the use declined throughout Europe except in Scandinavia, which had solid trade with Africa and continued to import it.
Today the largest producing country is mainly Ghana, while the user countries are mainly allocated in the production areas and in North Africa.
The parts used of this plant are the seeds that contain essential oils (most are sesquiterpenes and carophyllenes), gingerols that give the pungent aroma and are rich in aromatic ketones (as in cardamom).
They have an aromatic, resinous spicy smell at the beginning, then the spiciness reminiscent of pepper emerges and subsequently the aroma of cardamom emerges.
The taste is spicy, pungent, warm, slightly bitter with a hint of ginger and cardamom but without the camphorized taste of the latter.
It is sold either in whole or ground dried seeds. The powder has a light gray color.
For the purchase it is advisable to carry it out little by little, as it easily loses its aroma.
The Malaguetta pepper were already mentioned in a famacopeia of 1597, in which its virtues were recognized. Numerous clinical studies are currently underway to evaluate any pharmacological properties as anti-inflammatory and metabolism activators. Confirming the properties of Aframomum melegueta, some zoologists have recently observed that the gorillas of West Africa look for plants of paradise grains to eat them and when they are in captivity in the zoos and do not eat this spice, they develop cardiovascular diseases.
There is a tradition in West Africa where, when a guest arrives, the first thing you offer is the chewing grains of paradise and everyone knows that these are essential for staying healthy. Today they continue to be used as a remedy in natural medicine.
In Congo the seeds are used for magic rites in the form of bracelets in which they are collected in a number of seven or multiples thereof.
In West African folk medicine, the grains of paradise are valued for their warming and digestive properties, and among the efiks in Nigeria they have been used for divination and guilt-determining tests. This plant was introduced in the Caribbean and Latin America, where it is used in religious rites (voodoo).

Method of Preparation –
As said, for best results, the grains of paradise must be ground and added at the end of cooking or just before serving the dish so that they do not lose their aroma.
We also recommend keeping them in a cool, well-ventilated, dimly lit and humidity-free environment.
The Malaguetta pepper were used in the past in Europe to flavor beer and wine, and as substitutes for black pepper when the latter reached too high prices. Today it is mainly used in the ethnic cuisine of West Africa to flavor vegetables and chicken. In Morocco they are sometimes found in the ras el Hanout mixture. In Tunisia they use them in a spice mixture called Gâalat dagga which contains them together with black pepper, cloves, cinnamon and nutmeg.
Today in western cuisine they are little used. Their light spiciness and their complex aroma still goes well with vegetables such as aubergines, pumpkin and potatoes. They can be used to flavor mayonnaise or vinaigrette or for white meat fish, crustaceans or roasted lamb. It can be mixed with black pepper for a more aromatic version of the pepper steak. Contrary to the strong flavor they have when chewed on their own, they can be added to dishes with good results. They are used to flavor some beers such as Samuel Adams, some gins and brandy in Norway.
However, the specks of paradise are now beginning to enjoy a slight recovery in popularity in North America due to their use by well-known chefs. These seeds are also used by people who follow certain diets, such as a raw food diet, because they are considered less irritating to digestion than black pepper.