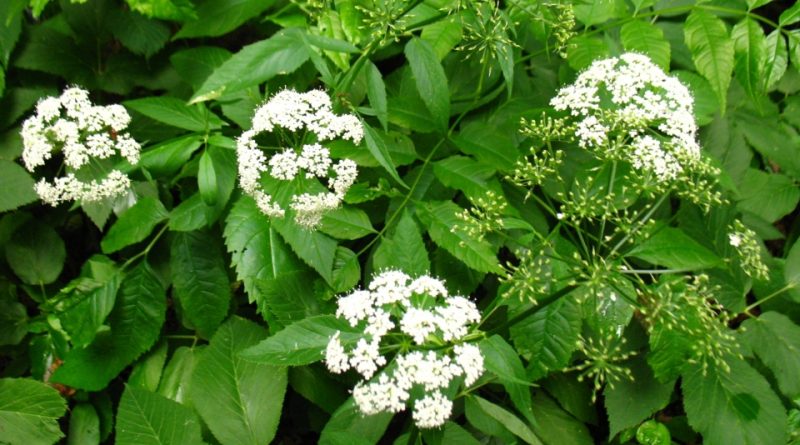 The Ground elder (Aegopodium podagraria L.) is a herbaceous species belonging to the Apiaceae family.

Geographical Distribution and Habitat –
Ground elder is a plant widely distributed in the temperate zone of western Eurasia, from France to northern Russia. From here it was introduced to other countries such as: Ireland, Great Britain, the United States, Canada, Australia, Tasmania, New Zealand, Japan and others.
In Italy it is present in all peninsular regions, except in Puglia, Basilicata and Campania.
Its habitat is that of the edges of the deciduous deciduous forests and in disturbed sites near the houses, even in humid places such as long ditches and canals, on fairly deep silty-clay soils, from fresh to wet, rich in nitrogen compounds, from the level of the sea to the mountain belt. It grows, often with invasive behavior. 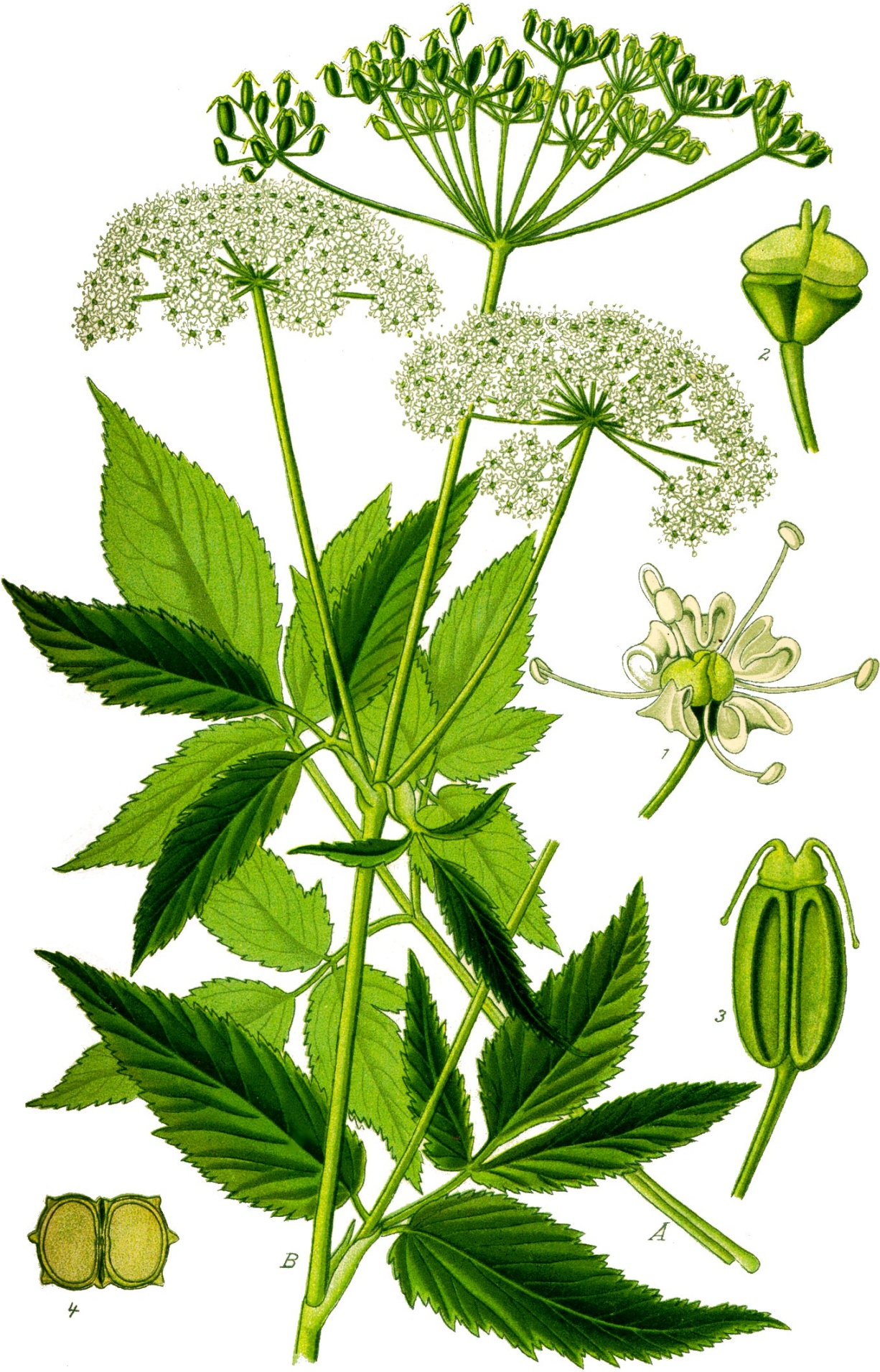 Description –
The Aegopodium podagraria is a perennial herbaceous plant, which grows up to 8o cm in height, rhizomatous, glabrous that smell of parsley in the rhizome.
The stem is erect, papillose and angular pubescent.
The basal leaves have a long fluted fairing petiole, with a bi-ternate lamina with a triangular outline; the cauline leaves have reduced lobes and petioles.
The flowers are umbrella-shaped, composed without bracts or bracts, with 10 – 20 rays; the flowers, for the most part, are hermaphrodites; sometimes some are just male.
They have white or pink bifid petals with acute apex; prominent stamens.
The antesis is between May and August.
The schizocarpic fruit is a 3-4 x 1-3 mm polachenary (diachenio), ± ovoid, slightly laterally compressed, hairless, brownish when ripe, with flat-convex mericarp, with wide commissure, 5 primary ribs, vitta not visible at maturation, bipartite carpophore. Seeds with flat endosperm in the commissural face.

Cultivation –
Ground elder is a plant that, introduced all over the world as an ornamental plant, often constitutes an ecological threat as an invasive exotic plant. It prefers shady uncultivated places, gardens, edge of deciduous woods, hedges, ravines, on a fresh substrate rich in nitrogen nutrients with a basic to slightly acidic pH, from 0 to 1800 m above sea level.
It spreads both by seed but above all by rhizome, where due to the tillage and the indiscriminate use of nitrogen fertilizers it can be spread widely.
Some varieties can be grown as ornamental plants.

Uses and Traditions –
The Ground elder was used in antiquity as a food plant.
The tender leaves were also used in the Middle Ages as a spring leaf vegetable, just like spinach and it is commonly used to prepare soups.
It was also used as a medicinal herb to treat gout and arthritis, applying warm wraps externally and boiling leaves and roots together.
The leaves, if ingested, have a diuretic effect and act as a light sedative.
Its use as a medicinal herb has declined widely during the modern era.
The plant is said to have been introduced to Britain by the Romans as a food plant and in Northern Europe as a medicinal herb by monks. It is still found growing in spots that surround many monastic ruins in Europe, and descriptions of his are reported in some monastic writings, such as in Physica by Hildegard von Bingen.
This species, introduced all over the world as an ornamental plant, in some territories constitutes an ecological threat as it becomes an invasive exotic plant.
Specifically, Aegopodium podagraria has diuretic, purifying, vulnerable and aromatic properties. It contains small quantities of essential oils, carotene (in the root) and a saponin (in the fruits), vitamin C and calcium.
Folk medicine attributes to the Ground elder root eminent diuretic and anti-gout properties. A famous 19th century herbalist suggested it as valid for osteoarthritis, sciatica and gout.
It is also recommended for outdoor use, especially in the fresh state, especially for insect bites, small wounds and abrasions.
The fruits of the Ground elder are diuretics and the tender leaves are sometimes mixed, as a purifier, with salads. Boiled like spinach and seasoned with butter, they were in the past considered a delicacy.
A variegated form is cultivated as an ornamental plant, albeit with the advice of keeping it isolated because of its ability to easily escape the place of cultivation.
From an ecological point of view, the Aegopodium podagra ria, throughout Eurasia, is used as a food plant by the larvae of some species of lepidoptera.

Method of Preparation –
The Ground elder, as mentioned, above all for its young and tender leaves, is edible, even if in modest quantities.
In the kitchen, these leaves are sometimes mixed with salads or boiled like spinach.
In the consumption of this plant it is however advisable to take the leaves just before it blooms; in fact, if it is collected after this moment, it takes on a pungent flavor and has a more laxative effect. It is possible, however, to make sure to continue to vegetate it, “pinching” the flowers, thus ensuring that the plant remains more edible.