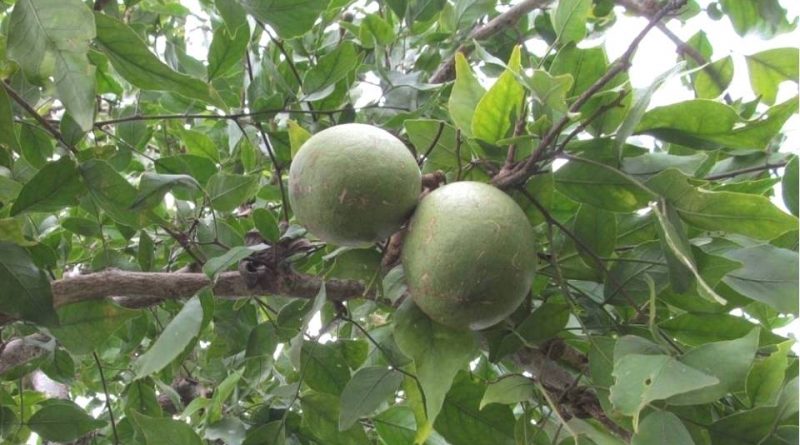 The Bael (Aegle marmelos L. Corrêa) is an arboreal species belonging to the Rutaceae family.

Etymology –
The term Aegle comes from Aegle, name of a nymph of the Hesperides: reference to Linnaeus (and, before him, Giovanni Battista Ferrari) who defined the citrus Hesperides or fruits of the Hesperides.
The specific epithet marmelos comes from the old Galician (from Latin and the ancient Gallaic-Portuguese) marmelo, in turn from the Latin melimelum, i.e. sweet apple, and still from the ancient Greek μελίμηλον (melímēlon), union of μέλι (méli, “Honey”) + μῆλον (mêlon, “apple”).

Geographical Distribution and Habitat –
Aegle Marmelos is a plant native to the Indian subcontinent and Southeast Asia and is grown in Sri Lanka, Tamil Nadu, Thailand and Malaysia.
Its habitat is represented by dry forests, both in the plains and in the hills, at altitudes from 0 to 1200 m a.s.l., with average annual rainfall of 570-2000 mm. 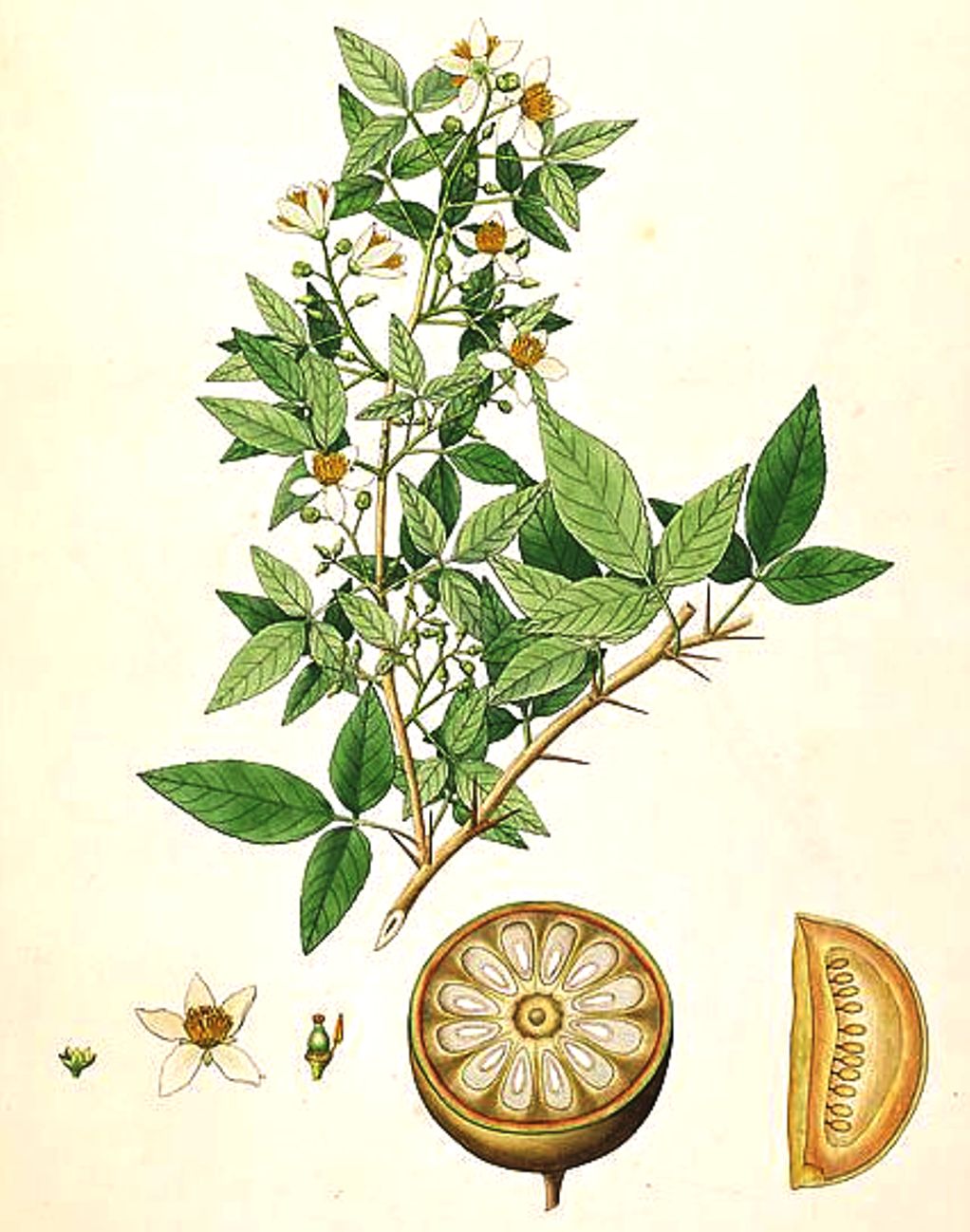 Description –
The Bael is a shrubby or arboreal plant that grows up to 13 m, with slender hanging branches and a little leafy crown.
The trunk has a bark of light brown or grayish color, smooth or finely cracked and scaled, with the presence of long straight spines, of 1.2–2.5 cm, present singly or in pairs, often with the presence of a slimy sap that comes out of the cut parts.
The solidified sap that oozes from incised or injured branches is light in color, with a rubbery consistency, similar to gum arabic, which gradually becomes solid. It has a sweet taste at first taste but then irritating the throat.
The leaves are trifoliate and alternate, with dimensions of each flap of 5-14 x 2–6 cm, ovate with a tapered or pointed tip and rounded base, toothed or with shallow rounded teeth. The young leaves are pale green or pinkish, finely hairy while the mature leaves become dark green and completely smooth. Each leaf is characterized by 4-12 pairs of lateral veins that join the margin.
The flowers are small, 1.5 – 2 cm, pale green or yellowish in color, sweetly scented, bisexual, with unbranched clusters and hanging from the apex of the twigs or leaf axils. These usually appear with young leaves. They have a flat calyx with 4 (5) small teeth. The four or five 6-8 mm petals overlap in the bud. Many stamens have short, light brown filaments and anthers with a short style. The ovary is bright green with an inconspicuous disc.
The fruits have a diameter between 5 and 12 cm., Are globular or slightly pear-shaped with the presence of a thick and hard skin that does not come off when ripe. The exocarp is woody, smooth and green – gray, until it turns yellow when ripe. Inside there are 8 to 15 (20) sections with an orange pulp, with each section containing 6 (8) to 10 (15) flattened-oblong seeds, each about 1 cm long, which bear hairs woolly and, in turn, each enclosed in a bag of adhesive and transparent mucilage which solidifies by drying.

Cultivation –
Bael is a plant that can be grown in soils with a very varied pH, which can oscillate from 5 to 10, is that it also tolerates water stagnation and with high tolerance at temperatures ranging from -7 to 48 ° C.
The fruit ripening is very slow (about 11 months) and these can reach the size of a large grapefruit or pomelo, or even larger.

Uses and Traditions –
The Bael is a tree considered sacred by the Hindus which has been used by the inhabitants of the Indian subcontinent for over 5000 years.
The first evidence of Bael’s religious importance appears in Rig Veda’s Shri Shuktam, who venerate this plant as the residence of the goddess Lakshmi, the divinity of wealth and prosperity. Bael trees are considered an incarnation of the goddess Parvati. In fact, these trees can be seen near Hindu temples and their home gardens.
In the traditional practice of Hindu and Buddhist religions, of some populations, the Bael tree is part of a fertility ritual for girls known as Bel Bibaaha. The girls are “married” to the Bael fruit; as long as the fruit is kept safe and never breaks, the girl can never become a widow, even if her husband dies. This is a ritual that guarantees the high status of widows in the Newar community compared to other women in Nepal.
The leaves, bark, roots, fruits and seeds are widely used in the traditional Indian system of Ayurveda medicine and in various popular medicines to treat a myriad of ailments.
Bael fruits are for dietary use and the fruit pulp is used to prepare delicacies such as murabba, puddings and fruit juice.
The internal pulp is of an intense orange color: soft and almost gelatinous, it has a flavor strongly reminiscent of citrus fruits, from grapefruit to lime, but also the most exotic papaya. The scent is strongly aromatic, a fact that makes this fruit suitable for both sweet and savory recipes.
Bael fruits are also used in the treatment of chronic diarrhea, dysentery and peptic ulcers, as a laxative and to recover from the respiratory affections of various popular medicines.
Some scientific studies would confirm many of the ethnomedicinal uses and relationships that indicate that the fruit has a wide range of therapeutic effects which include washing of free radicals, antioxidant, inhibition of lipid peroxidation, antibacterial, antiviral, antidiarrheal, gastroprotective, anti-ulcerative colitis, hepatoprotective, antidiabetic, cardioprotective and radioprotective effects.
Furthermore, the nutritional values, phytochemistry and pre-clinical pharmacological properties of the Bael fruit are critically evaluated. An attempt is also made to emphasize the dietary and pharmaceutical potential of the bael fruit which has been largely underutilized and neglected.
This plant contains furocoumarins, including xantotoxol and the methyl ester of alloimperatorin, as well as flavonoids, rutin and marmesine, as well as a certain number of essential oils. In addition, eglemarmelosine is extracted from the essential oil of the fruit.
From a nutritional point of view, Bael is a decidedly caloric fruit: 100 grams, in fact, correspond to about 130 or 140 calories. Of this weight, 32 grams are represented by carbohydrates, followed by 2 grams of protein and a negligible fat content. The fiber intake is absolutely important, with 3 grams for the same reference weight, while the quantity of micronutrients is equally significant: on the mineral salts front, sodium, potassium, iron, phosphorus and calcium stand out, while for the vitamins are listed groups A, B, C and E.
The nutritional characteristics explain a large part of the benefits, already known, as mentioned, by the local populations.
The good supply of fiber, for example, can help restore the natural regularity of the intestine, both in cases of constipation and diarrhea. The pulp also stimulates the production of gastric juices, making digestion easier, while vitamins contribute to the body’s well-being. Vitamin C is known for its ability to strengthen the immune system, while vitamins A and E have an antioxidant effect, ideal for contrasting free radicals and cellular aging processes. The oil extracted from the fruit is used for the treatment of some mild ear disorders, while it seems that some Bael active ingredients may be useful for the control of diabetes, even if further studies are needed.
Finally, please note that, however, the fruit has a high sugar content.
As already mentioned, consumption must always be examined with the doctor, to exclude personal hypersensitivity, allergies and drug interactions. Undesirable effects usually occur with excessive intake, with important gastrointestinal disorders as well as irritations, due to the resins present on the exocarp.
From an ecological point of view, the tree is a food plant for the caterpillars of the following two butterflies: the Papilio demoleus and the Papilio polytes.

Method of Preparation –
The fruit of the Aegle marmelos is somewhat hard, so much so that it must be broken with a hammer or a machete. The fibrous yellow pulp is very aromatic with a sweet and pleasant taste, although spicy and slightly astringent in some varieties. It resembles, even in consistency, a jam, with a flavor between citrus and tamarind.
The fruit is usually eaten fresh, possibly well ripe, therefore without any green spots on the external surface, then breaking the exocarp until it reaches the internal pulp. The pulp can be consumed directly or, again, can be used as a flavoring for many recipes, both sweet and savory. Furthermore, juices, jams, syrups, sweet creams and much more can be obtained from the pulp. In Asia, and in India, in particular, Bael is also dried in slices, the latter then consumed over time as a crumbly snack or as an accompaniment to drinks.
The juice, if fresh, is filtered and sweetened to make a drink similar to lemonade or to prepare, among others, the sharbat which is a typical drink of the Middle East and South Asia consisting of fruit or flower petals. It is a sweet product that should be served cold; it can be served in a thick and sorbed form with a spoon or diluted in water to be enjoyed as a fresh drink. It can be transformed in various ways and eaten even cold.
A large fruit can produce five or six liters of sharbat.
The leaves and small shoots are eaten as a green salad.