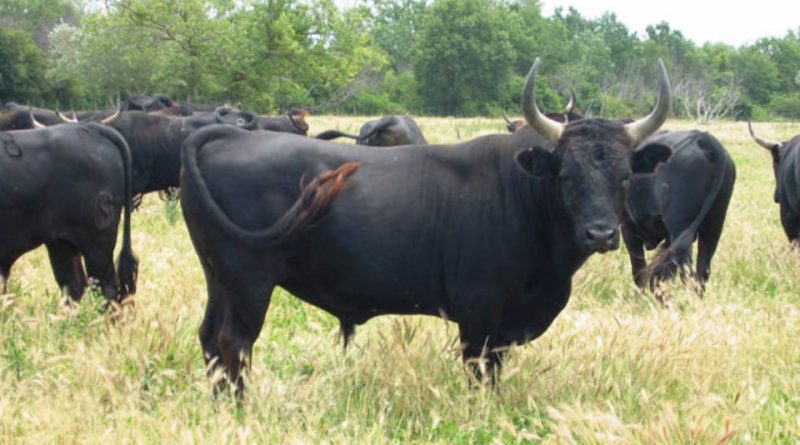 The Camargue or Raço di Biòu is a bovine breed (Bos taurus Linnaeus, 1758) native to the swamps of the Camargue in the delta of the Rhone river, in the south of France, for sport and for the production of meat.

Geographical and Area Distribution –
The Camargue breed has long been bred in semi-wild conditions in the wetlands of the Camargue, in the Bouches-du-Rhône department in the Provence-Alpes-Côte d’Azur and Petite Camargue regions, in the Gard department in the ‘Occitan.
Together with the Brava (or Race de Combat) it is one of the two cattle breeds bred in the area. Currently the total number of animals raised ranges from 10-12,000, distributed in a hundred farms.

Origins and History –
The Camargue is an indigenous breed from Provence, France, where it is still bred in the wild, both in summer and in winter.
This breed was once used for traditional sport (the camarguaise) which is a kind of bullfight. Since 1996, the year in which the herd book was created, it has been officially named with the Provencal name of Raço di Biòu and the meat from the two races of the Camargue, or from crossbreeds between them, has received the status of Denomination of Origin Controlled as “Taureau de Camargue”.
Both the Camargue and the countryman Brava (which is a fighting breed) have a close connection and history with the rural and cultural traditions of the Camargue.
This breed is widely bred in the wetlands of the Camargue. Livestock contribute to the maintenance of large areas of the Camargue wetland and also represent a tourist attraction.
The administration of the Camargue Natural Regional Park participates in various aspects in the management of the breed, including the registration of births and mates and, of course, the organization of the Camarguaise.

Morphology –
The Camargue breed is recognized for having a uniformly black, or sometimes dark brown coat.
The mucous membranes are dark. The horns are large, long and facing upwards, with gray color at the base, cream white in the center and dark at the tips.
These are small-sized animals, with females having an average height of 120 cm and a weight of 200-270 kg and males a height of 130 cm and weight of 300-450 kg.

Productive attitude –
The Camargue or Raço di Biòu is a breed bred mainly for traditional sport, which is a type of bullfighting, not a bloody one, in which castrated animals are used.
In the ring, the so-called “raseteurs” must try to remove a cockade from the bull’s forehead. The oxen are carried on foot in the arena by the mountaineers (the abrivado), and they return to the herds in the same way (the bandido).
The meat of the Raço di Biòu breed, together with that of the Brava breed and at the crossbreeds between the two, can be marketed but under strict pasture and breeding area conditions and with production methods that respect the Denomination of Controlled Origin; the animals that participated in the performances in the arena are excluded. The cattle sold every year for meat are around 2000.