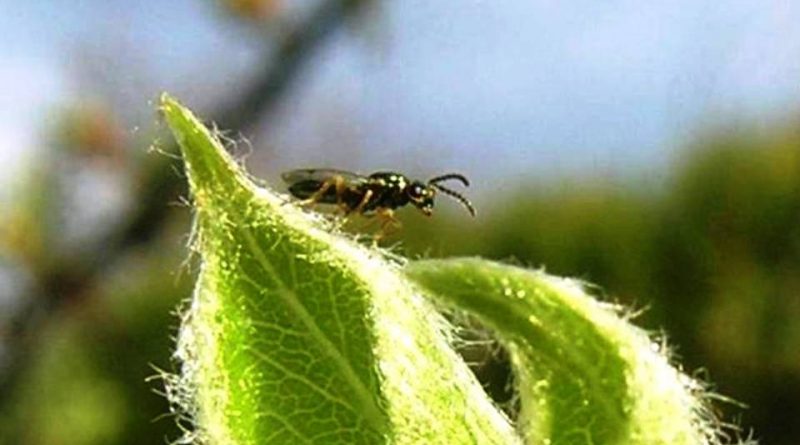 The Cecidomia del pear (Contarinia pyrivora Riley, 1886) is a small diptera belonging to the family of Cecidomyiidae.

Geographical Distribution and Habitat –
Contarinia pyrivora is an insect present in Europe and distributed in the pear cultivation area, a plant with which it is fenced.

Morphology –
The cecidomy of the pear tree is a small diptera whose adults measure from 2 to 3 mm, ocher-grayish in color with a dark strip in the abdominal region.
The legs are long and brown.
The head is black and brownish antennae.
The thorax is black. The wings are well developed, slightly grayish in color, the legs are short and dark.
In the female, the ovipositor is noted, which can stretch and reach the same length as the body.
The eggs measure 0.3 x 0.1 mm and the larva from 2.5 to 3 mm, whitish in color, are tapered on both ends and have a marked transverse segmentation. The sternal spatula is well developed; they are also apode and lead endophytic life, within the fruits.

Aptitude and biological cycle –
The adults of the Contarinia pyrivora appear in the spring at the end of March or at the beginning of April, in the late flowering-fruit set phase of the pear tree. The flight duration varies from 5 to 14 days. Mating and spawning take place immediately after birth. The female places her ovipositor insinuating it between the sepals and the petals and laying her eggs in packs of 12 to 15 on the anthers or pistils. The duration of embryonic evolution varies from 4 to 5 days, while larval development from 4 to 6 weeks.
The young newborn larvae enter the ovary. At the end of their development, they abandon the fruit through some cracks or by perforating the epidermis, jump and hide in the soil at about 5 cm deep; each of them packs a cocoon and passes to the lymphosis stage. The Cecidomia del Pero then winters as a mature larva or as a pupa, in a rough bed of the soil.
In this way, the cecidomy of the pear tree takes one generation a year.

Ecological role –
The damage caused by Contarinia pyrivora is evident on the fruits and is determined by the larvae that colonize the central part of the young fruits.
The presence of the larvae causes deformation and accelerated growth of the ovary in which they develop. In late April or early May, the attacked fruits differ from healthy fruits by more voluminous size and an irregular more or less spherical shape.
The small fruits thus affected, in addition to deforming in a characteristic way, therefore stop their development and necrotize.
The fruits remain attached to the plant, like small blackish mummies to fall to the ground in later times.
With regard to the precautions to minimize the damage of this insect, preventive measures can be taken which must however be thought above all of the pereto plant. The excessive specialization, the lack of hedges that host the antagonists of this insect, the excessive use of pesticides in the area are all contributing factors that tend to unbalance the biocoenoses of insects and antagonistic parasites favoring Contarinia pyrivora.
Furthermore, always on the subject of preventive interventions, we recommend the working, even superficial, of the soil to reduce wintering forms, which certainly help to keep the weed potential low.
As a preventive treatment, an anti-insect veil can also be installed, which should be installed from May to July.
Always on the subject of interventions of an eco-sustainable nature, we recommend, at the time of flowering, a spraying with an infusion of tansy and a preparation consisting of 15 to 30 grams of Marseille soap per liter of water.
If necessary, we recommend also spraying an absinthe infusion.
The chemical fight against Contarinia pyrivora should be seen only as a last resort and, in any case, only to save annual production, after which serious and concrete programs of biological control and appropriate agronomic techniques must be set up.
In fact, we only intervene with the chemical fight if there have been repeated infestations in the orchard over the years. In these cases, the treatment must be carried out at the phenological phase of the outcropping bunches, with evident petals but with a closed flower.