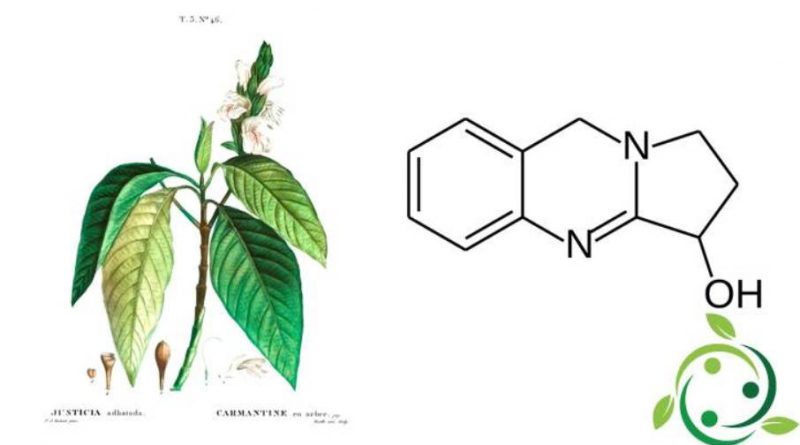 Vasicine (or peganin) is an alkaloid similar to quinazoline which is an aromatic heterocyclic organic compound, structurally formed by a condensed benzene and pyrimidine ring.
Vasicine, whose term in the official IUPAC nomenclature is: 1,2,3,9-tetrahydropyrrol [2,1-b] quinazolin-3-ol has a brute or molecular chemical formula: C11H12N2O.
Vasicine is an alkaloid found in nature in some plants such as in the Justicia adhatoda, from which it takes its name, and also in the Peganum harmala.
Due to its therapeutic characteristics, vasicine has been compared to theophylline both in vitro and in vivo.
This molecule has also been studied in combination with vasicinone, which is a related alkaloid.

The combination of both alkaloids showed marked bronchial dilatation activity, both in vivo and in vitro; moreover these two alkaloids are also respiratory stimulants.
Among the other properties of vasicin its cardiac depressant effect is underlined, while vasicinone is a weak cardiac stimulant; in any case, the effect can be normalized by combining alkaloids.
Other studies have found that vasicine has a uterine stimulating effect.
A molecule, structurally very similar to vasicine is bromhexine; the latter molecule is one of the components used in medicine for the treatment of cough for its mucolytic properties; in fact it increases the production of serous mucus in the respiratory tract which makes the phlegm thinner and less viscous, which allows the eyelashes to transport the phlegm more easily from the lungs.