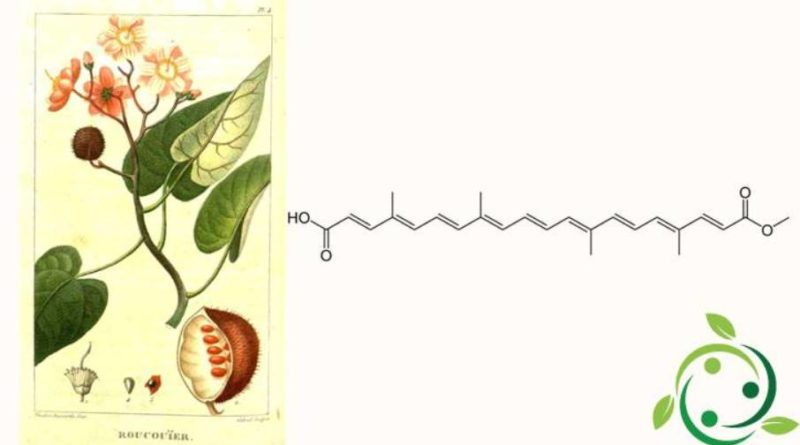 Annatto is a natural extraction dye derived from carotene extracted from a plant originally from South America and the Amazon, which is Achiote (Bixa orellana L.).
This dye has a brute or molecular formula: C24H28O4 and in the European coding of food additives it is classified with the initials: E160b.
Annatto is a reddish-yellow dye whose structure derives from the carotene extracted from Bixa orellana, but also present in other plants.
Annatto, in Asia and South America, is a very widespread spice, obtained from the seeds of Achiote, but not very known in the West for its properties, but only as a coloring agent.
In the places of origin, this substance is extracted from the seeds immersed in boiling water and left for the time necessary to give color to the water, which will then color the fabric.
The dye is contained, in fact, in the red epidermis of the seeds, from which it is extracted in the ratio of 120-160 g per 100 kg of seeds. The extraction of the dye can take place in two ways: with oily solvents or with aqueous alkalis. In the first case, a solution is obtained containing various dyes, of which the most abundant is bixin (or bissin), present in both cis and trans form (C.I. 75120 – Natural Orange 4). In the case of extraction with alkali, norbissin is obtained, a product of hydrolysis of bissin, in the form of salt, generally sodium or potassium depending on the alkali used, also in cis and trans form. By acidification of the solution the dye is obtained as free acid. Bissina has the formula C25H30O4 and P.M. 394.
Annatto is one of the oldest dyes used, and has been used for over 100 years both in Europe and in the USA to color margarine and cheeses.
The seeds are one of the spices used in cooking to flavor dishes and to give the dish or dessert a reddish color.

The water where the seeds are boiled, which causes them to lose their color, can then be used to cook vegetables, meat or rice.
In Central and South America it is mainly used as a coloring agent. In particular in the Caribbean the seeds are fried with oil or other animal fat and the colored dressing that is obtained is used to cook meats and vegetables. In Mexico, seed paste mixed with vinegar is used to marinate the meat.
In the Philippines, seeds are ground and added to soups.
In Vietnam, it is used to color soups, curry or for duck lacquering.
Seeds and dust should be stored in a container protected from light.
The use as a food coloring is allowed both in the E.U. (item E160b of the list of food additives) and in the USA (dye without certification). It is used to obtain shades from yellow to yellow-red.
In Italy, the current food legislation (DM February 27, 1996 no. 209) allows, in addition to the uses already mentioned, the coloring of ice creams, liqueurs, desserts, breakfast cereals, decorations, baked goods, emulsified fats, snacks and smoked fish.
Experiments have also been carried out for the use of annatto as a pigmenting agent in aviculture, but with results lower than those achievable with xanthophylls and other carotenoids.
Furthermore, in the cosmetic field, annatto can be used in make-up products, in particular reds for lips, but it can also be used in toothpastes and emulsions, if you prefer to use a natural product instead of a synthetic dye. It is also used to give an orange color in homemade soaps (added at the end of processing and before putting in the mold).