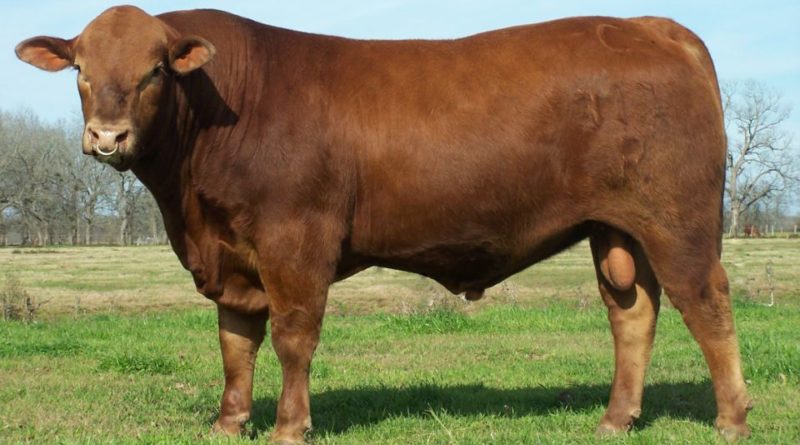 The Red Brangus (Bos taurus L. and Bos taurus indicus crossbreed) is a bovine breed originating in the United States of America with an aptitude for meat production.

Geographical and Area Distribution –
The Red Brangus is a breed of cattle that, due to their adaptability, especially in countries with tropical and sub-tropical climate, have spread, starting from 1930, progressively all over the world.
Among the major breeding countries we remember, first of all the United States, the country where the breed was created, Australia, with the introduction in this country around the 50s of the last century, Canada; it is also a breed widespread in other countries such as South Africa, Argentina, Zimbabwe, Central America and South America, and in other countries where it is spreading for versatility in different climatic and food conditions.

Origins and History –
The origin of the Red Brangus breed dates back to 1912 in Jeanerette (Louisiana) where the cross between the Red Angus breed of cattle and the Zebu Brahman breed begins.
The hybridization of the breed has been stabilized with animals that have 3/8 of Brahman blood and 5/8 of Angus blood.
Subsequently, the experimentation was also carried out to verify the suitability of the breed to be bred in adverse weather conditions.
So Red Brangus breeders from over 16 states and Canada organized the American Brangus Breeders Association, which was renamed the International Brangus Breeders Association (IBBA).
The animals raised in Argentina, Australia, Canada, Central America, the United States of America, Mexico and Zimbabwe were enrolled in the IBBA as of 2 July 1949.

Morphology –
Red Brangus is a breed of cattle characterized by a more or less intense red coat, shiny and elegant.
The ears are medium to large in size and with the skin around the neck typically folded.
It is a generally acorna breed, with a flesh-colored red muzzle.
These are animals whose weight is on average 850 kg, but can reach up to 1000 kg for males and 550 kg up to 700 kg for females.

Productive attitude –
Red Brangus is a breed with a prevalent aptitude for meat production.
Overall it is a breed with an extremely docile and calm temperament, and extremely versatile, being able to be bred in various conditions both on pastures and with controlled feeding.
Although Red Brangus prefers warm and warm climates, it has been noted that they develop a thicker coat when this breed is bred in colder climates.
At calving, calves have a relatively low weight, which facilitates mothers, but that within 400 days their weight becomes high, showing a remarkable growth index.
Red Brangus also reaches puberty substantially earlier than other breeds; the heifers (older than 12 months but who have not had calves) are usually ready for breeding at 14 months of age and at birth 9 months later. Likewise, the bulls have matured and can be used as breeding stock.
Both males and females maintain their fertility and productivity beyond many other breeds, with bulls capable of being used as breeding animals over 10 years and cows capable of giving birth up to 15 years.
Overall, Red Brangus is also an extremely healthy animal and known for its resistance to diseases and adverse weather conditions.
In fact, these animals are able to thrive both in regions with high temperatures and humidity but also in cold and freezing conditions.
This resistance is also due to the red color of its coat which is able to reflect light rather than absorb it.